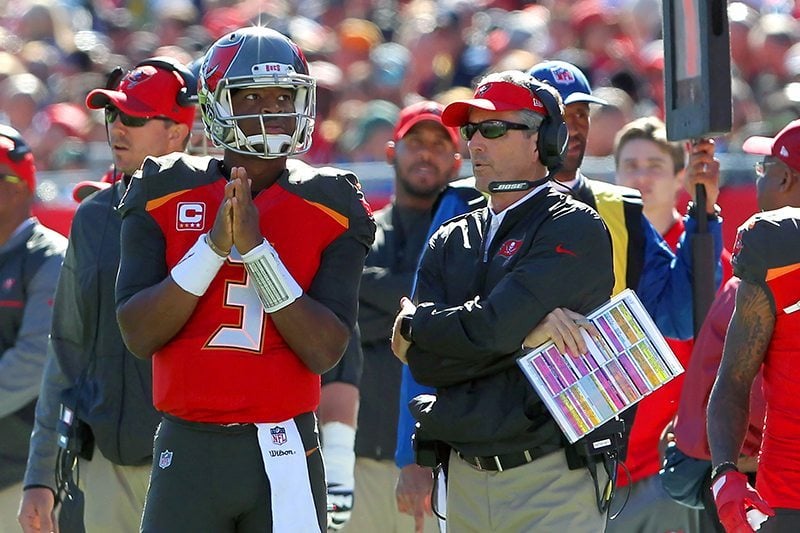 It was a quiet Thursday at One Buc, the combination of a sense of focus on Sunday’s opponent with the reality of a disappointing season coming to an end.

Still, despite injuries and other misfortune in 2017, the Bucs locker room has held together. Guys still have plenty to play for over the next two weeks, jobs included. Optimism persisted from the podium, as offensive coordinator Todd Monken insisted that the offense is and has been this close to finishing drives.

Here are four things we learned at One Buc Place on Thursday.

A Rivalry That Goes Back

He smiled talking about the little rivalry and respect they have for each other. pic.twitter.com/odvxirkRJF

Both grew up in Alabama, Winston in Bessemer and Bradberry just north of Pleasant Grove, where they competed against each other from Little League to high school.

Winston’s Bessemer Tigers topped Bradberry’s Hueytown Saints in Little League, but the future Carolina pro helped hand Winston his only regular season loss during his junior year at Hueytown. “He had a great game,” Winston said about the loss to Pleasant Grove High.

In the NFL, the series is 1-1 – though Bradberry left a mark even in a Bucs win, as he intercepted a Winston pass in last season’s finale.

Bradberry, a second-round pick out of Samford in 2016, has drawn praise this week from coach Dirk Koetter and offensive coordinator Todd Monken. Since effectively replacing All-Pro Josh Norman last year, Bradberry has come into his own in the Panthers’ secondary.

Regarding premiere pass-catchers, can less be more?

With the addition of Desean Jackson in free agency and O.J. Howard in the draft, many expected that a bolstered receiving corps would come at the expense of individual statistics. There’s only one ball to go around.

Mike Evans has 24 fewer catches than he did at the same point last season, while Desean Jackson has nearly 200 fewer yards. The Bucs, of course, want to get the ball to playmakers and maximize their specific skill-set. But that can create some pressure for coaches.

“There is something to making sure, ‘Hey, are we getting our best players, who do this, enough touches?’” offensive coordinator Todd Moken said. “We go through that every week. Last year was, ‘Hey, how do we move Mike around and get him the ball.”

While Monken thinks the Bucs have done a nice job spreading the ball around this year, he conceded that they could do a better job finding Jackson in space, where the sub-4.4 receiver is lethal.

“He’s one of those guys who can get yards after the catch,” Monken said. “I’m not saying on screens, but when you get him in space he can run away from people. You say, ‘How do we do that better with him, how do we get him the ball more in space?’”

#Bucs OC Todd Monken elaborates on whether "too many weapons" can be a thing: "There's something to that… last year it was just how can we get Mike [Evans] open… now there's components." pic.twitter.com/1ltRRD1QoO Desean Jackson missed practice for a second straight day with an ankle injury. If he’s unavailable for Sunday, expect Chris Godwin to see a larger role.

Godwin made his first start in Week 10 – catching five passes on 10 targets against the Jets – and has played significant time the last two weeks. He played over 60 percent of the snaps against Detroit and Atlanta, after ranging between 20-30 percent through his first 10 of 11 games.

There are high expectations for the Penn State rookie’s future in Tampa.

“You’re disappointed when a player [like Jackson] doesn’t get the opportunity and they get banged up, but Chris has earned [playing time],” Monken said. “Chris has gone out there and played really well. There is a reason why we drafted him. We think a lot of him.”

Two other young players on the receiving depth chart are Freddie Martino and Bobo Wilson. Monken said this is a good time for them, like many inexperienced guys, to get reps. He said he’d be excited to see those two if the opportunity presented itself.

“They’re different players in what they bring. Freddie has done fine when he has had his opportunities here,” Monken said. “You’re always excited about the next guy because everybody we have in that locker room is the best in the world. We’re not dropping down to somebody that you just pick up off the street. No, we are talking about some of the best in the world that wherever they came from before they got here, they were elite.”

Bucs Not Looking Back

From Hurricane Irma postponing Week 1 to a ref tripping during precious seconds in Week 15, some of the Bucs misfortune in 2017 has been out of the team’s control.

“Of course, there [are] going to be situations that everyone has [bad luck], but we’ve just go to focus on what we can control and we’ve got to execute to perfection,” he said.

Winston said it hurts to miss the playoffs but that the Bucs have plenty of pride to play for in the final two weeks.

“It’s going to be beautiful when we continue to fight, continue to give our all and scratch out two wins, starting with this one,” Winston said. “We’ve got to fight. Our season isn’t over, especially not to me and to the guys in that locker room. No matter who we have out there, our job is to play football and we’ve got to find a way to win.”

Zach is entering his 3rd year covering the Tampa Bay Buccaneers as a writer for PewterReport.com. Since 2014, he's handled a large part of the beat reporting responsibilities at PR, attending all media gatherings and publishing and promoting content daily. Zach is a native of Sarasota, FL, and a graduate of the University of Tampa. He has also covered high school football for the Tampa Tribune and the NFL for Pro Player Insiders. Contact him at: [email protected]
Subscribe
Login
Please login to comment
8 Comments
Oldest
Newest
Inline Feedbacks
View all comments

go to nfl and check out Gil Brandt’s rating of the young qb’s . Wentz is 1st.

And your point is what exactly?

Gil Brandt has Winston rated 8th of the top 10 youg qb’s while M.M. is rated 4th…I guess he doesn’t have much of a man crush on bucs qb.

Yeah I read the article it reads like an excuse list for mariota. First he said the offense holds him back back, then makes excuses for his injury, all while failing to mentionnothing about Jameis’ injury. But hey he did mention he likes that mariota is a nice guy, he’s got that going for him. But hey maybe mariota will let you sign his cast when he goes for what probably will his third straight offseason with surgery. Just go root for the titans sunshine I guarantee you you won’t be missed clown.

Who cares what Gil Brant, or you for that matter think about Winston. Jameis is our Q.B., not Wentz, not Mariota. There are 31 other teams in the NFL you can root for. If you have a crush on some other Q.B. ask your mommy to get you his jersey for xmas. Being a Buc fan is like being a family member. You may not always like, or agree with your brother, but you can’t just get a different one.

Sunshine, your responses read like homerism for your boy mariota. he wouldn’t last six weeks behind this offensive line and he has a running game as well. In fact mariota has regressed a lot this year and that’s a fact. I just don’t understand your hate for Jameis so much. THeres 31 other teams that’s would love to have you root for them. Get behind your team and quarterback or get lost. It’s simple.

IMO the Bucs are trying to much and to early in games to get the ball to Jackson. After he left the game last week Evans was the main target. Also has ANYONE seen Jackson blow by anyone I do not mean a step or two I mean 5 or so yards?

j have season tkts when most of the clown comments do not . .. Just be real . Winston was 1st pick in draft and most national media thinks he has been passed by with the other youg qb’s in the nfl. Did the bucs make a mistake drafting him?