A Look At The Bucs’ Checklist For The Combine

Home » Articles » A Look At The Bucs’ Checklist For The Combine 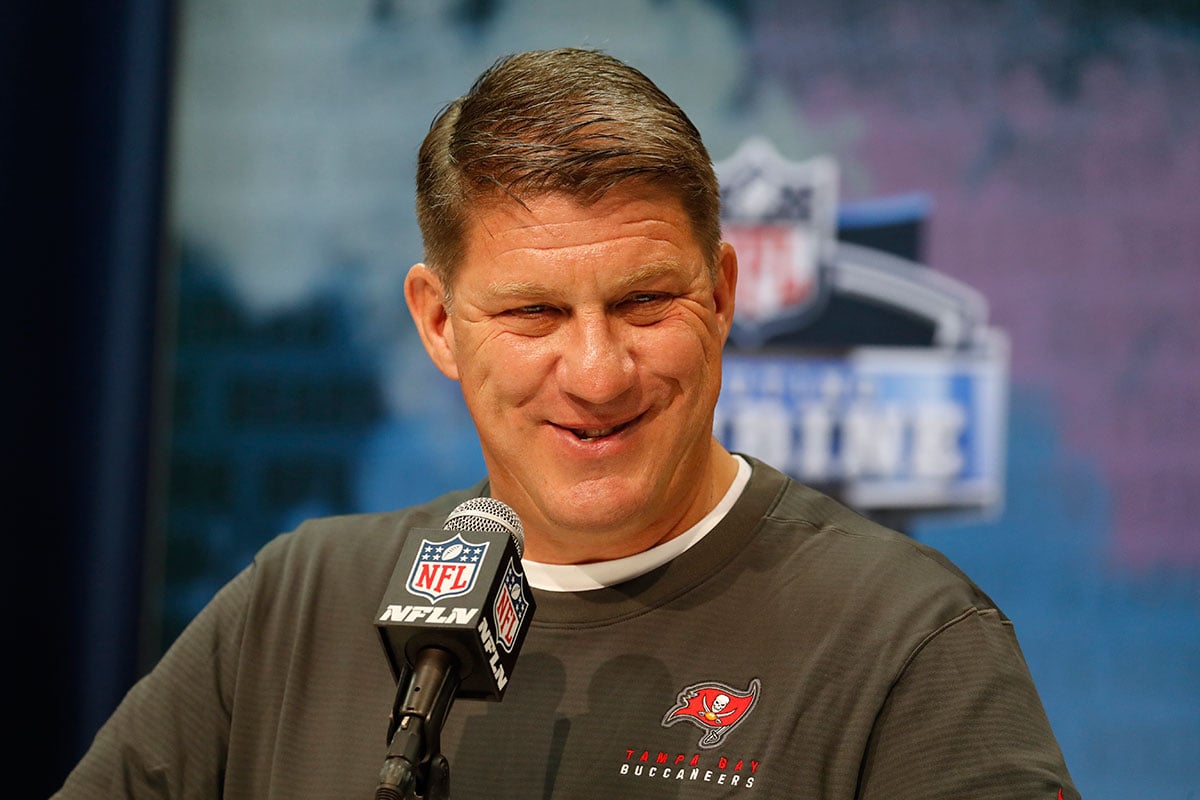 A Look At The Bucs’ Checklist For The Combine

Home » Articles » A Look At The Bucs’ Checklist For The Combine

The Bucs are in Indianapolis for the 2022 NFL Scouting Combine and the team has plenty of things to accomplish this week. Tampa Bay general manager Jason Licht and head coach Bruce Arians will be speaking with the media today beginning at 1:00 p.m. ET. Here’s a peak at what the Bucs’ Combine checklist probably looks like.

Last year the Bucs were coming off a Super Bowl LV victory and were focused on re-signing all 22 starters for another run. Licht and his coaching and scouting staff engaged in scouting for “luxury” draft picks. Without any open starting spots, the players drafted last year were all considered to be “future” contributors. That’s not to suggest that the scouting staff slacked off at all. But there is added pressure to find legit plug-and-play starters this year like the team found in 2020 with right tackle Tristan Wirfs and safety Antoine Winfield, Jr.

My how things have suddenly changed in Tampa Bay where the future is now. With the retirement of quarterback Tom Brady and guard Ali Marpet – and possibly more coming if tight end Rob Gronkowski and/or defensive tackle Ndamukong Suh decide to call it a career, too – the Bucs now have multiple holes to fill. The team didn’t need to find any starters in last year’s draft. Tampa Bay may have to find as many as three or four starters in this year’s draft class depending on how it fares in free agency.

Bucs Will Look Behind Door No. 2 For A QB Two years ago, Arians let it slip at the Combine that the first quarterback he was going to call in free agency was Brady. Was that a signal to Brady’s camp that the Bucs were interested? You bet it was, and a few weeks later Brady was a Buccaneer.

Ask Licht about the best part of acquiring Brady and he’ll tell you that aside from simply landing the future Hall of Famer, it was the fact that he didn’t have to give up any draft picks to do so. Now if the Bucs want a big-name starter they’ll have to trade for one. The problem is teams like Green Bay, Seattle and Las Vegas don’t seem interested in dealing their QBs. Licht will use the Combine to do to his due diligence and probe the trade potential other general managers, but he’s bracing for a chorus of “no thanks.”

As the NFL world descends on Indy, doesn’t seem like any blockbuster QB trades are percolating

Seems like all the big names will stick. Perhaps in part because of a weak draft class

Nearly all negotiations over everything in the NFL come down to the wire. That’s no different in Tampa Bay where the Bucs re-signed outside linebacker Shaquil Barrett at the eleventh hour before he hit free agency. This was despite having an entire year to hammer out details with Barrett playing on the franchise tag in 2020. The same thing is expected to happen with wide receiver Chris Godwin, who played on the franchise tag last year.

The Bucs believe contract negotiations to heat up with Godwin’s representatives this week in Indianapolis. The dirty little secret about the Combine is that is where tampering begins each year as agents begin to truly gauge what the market value is for their clients in face-to-face meetings with teams for coffee, or over dinner or out at the bars. Licht and vice president of football administration Mike Greenberg won’t strike a deal with Godwin’s agent in Indy, but they’ll lay the groundwork for one. Expect Godwin, who is coming off a torn ACL, to remain in Tampa Bay.

Tampa Bay Will Likely Use Franchise Tag On Davis Two years ago at the Combine, Pewter Report broke the news that the Bucs will not be using their franchise tag on quarterback Jameis Winston. That meant that Tampa Bay was closing the door on the team’s first-round pick in 2015. And it was a signal that the Bucs were going to make a run at a high profile QB like Brady.

If the Bucs can’t come to terms with Carlton Davis III’s agents on a long-term contract extension the team will likely use the franchise tag on him. Licht, Greenberg and Davis’ representatives will meet in Indianapolis to see if a deal can be reached. If not, the Bucs will likely know they’ll have to use the tag on Davis by March 8.

Bucs Will Have A Clearer Picture About Players’ Asking Prices

Like all teams, Tampa Bay will catch wind of some much-needed information from agents at the Combine about the market value of some soon-to-be free agents. This will help Licht and Greenberg set the Bucs’ values for free agents in the form of price tags. Tampa Bay rarely goes over the market value it sets internally to keep or acquire players in free agency. That level of discipline makes Licht and Greenberg one of the league’s top duos in terms of cap management.

The Bucs will also get some feelers about which players could become cap casualties in March and hit the free agent market as a result. Keep in mind that Licht also laid the groundwork for the trade for Jason Pierre-Paul at the Combine in 2018. Licht knows there are multiple ways to fill holes and add players.

Would be a good value pickup potentially

Finding An Inside Linebackers Coach

The Bucs lost inside linebackers coach Mike Caldwell to Jacksonville where he’ll be the team’s defensive coordinator. While the Senior Bowl is considered to be a job fair for coaches looking for work, the Combine is the job fair 2.0. That’s because it’s a central location where general managers, head coaches and coordinators are all in the same town at the same time.

When Arians is not busy interviewing draft prospects and watching drills, he could very well be interviewing coaching candidates to fill Caldwell’s vacancy. Unless Arians already has someone in mind and done those interviews. If that’s the case, he could make an announcement on his latest coaching hire in Indy. Stay tuned to PewterReport.com for all the latest news from the NFL Scouting Combine. Pewter Reporters Jon Ledyard and Matt Matera will be reporting live from Indianapolis all week.

Tune in to PewterReportTV on our YouTube channel at 4:00 p.m. ET Tuesday for reaction to the press conferences of Bucs general manager Jason Licht and head coach Bruce Arians.

Draft Wirfs-like OLine left tackle Sean Rhyne from UCLA and sign him to a rookie contract. Incredibly athletic, quick feet, very strong hands and forearms, run blocks akin to the best first rounders, at 6’5″ and 320 his pass blocking is among the best, and he can pull to his right or block straight ahead and then eliminate a linebacker. I watched him do this at four of UCLA’s home games last year and he plays 100% until the whistle is blown. Sign Rhyne and then the Bucs can have a dominating OLine with Rhyne, Jensen, and Wirfs at a… Read more »

Finding 4-5 starters in the draft is nearly impossible. Says a lot of where Bucs are now all of the sudden. Two years with Brady were fun and flew by. Now time to stink again. At least this season. Too many holes, crazy hard schedule, and no qb…hope they draft well. See what free agents are around next year at QB. I seriously doubt Trask or Gabbert are the answer long or short term. Will see.