Arians’ Legacy With Bucs Is Legendary 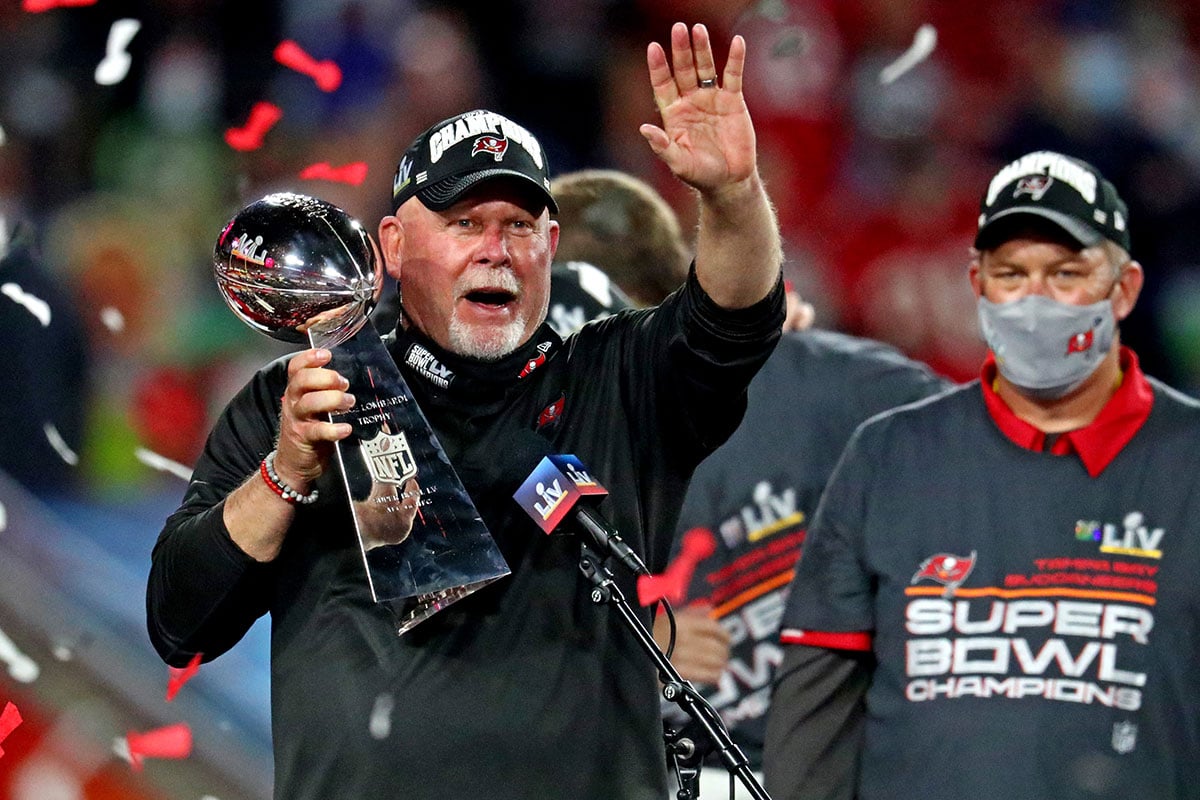 Arians’ Legacy With Bucs Is Legendary

Bucs head coach Bruce Arians unexpectedly retired from coaching on Wednesday night. Arians’ hand-picked successor, defensive coordinator Todd Bowles, will take over as the Bucs’ new head coach. Arians will stay on with the team as a senior football consultant. He will work with general manager Jason Licht on the team’s draft prep.

While his tenure wasn’t long, the legacy he has left will live on throughout the Tampa Bay area and the Bucs franchise for many years to come. That’s because Arians helped the Bucs win Super Bowl LV in just his second season as head coach.

Lured out of his first retirement in 2019, Arians replaced Dirk Koetter and inherited a team that went 5-11 in 2018. With Jameis Winston playing on his fifth-year option in 2019 the team took several steps forward. His offense was tied for third in points scored while ranking first in passing yards. In 2020, Arians was able to help recruit legendary quarterback Tom Brady to sign with the team in free agency. That season went down as one of the best in the history of the franchise. The Bucs finished 11-5, capturing a Wild Card berth in the playoffs that culminated in the second Super Bowl in team history. Arians and the Bucs followed that season up with a 2021 campaign that resulted in the most wins in franchise history (13), an NFC South title, and an appearance in the NFC Divisional Round appearance.

Arians steps down with a 31-18 record as head coach of Tampa Bay. His .633 winning percentage is the highest in team history. His 31 wins are third-most in team history behind Jon Gruden (57) and Tony Dungy (54). Arians’ 6-1 postseason record is the best in franchise history as well.

For all of his on-field accomplishments, Arians’ legacy will most certainly be felt due to how he affected the team and the community off the field. Arians’ coaching staff has long been one of the largest in the league. It has included all three of his coordinators – Bowles, Byron Leftwich and Keith Armstrong – and his assistant head coach – Harold Goodwin – being minorities. All four men are Black, and Bowles becomes the fourth Black head coach in Bucs history.

Arians has also been a pioneer in creating opportunities in the game for women. His staff currently includes two women. Lori Locust is the assistant defensive line coach and Maral Javadifar is the assistant strength and conditioning coach. Additionally, the Arians Family Foundation has helped support Florida Guardian Ad Litems.

Since his arrival, Arians has helped create a winning culture within the walls of the AdventHealth Training Center. More than that, he promoted through words and actions a more diverse coaching network throughout the NFL. And he impacted the greater area through his family’s charitable work. As a fan base there isn’t much more the Buccaneers community could have asked for.

Thanks coach, best wishes to you and your family in retirement. We will miss your candor and leadership.

I don’t think the 49 wins is right. Wish it was. I’ll sure miss B.A.’s down to earth, regular guy honesty. As Jason Licht once said, “The coolest coach in the NFL”. Commendable that even in his decision to leave coaching, he is thinking about those who have been loyal friends.

Ring of Honor for sure

Proud to be a Bucs fan, we are no longer the worst team in the NFC south, actually we are the best. Proud especially of the coaches that will takeover and what it represents. They are all Black and they got this, BA made this happen for us.LFG!!!!!!!! GoBucs!!!!!!!