We’ve repeatedly gone over the amount of free agents the Bucs have to re-sign this offseason. In his latest article, Sheil Kapadia of The Athletic takes a shot at predicting where some of the top free agents could land, including the plethora of Bucs free agents. He includes three potential options for each team in the league.

Unfortunately, Bucs fan may not like some of his predictions. Kapadia has Tampa Bay losing some pretty important free agents. First to go is tight end O.J. Howard, who lands with the Bills. He mentions a change of scenery for the former first round pick may help resurrect his career. Jordan Whitehead is lost to the rival Panthers to pair with Jeremy Chin in Carolina’s secondary.

Next on the move is Rob Gronkowski, signing with the Bengals to play with Joe Burrow. Meanwhile, Bucs guard Alex Cappa joins the Houston Texans. It doesn’t get much better from there, with Tampa Bay losing Carlton Davis to the New York Jets and Ryan Jensen to the Steelers. 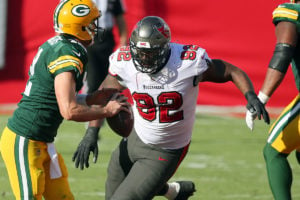 As for the Bucs, he has them re-signing defensive lineman Will Gholston. He also has the Bucs landing former Green Bay interior offensive lineman Lucas Patrick. The 28-year old lineman allowed just one sack last season in 911 snaps, but finished with a dismal 57.2 overall grade per Pro Football Focus. He played both center and guard for the Packers last season.

Rounding out the trio is former Panthers defensive lineman DaQuan Jones. The 30-year old finished the season with just one sack and a 64.4 overall grade from PFF.

“The Bucs lost guard Ali Marpet to retirement, and their two other interior starters (Ryan Jensen and Alex Cappa) are scheduled to be free agents,” Kapadia writes. “Patrick will be a less expensive option and has experience playing all three interior spots. Defensively, the Bucs could lose a bunch of guys — Jason Pierre-Paul, Ndamukong Suh, William Gholston — up front. Maybe they bring one (Gholston?) back and then add a low-cost veteran like DaQuan Jones.”

The Bucs have a lot of work to do to even attempt to re-sign their pending free agents. They made the first move Thursday when they placed guard Ali Marpet on the Retired/Reserve list, opening up $5.625 million in cap space. More moves are sure to come before the start of free agency on March 16.

Talk about a worse case scenario. I don’t see this playing out. Our GM is no fool. We may lose some of these players, but we’re not going to replace them with a bunch of free agent scrubs.
I think Howard is toast no matter where he goes. Honestly, who would want him? He in injury prone and has a questionable work ethic.
I also suspect some of these Bucs want to play for contenders. The likes of the Jets, Texans, and Panthers are going to have really overpay to get anyone to sign. Great way to kill a career.

I think some roster turnover will be good. The run defense my suffer a bit, but the secondary has been the weakest unit and change could help.

Funny how fortunes change. For the last 2 yrs our fans were. Hysterically bragging. I do believe this upcoming season we will eat a big slice of that delicious.,,.HUMBLE PIE. Unless of course a miracle appears out of nowhere. And that ain’t happening.

This is hogwash! U didn’t invest 36-37 mil for ur bookends WRs to have no OLine to block for who ever is under center. The QB must have time to get the ball to their playmakers. Big Red is gone. But Cappa should be resigned with Marpet retiring.

Never heard of Kapadia and now I know why….that scenario is very far fetched. Jensen or Cappa go….sure. Both…not happening. Regardless of who is under center, they’ll need more time than Brady ever did. It makes sense to invest in the OL and running game to lessen the pressure on someone not named TB12.

I was thinking Bucs will keep few of those guys and be a 7-9 win team most likely. Shit if this all comes true then they will be lucky to win 5 games with that schedule. This would be horrific honestly imo.

This guy is a joke. Complete stooge. There are 32 teams. no way you can pick stuff like this. Looks like he’s one of these data guys. Knows as much football as my grandmother. Make a lot of predictions and get a few right. A stopped clock is right twice a day.

we should trade back to the early 2nd, pick up a mid 2nd, swap 3rds, and grab Breece Hall with the first 2nd, and grab a CB and grab one of the best OG/C in the draft, with the other two 2nds. All while letting LF and Jensen walk, and resigning Cappa. In the 3rd, I’d grab a TE. This is a very deep TE class. This is the type of draft that I’d want to load up on as many 2nd and 3rd round picks as we can. Because it’s a very deep draft at several positions(WR, TE, CB,… Read more »

Looks like this guy thinks Hugh Culverhouse still owns the team and Bruce Allen is managing the salary cap.