Barber Has The Look Of Bucs’ Starting RB

Home » Articles » Barber Has The Look Of Bucs’ Starting RB 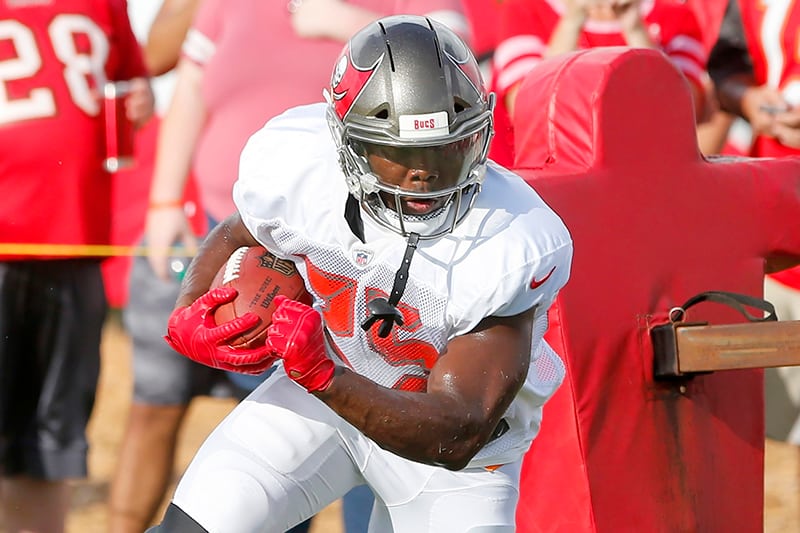 Barber Has The Look Of Bucs’ Starting RB

Home » Articles » Barber Has The Look Of Bucs’ Starting RB

The Buccaneers spent the first of the three second-round picks in this year’s draft on USC running back Ronald Jones, expecting him to possibly contend for the starting job during his rookie season.

So far three weeks into training camp and half way into the preseason, third-year running back Peyton Barber is saying, “Not so fast.”

Through the first two preseason games Barber seems to have a stranglehold on the starting job. He’s rushed for 53 yards (5.3 avg.) and 10 carries with one touchdown. Bucs head coach Dirk Koetter said that Barber has the look of an NFL starting running back. 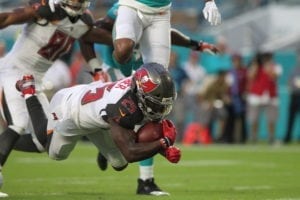 “Yes, he does,” Koetter said. “Exactly what he should be doing. You know, he only had five carries last night, but he averaged over five yards per carry. He had an explosive run. You guys have talked to him. Peyton is a very serious guy. He’s got his eye on the prize, right where it should be. He’s doing everything he should be doing right now. I think if we went out there and gave it to Peyton 20 times, we’d like what he does, but you’re probably not going to do that in a preseason game.”

Barber led the Bucs in rushing last year with 108 carries for 423 yards (3.9 avg.) and three touchdowns, stepping in for a disappointing, oft-injured Doug Martin, who was released in the offseason. He’s running with determination, power and some wiggle, as he showed on an 18-yard explosive run against Tennessee on Saturday night.

As for Jones, it’s been two difficult preseason games in a row for the rookie. After rushing for nine yards and a touchdown on eight carries in Miami and rushing for just four yards on two carries in Tennessee, Jones’ NFL start has been frustrating for him and the team.

Right now, there is a huge gap between Barber and Jones when it comes to playing time. In fact, veteran Jacquizz Rodgers, who led Tampa Bay in rushing in 2016, is the second-string running back ahead of Jones on the depth chart for a reason. Jones has totaled 11 yards on 12 carries and a touchdown in the preseason and has to be more productive in the final two preseason games in order to gain ground on Barber for the starting job or even earn more carries once the regular season rolls around.

So let’s get this straight. The first and second round pick can’t get into the starting lineup? Licht is on thin ice and so is Koetter. This team better win. They both should be gone if this does not have a winning record.

Presently right now the only running back we have that we can count on is Barber.
At best Jones has several games before he can start helping and Rodgers is at the end of his career. What I don’t understand is why we didn’t pick up a veteran running back this offseason. If Barber gets an injury we’re in deep trouble in the running game. I’m not sure if I would play him anymore in preseason. Any Thoughts?

Yes Barber is the man. He’s a great humanistic story as his family was so impoverished he had to leave Auburn early to support them and wasn’t drafted. I’m rooting for him.

I was surprised we didn’t sign Anderson when Denver released him. He ended up with Carolina.

I think Jones will surprise. It might take a few more games, but it will happen. And Vea? He will be a monster once he is back playing. Regardless, if the three defensive backs end up starting or contributing in a big way, It is still a very good draft. Maybe not good enough to save this Management if they can’t improve in the win column this year.

So let me get this straight. A guy gets two carries and that’s the sample size on which some are ready to judge him? Another gets an injury and he’s no good either. Gee whiz fellow Bucs fans, can we at least wait until the Preseason concludes before Jason Licht’s Draft is evaluated? Perhaps then you could call the 2018 Draft, “Dolly Parton” for it’s two huge busts.

I just don’t get why they don’t put Rojo with the 1st team just to see what he could bring to the table. Our back up OL is garbage and I’m pretty they gonna get Winston injured before even being suspended!
Barber has been the real surprise (with Carlton and Stewart). Great draft class so far, I just really want to see how Whitehead/Cichy and Watson can perfom and see if they end up being very good rotational players or even starters !

Veta came into camp in poor shape they tried to hurry him into shape and now he is in boot for at least 2 more weeks,
Once boot off it going to take time to bring him in shape they need to find a good back up for Mccoy .
If he gets injured they are in huge trouble.

You know they have about 4 different backups for McCoy right? Mitch Unrein, Beau Allen who we signed and William Gholston, JPP, and Vinny Curry can rush from the DT position. It’s not like last year where we were paper think. Where were you this off season?

You must be the Bucs trainer Bob? Nobody said Vea is out of shape but you know this because he got his calf injured? Your a total ass hat and a moron.

As far as Jones until he is given time with first string offense none of what he does means shit. How do you make yards when the line is opening no holes. Magic or something? Lol.