Behind Enemy Lines: Darnold Introduced, Fields In Play For Falcons? Behind Enemy Lines: Darnold Introduced, Fields In Play For Falcons?

• Atlanta has the No. 4 overall pick in this month’s NFL Draft – at least for now – and is still deciding what direction it will head. New general manager Terry Fontenot wants to explore quarterbacks while head coach Arthur Smith thinks Matt Ryan is fine for now and even next season or beyond. Despite some internal conflict initially, reports this week say the two have reached common ground on what they’d like to do with their first-round pick. And according to reports they will be attending Justin Field’s second pro day, maybe giving a clue the direction they are heading.

Source: The Falcons will join the Patriots and 49ers tomorrow at Ohio State QB Justin Fields’ second pro day. Atlanta plans to have the full allotment of three staffers in Columbus.

“That’s critical because that’s a position that regardless of where you are at your starter — we’re so excited about Matt Ryan, but we have to evaluate every one of these quarterbacks,” Fontenot said. “Not just for now, when you think big picture, if you have an opportunity — for example Trevor Lawrence, when you have an opportunity to see that player in person throw, then you have to take advantage of that. Even if you’re not going to have the opportunity at him this year, you don’t know what’s going to happen three, four, five years from now in the future. So you want to take advantage of that in-person exposure.”

• Former Browns, Bears and Falcons wide receiver Taylor Gabriel is calling it quits after seven seasons. Gabriel announced on his Twitter account he had decided to hang it up and thanked his fans. The former undrafted free agent sat out last season due to COVID concerns.

• The Falcons are adding another tight end to the team, announcing on Tuesday that they’ve signed Ryan Becker. Becker spent training camp with the Cardinals prior to being cut.

• Count ESPN’s Mel Kiper as one who thinks the Falcons draft a QB in first round, just not with the fourth overall pick. “So new general manager Terry Fontenot and coach Arthur Smith move down two spots, add extra assets for a rebuilding team and still get a franchise quarterback,” Kiper said. “The 20-year-old Lance is green — he started just 17 games in college, all against FCS competition. The Falcons can let him sit behind Matt Ryan for at least a season. And here’s a list Lance will join (courtesy of ESPN Stats & Information): Since the 2006 draft, six quarterbacks with fewer than 20 college starts have been taken in the first round: Mitchell Trubisky (13), Cam Newton (14), Dwayne Haskins (14), Mark Sanchez (16), Kyler Murray (17) and Ryan Tannehill (19). There is some risk involved in picking a young, unproven quarterback this high.”

The Panthers traded for former Jets quarterback Sam Darnold last week but that doesn’t mean a quarterback pick isn’t on the table later this month.

“We’ll look at anything and everything,” Rhule said to ESPN.com. “We recognize maybe there are positions we’d like to address in the draft, either via draft-day trades, post-draft trades or in the draft. I do think with the eighth pick you take the best available player. Now, if two guys are close, you take the guy that fits your need as well.” 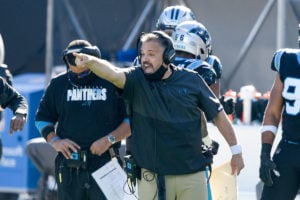 •  Darnold was introduced to the Carolina media and its fans on Monday in a press conference. He said he has not spoken to 2020 starter Teddy Bridgewater yet.

• Another big signing by the Panthers over the past week addressed a need in the secondary.

When the #Panthers signed former Pro Bowl CB AJ Bouye, they gave him a 2-year deal worth $7M, source said.

Bouye, a former Pro Bowler with the Jaguars, recorded six interceptions and 18 passes breakups in 2017.

• Jameis Winston and Taysom Hill will battle to succeed Drew Brees under center this fall. Or at least that is what most people expect. However head coach Sean Payton reportedly was “kicking the tires” on Sam Darnold prior to Carolina trading for the former No. 3 overall draft pick last week, Mike Lombardi revealed recently on a podcast.

As the great Tony Soprano once said "You got options. Don't let anyone ever make you feel like you don't have options."

• The Saints are rebuilding their roster after a number of offseason moves got the team under the salary cap. But the roster isn’t the only thing in New Orleans getting rebuilt. The SuperDome is getting a major facelift ahead of the building hosting the Super Bowl in 2025. However the renovation is going to take longer than expected after losing $75 million in revenue in 2020 due to canceled events last year because of COVID.

• Former King of Queens star, Kevin James, will portray Payton in a new Netflix film. Peter King reported that the movie is based on Payton serving as an assistant on his son’s sixth-grade team. The film will take place while Payton was suspended by the NFL in 2012 due to the “Bountygate” scandal.

Falcons would have to trade back 3-4-5 spots with Detroit, Carolina or Denver. Dolphins are at 6 and they aren’t moving again.

Tough spot to be in for Atlanta. They are committed to Ryan for 2 more years due his massive dead cap hit aren’t they? If that wasn’t the case, I would take Fields if he is there. I think I take Pitts or trade down.

Yet again, I hope they all crash and burn and collapse under the weight of their own failures!!!

The message to Atlanta fans if they go for a QB ” We have no chance to make the playoffs we’re looking to 2-5 years from now.” Atlanta should take Pitts. Hope they don’t.