Behind Enemy Lines: Panthers Looking To Go All In For A QB?

Home » Articles » Behind Enemy Lines: Panthers Looking To Go All In For A QB? Behind Enemy Lines: Panthers Looking To Go All In For A QB?

Home » Articles » Behind Enemy Lines: Panthers Looking To Go All In For A QB?

Terry Fontenot was asked how he will be able to improve the roster when there aren’t a ton of guys under contract and a tight cap: “Everything is in consideration. We’re going to have to make some hard decisions on this roster.”

Already the Falcons have started the purge to get under the cap, releasing safety Ricardo Allen and defensive end Allen Bailey last week. Allen started 76 games for the Falcons over his career and recorded 340 tackles, 11 interceptions and one sack. He was also the team’s nominee for the Walter Payton Man of the Year award in 2019 and was a four-time captain for the Falcons. The move clears $6.25 million in 2021, but leaves $2.1 million in dead money.

• The Panthers appear to be getting ready to make a push to trade for Texans QB Deshaun Watson, who wants out of Houston.

ESPN’s Field Yates reported that the Panthers have cleared a few million dollars with a recent move. It should be noted that, if Carolina were to trade for Watson, he actually carries a fairly small cap hit for the 2021 season, around $10 million. So they don’t need to do anything more to create room for his contract this offseason.

Paradis is heading into his third season with the Panthers and has started every game in his first two seasons in Carolina.

• It appears new owner David Tepper wants a new quarterback, as the team did all it could to trade for Matthew Stafford before losing out to the Rams. If the Texans decide to trade Watson, look for Carolina to be a major player, and if all else fails they could take one with their No. 1 pick (No. 8 overall) in April’s NFL Draft.  Justin Fields could be a potential pick according to some recent mock drafts including ones from Ryan Wilson, Pete Prisco and Chris Trapasso of CBS Sports, who has the former Ohio State standout heading to Charlotte.

• The Panthers have brought back offensive tackle Trent Scott on a one-year deal, the team announced this week. Scott was scheduled to become a restricted free agent next month. Carolina claimed him off waivers after the Chargers released him last September and he appeared in 14 games for the Panthers last season, starting four at left tackle.

• The Drew Brees watch in New Orleans continues, but a decision is expected soon

Teammate Alvin Kamara was on SIRIUS XM radio recently and talked about his quarterback’s future. 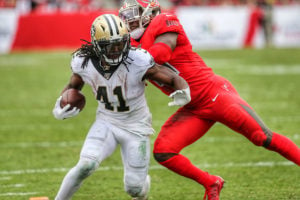 “As far as his career goes and retiring or playing still, a lot of people ask me that and I just say, ‘Drew’s going to take his time and make the best decision for him.’ He’s a legend,” Kamara said. “He’s definitely going to go down as one of the greatest.”

• Tiger Woods automobile accident on Tuesday sent shockwaves through the sports world. It was later revealed he was actually on his way to meet with with Brees and Chargers quarterback Justin Herbert.

• If Brees does retire as expected, the question becomes who replaces him under center in New Orleans? Jameis Winston is the obvious choice but Winston might have a handful of other teams interested in his services. CBSsports.com’s Jordan Dajani recently wrote an article detailing potential landing spots for Winston if he’s not back in New Orleans.

Despite this speculation, it is hard to see Winston finding another job with his limited 2020 action. His best bet would be to stay in New Orleans on another one-year deal and battle Taysom Hill and any other quarterbacks the Saints might sign for the starting job.

Winston will go for who offers the best $$$’s after the huge pay cut last year. Hill’s salary is the problem.

The last thing anyone needs is Watson on the Panthers. Hopefully that #8 pick isn’t rich enough to get him. That offense would be deadly.

To be the best you got to beat the best. WE ARE THE BEST!

The Falcons are a joke. They blew it against the Patriots in the Super Bowl 4 years ago and they won’t recover until the entire team is turned over. Its a scar that won’t heal. 0-2 in the Super Bowl. Doormat next year. Carolina sucks. That Ruhle is a joke of a coach. The owner Tepper is clown for hiring that guy for 7 years. They will never get Deshaun Watson. That’s another joke. He would never go there. 0-2 is the Super Bowl. Doormat next year. The AINTS suck. They got bitch slapped on their field when it counted.… Read more »

The new Bucs dynasty has already begun. No team in the NFC South is going to be able to compete for quite some time