Behind Enemy Lines: Salary Cap Nightmares; Wilson To The Saints? Behind Enemy Lines: Salary Cap Nightmares; Wilson To The Saints?

• Atlanta’s salary cap situation is far from ideal as the team is currently a little over $15 million over the proposed 2021 cap. Being in such a hole makes free agency a daunting task and new GM Terry Fontenot knows maneuvering around their cap limitations will make free agency tough.

“We’re going to have to find players because you can’t just build your roster with overpaid players in free agency or top draft picks. We have to really dig and find value in free agency,” Fontenot said, reported by the Atlanta Journal-Constitution. “That’s working with the coaches and finding exactly what they need and going and finding the players that they need. That’s throughout the entire draft and that’s in undrafted free agency. So, we have to be scouts and go find good players that can really fit the make-up and profile that we are looking for.” • Despite being in a salary cap quandary the Falcons feel pretty good about having the No. 4 overall pick in this year’s NFL Draft, which gives them a number of options including trading down to acquire more picks.

“There are so many different scenarios,” Fontenot said to TheAthletic.com. “There are going to be some really good players there at No. 4. We can move up, and we can move down and acquire more picks. There’s just a lot of different scenarios to really go through. It’s a prime spot to be in. It’s not somewhere that we want to be in very often with this team, but we are going to take advantage of that and be open to all possibilities.”

• The Falcons have already begun making some cuts including releasing starting safety Ricardo Allen last month to clear some cap space. Allen has reportedly begun looking for a new city to call home.

Allen spent his seven years in the NFL with the Falcons before he and his salary were dumped as part of an expected purge to get Atlanta compliant with the salary cap prior for the start of free agency.

• The Panthers will likely have someone other than Teddy Bridgewater under center in 2021 and the question becomes what does Carolina do with their big free agent signing from last March?

Reportedly Bridgewater is coveted by the 49ers who expect Jimmy Garoppolo to be their starter this year, but due to his injury history San Francisco is looking at a backup that could step in and maintain a quality level of play. 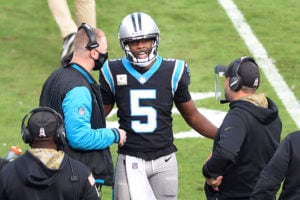 Joe Person of The Athletic says San Francisco has contacted the Panthers about acquiring Bridgewater’s services. A big hangup could be Bridgewater’s $17 million cap hit if traded in 2021. Bridgewater signed a three-year, $63 million deal with Carolina last offseason, but new head coach Matt Rhule wasn’t overly pleased with his first season at the helm and the Panthers are reportedly hot on the trail of Deshaun Watson, if Houston decides to trade their disgruntled quarterback.

• If Watson stays in Houston, look for the Panthers to find their new starter in the upcoming NFL Draft. Several mock drafts have the Panthers taking a quarterback, and the name picking more and more steam is North Dakota State quarterback Trey Lance. You can read the Panthers mock draft report from their team website here.

• Flying a little under the radar was the Panthers hiring of a familiar face to coach their defensive line. Well, familiar face might be overstating it a bit, but Frank Okam, who played for Tampa Bay from 2010-2012, was promoted to defensive line coach and recently talked about his coaching style.

“Some guys get it on the board, some guys get it in film, some guys need to rep it to make sure,” Okam said. “I want to challenge these guys emotionally, psychologically, and physically to help them become the best version of themselves.”

• The buzz continues to grow that the Seahawks might be dealing quarterback Russell Wilson soon. Wilson reportedly said the Saints would be one of four teams he would agree to be traded too. How the Saints could afford Wilson’s big contract is debatable, but with the Saints in cap trouble, a package of high-priced veterans could help ease taking on Wilson’s $19 million cost in 2021, and greater cap hit beyond that.

Someone who seems to be intrude about Wilson joining his team is defensive end Cam Jordan who thinks the addition of Wilson makes them super Bowl favorites.

With our locker room, not a real Question. Of course !!!! https://t.co/uqHNSQ8llU

•  The salary cap merry-go-round in New Orleans continues as the Saints, the most over-the-cap team in the league, attempts to be ready for free agency later this month. The latest move was first reported by Ian Rapoport of NFL Media, revealing the Saints have converted some of David Onyemata’s $7 million base salary to a signing bonus. The move will add to Onyemata’s cap hit in 2022, but opens up $4.34 million in space this year.

• Rapoport also reported the Saints are looking into trade options for Malcom Brown.

The #Saints have had trade conversations about potentially dealing DT Malcom Brown, sources say. In the third year of a 3-year, $15M contract, a trade or release would save NO about $5M against the cap – and obviously they have a lot of work to do to get under the cap.

• Noah Spence, a 2016 second-round pick of the Buccaneers, re-signed with the Saints this week according to reports. Spence who is coming off a torn ACL suffered in offseason workouts in 2020 will make the NFL league minimum, $990,000.

No way the Ain’ts can afford Russell Wilson being that far under the cap (65.5 million). Cam Jordan talking about they would be instant Contenders…haha…how? First you gotta unload those veterans which might include Cam Jordan himself, and then make room for draft picks, being another 8 million…haha They are a joke, would be a total rebuild!!!!!

If the Aint’s figure out how to make it work with Wilson and his contract, even at a lower hit this year, then I don’t understand why there is even a cap of you can slip and slide so much money forward and backwards and inside and out and continue on like that. The Seahawks don’t have a ton of Cap space to swallow Wilson’s dead money and take on a bunch of high priced Aint’s cast offs. Honestly, in a legit world, the Aint’s would need to dump a bunch of guys and rely on the Draft while they… Read more »

Russell Wilson has become a Fat candy ass celebrity. Sitting there with Goodell and his pink haired celebrity wife watching us with the Super Bowl. He couldn’t stand it. So his response was to trash his lineman and coaches. The fact is he’s not good enough to get there again. He gets sacked because he can’t see over the lineman and has to flee the pocket to see receivers. Seattle will not trade him because of the dead cap hit. Even if they did, with our speed on defense we would crush him. A lot like we used to do… Read more »

Maybe the Saints can dump some of their high priced OL and Cam Jordan to make room for Wilson’s salary. Whoops, that puts Wilson back in the same position of running for his life as he was doing in Seattle. At least Jordan will be able to watch Wilson in a Saints uniform. Unfortunately it will only be on the highlight films since he will be languishing in someplace like the Meadowlands. The Saints are already showing signs of desperation. Why else would you keep Spense on board. He’s to slow to be an edge rusher in the 3-4, not… Read more »

Love Wilson as a player; however, Wilson makes it tough to win with his insistence on the huge contract. The Chiefs will run into this problem going forward with Mahomes at $45 mil a season. With the cap set to reduce in 2022… It will be an extreme challenge. For the Saints to sign Wilson, their locker room wouldn’t look the same.

Why even interview Cam “Scam” Jordan? 🤡.. simply delusional..Wilson isnt Brady, and it would take him into the second year ,as said by experts, to flourish..By then, it will be a totally different team. LV Champs!