The Bucs have spent much of the 2022 offseason re-signing their own players. But the team did add one key piece to the secondary in free agency. Tampa Bay signed veteran defensive back Logan Ryan, who is entering his 10th season in the NFL.

Logan began his career as a cornerback in New England playing with Tom Brady before moving on to Tennessee in 2017. He’s spent the last two seasons playing safety and in the slot for the New York Giants. But where will Ryan play in Tampa Bay? The Bucs have a vacancy at strong safety, as Jordan Whitehead signed with the New York Jets in free agency. Veterans Antoine Winfield, Jr. and Mike Edwards are slated to start for new Bucs head coach Todd Bowles, who will still call the plays as the team’s defensive coordinator. But Whitehead was a more physical player than either Winfield or Edwards. He often played in the box near the line of scrimmage.

“Jordan’s departure – they gave him a lot of money,” Bowles said. “At the time, we were cash-strapped. Jordan was a great player for us, an even better person. He was like a nephew to me so to speak from that standpoint. I’ll miss him immensely. I understand the business part of it. I wish him all the best up there. He was a big part of our secondary. We have to fill that gap somehow. We’ve played with Mike and Antoine before.”

So where will Ryan play in Tampa Bay? His versatility is a plus, according to Bowles. But it doesn’t sound like he’s an automatic candidate to necessarily replace Whitehead at strong safety. As Pewter Report’s Jon Ledyard recently pointed out, Ryan graded higher in the slot than he did at free safety, according to Pro Football Focus.

Ryan could ultimately be competition for Sean Murphy-Bunting at the slot cornerback position this season. Bowles’ first look at Ryan will be when the Bucs hit the field for OTAs, which begin on May 17. But Tampa Bay’s new head coach has already gotten a sneak peak at Ryan’s football acumen in the film room. 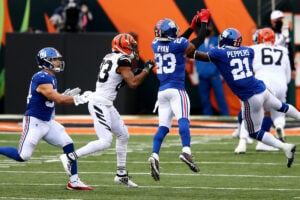 “He came in right away and came upstairs and we talked for a long time,” Bowles said. “We got a good understanding. I do know he’s very bright. He disguises well. He can blitz and he can tackle. I’m excited to see the other things he can bring. He’s a very versatile guy. He played the slot some in that scheme. I want to see what he can do in our scheme and what he can’t do so I can better help him be in a position to succeed.”

Ryan met Bowles a few weeks ago when he was Tampa Bay’s defensive coordinator. Bowles said he doesn’t expect anything to change about their newly formed relationship now that he’s become the Bucs head coach.

“He’s a film junkie,” Bowles said. “He’s a study guy. He understands the game plan and wants to know everything. I’m excited about that. He texted [Wednesday] night when I got the job and said, ‘I’m still coming into your office to watch film.’ I texted him back and said, ‘I expect you to.’”

Sounds like a solid addition! I have faith that Bowles will put him in the right position. I have a feeling he will end up in the slot.. At least initially. We all seen what injuries can make you do to field a secondary.