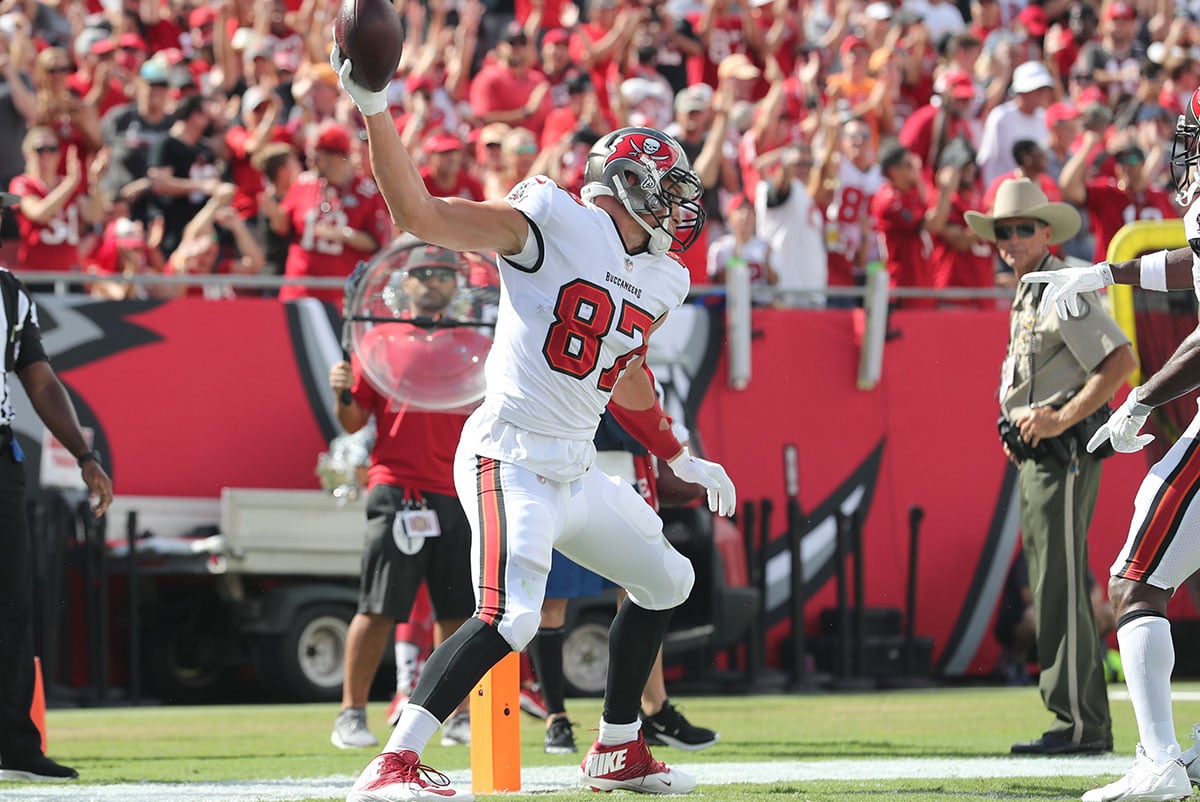 On Tuesday, Bucs tight end Rob Gronkowski announced his retirement from the NFL at age 33. The 11-year pro is following the likes of head coach Bruce Arians and Pro Bowl guard Ali Marpet into retirement following the 2021 season. Jordan Shultz broke the news on Twitter.

An all-time great officially hangs em up at 33 years old.

Gronkowski came to the Bucs in 2020 via a trade, un-retiring after sitting out the 2019 season. His arrival in Tampa Bay followed nine elite seasons in New England. He made an immediate impact in his first campaign with the Bucs, playing in all 16 games en route to a Super Bowl LV championship. Gronkowski caught 45 balls for 623 yards and seven scores in 2020.

In his second season with the club, Gronkowski was limited to just 12 games due to injury. Still, he posted an impressive 55 receptions for 802 yards and six touchdowns. In six playoff contests as a Buc, the future Hall of Famer recorded 17 catches for 226 yards and three scores. Two of those touchdowns came in the Bucs 31-9 Super Bowl victory over the Chiefs. Considered by many the greatest tight end of all-time, Gronk has the stats and records to stand behind that claim. Over his 11-year career, Gronkowski has 621 receptions for 9,826 yards and 92 touchdowns in 142 regular season games. In the playoffs he added another 98 catches for 1,389 yards and 15 scores.

Gronk leaves the game with a handful of accolades and achievements. A four-time Super Bowl champion, he also is a four-time All-Pro and five-time Pro Bowler. He won the 2014 Comeback Player of the Year award and was named to the NFL’s 100th Anniversary All-Time and the 2010’s All-Decade teams.

Gronkowski’s retirement, albeit somewhat expected, leaves the Bucs very thin and young at tight end. Cam Brate, who turns 31, in July, is the lone veteran with experience on the roster. Tampa Bay drafted Cade Otton and Ko Kieft in the fourth- and sixth-rounds in April. The Bucs have three other tight ends on the roster in practice squad player Codey McElroy and J.J. Howland and Ben Beiese.

Bummer, I really wanted him to come back for one more shot at the super bowl but I am forever grateful for him coming to the bucs..now I’m wondering what the bucs will possibly do with the money they were saving for gronk. More lb depth? Another veteran TE?

Well was fun while it lasted. Maybe he will pull a Brady and change his mind. Lol. So we have some money. Could grab another decent LB for depth and veteran TE I think.

Tom Brady wont be to happy

This is sad as a Buc fan, because he was still producing at a high level. But the hits he took were massive! It’s almost as if they were trying to hurt him to take away an important weapon and outlet for Brady. U could tell the hits were beginning to show up physically for Gronk. In the end, the physicality of the game was more than he was willing to risk. For a guy who has been living off endorsements and banking his salary, it just didn’t make sense, health wise, to continue to play. I will miss his… Read more »

PR: So which is it? In literally every article for last month you said ‘we fully expect Gronk to resign before training camp, otherwise he would’ve informed the team.’
Then you say this: ‘Gronkowski’s retirement, albeit somewhat expected…’
You don’t get it both ways. Admit when you’re wrong. And on a related note, make it clear what info you are actually hearing from the team and what you just think will happen.

I agree with you.

What a bizarre take. The writers can’t predict the future. Nor have blurred the lines of PR opinion vs quotes from within the Bucs franchise.

You sound like a child stomping their feet because mommy told you that you MIGHT get ice cream after dinner and then dad said no.

Oh Boy! Different era of football since TE today play more like H-back role and take on more responsibility in the offensive systems than what Kramer was asked to do. Believe what you want but it’ll be hard for anyone to convince me that if Mike Ditka played today that he’ll be a better player than Tony Gonzalez or Rob Gronkowski. Just my opinion!

Can’t blame him, dude broke ribs, and puctured his lung last year. Marpet didn’t want to take the toll anymore, and he’s only 28. It was great having him as a Buc, and I think he’ll always be one in his heart.

Jason Licht’s genius comes through again. He knew all along. He covered himself in the draft and this might be the real reason he did not sign Suh or JPP. He knew he had to save the money for the veteran TE.

Gronk could change his mind. Brady did. Who knows? Either way, thanks to Gronk for helping us win a 2nd Super Bowl.
Go Bucs!

Maybe I’m just in denial but I still don’t buy it. This doesn’t seem like a Gronk move to me, I think if he was leaning toward retirement he would’ve given the team more time. He doesn’t seem like the type to walk away without giving the team a chance to find a replacement in the draft/FA. I’ll continue to hold out hope as I did with TB12 but if this is the end…it was a fun and memorable ride for sure.

My sentiments exactly plopes. I’m sure Gronk has kept Jason Licht informed all along. Certainly, Licht is smart enough to have a plan for maintaining the roster, albeit with limited resources (draft capital and salary) to satisfy every scenario. Wouldn’t be a total shock to have #87 show up at some point, but at his age and without Training Camp, like Richard Sherman, I wouldn’t expect too much.

He was a great TE for us. Great receiver, great blocker and great teammate. I’m not surprised given his actions and words so far this offseason, but I wish him the best in retirement…especially if that means more time to dedicate to the subtleties of acting before putting him in another commercial. Go Bucs!