I couldn’t in good conscious give you a 2022 NFL mock draft, so I decided to give you four prospects I could see the Bucs targeting in the first round of the 2022 NFL Draft. Tampa Bay shouldn’t have many holes on their roster even after free agency next year, but here are four players at four different position groups I could see GM Jason Licht addressing in next year’s draft. 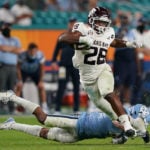 The Bucs have a crowded backfield right now, but by this time next year, questions could abound. Leonard Fournette, Ronald Jones and Giovani Bernard will all be free agents, and Ke’Shawn Vaughn is unproven at best. Odds are good the Bucs re-sign 1-2 of those options, but the term is unlikely to be for very long, and the team could still be in need of a feature back for their offense.

Spiller has two years of excellent production at Texas A&M, carrying the ball over 170 times as a freshman and as a sophomore. What’s most attractive about Spiller as a prospect is his production in the passing game, with 49 receptions for 396 yards over two years. Receiving and pass protection mean as much to Bruce Arians and Jason Licht as rushing ability. If those parts of Spiller’s game take off this season, expect the junior to be a coveted running back in the 2022 NFL Draft.

Mays has been starting for the better part of three years at the college level, spending his freshman and sophomore seasons at Georgia starting 18 of 28 possible games, before transferring to Tennessee. Last season Mays started seven games for the Volunteers, bringing his totals to 25 starts and 32 games over three seasons. What’s unique about Mays is that his playing time has come at literally every spot on the offensive line, including six games at right guard and one at right tackle in 2020.

Mays is a hulking lineman at 6-6, 325, projecting best as a guard or center in the NFL. It remains to be seen what will happen with free-agents-t0-be Ryan Jensen and Alex Cappa, who are both slated to hit the market next offseason. Mays could be the answer at guard or center, depending on how the team feels about Robert Hainsey’s growth as a rookie.

After four years at Alabama, Mathis is finally about to get his chance to be “the guy” on the Crimson Tide defensive line this fall. He’ll be joined by DJ Dale and Labryan Ray, of course, as all three defensive linemen try to prove to the scouting world that they can produce in an expanded role. Mathis has some “wow” moments on tape, but just 5.5 tackles-for-loss and 1.5 sacks in three seasons isn’t going to convince any team to draft him.

The Bucs are looking at massive turnover on their defensive line, including the potential retirements of Ndamukong Suh and Steve McLendon next offseason, as well as the contract expiration of Will Gholston. The team needs to eventually get younger up front, surrounding Vita Vea with quality interior defensive line talent for the golden years of his career.

It’s a huge season for Mathis, who will be an older prospect next fall. He needs to show teams that he can produce as a pass rusher and handle a larger workload. NFL scouts will love fruit from the Alabama tree at defensive tackle, and Mathis has certainly shown out as a run defender, but what he does on passing downs this fall will determine his future in the 2022 NFL Draft. After playing as a true freshman and contributing as a sophomore, there was some speculation that Jobe could declare along with fellow starter Patrick Surtain Jr. this spring after a solid junior campaign. Instead the 6-1, 192-pound cornerback returned to Alabama to improve his interception numbers (one in 39 games, 15 starts) and become the next Crimson Tide cornerback drafted in Round 1.

Jobe has the size and the athleticism teams are looking for at the cornerback position, but more splash plays are needed. If he can improve his technique and physicality this season, Jobe could elevate his draft stock considerably. The senior cornerback could also add some weight to his rail-thin frame.

Teams will already want to buy in due to the experience in Nick Saban’s defense and the physical tools, and we know Jason Licht loves his SEC defensive backs. The Bucs will probably want to keep Carlton Davis around long-term following the final year of his rookie contract, but the future remains unknown for Jamel Dean and Sean Murphy-Bunting at this time.

Oh god please, no more draft nonsense. Do we need to do a draft intervention on the PR staff.

lol this is a yearly thing. It’s customary, right after the draft, to glance ahead at the next class. This won’t be a recurring subject moving forward until it becomes relevant next year, I’m sure. I’m right there with you – I love the draft, and I get more into the whole process than just about anyone else here that isn’t Jon Ledyard and maybe one or two other PR staff members, but by the time the draft actually happens, I’m freakin over it myself. Relevant football is coming soon in June, and then training camp starts in July. Just… Read more »