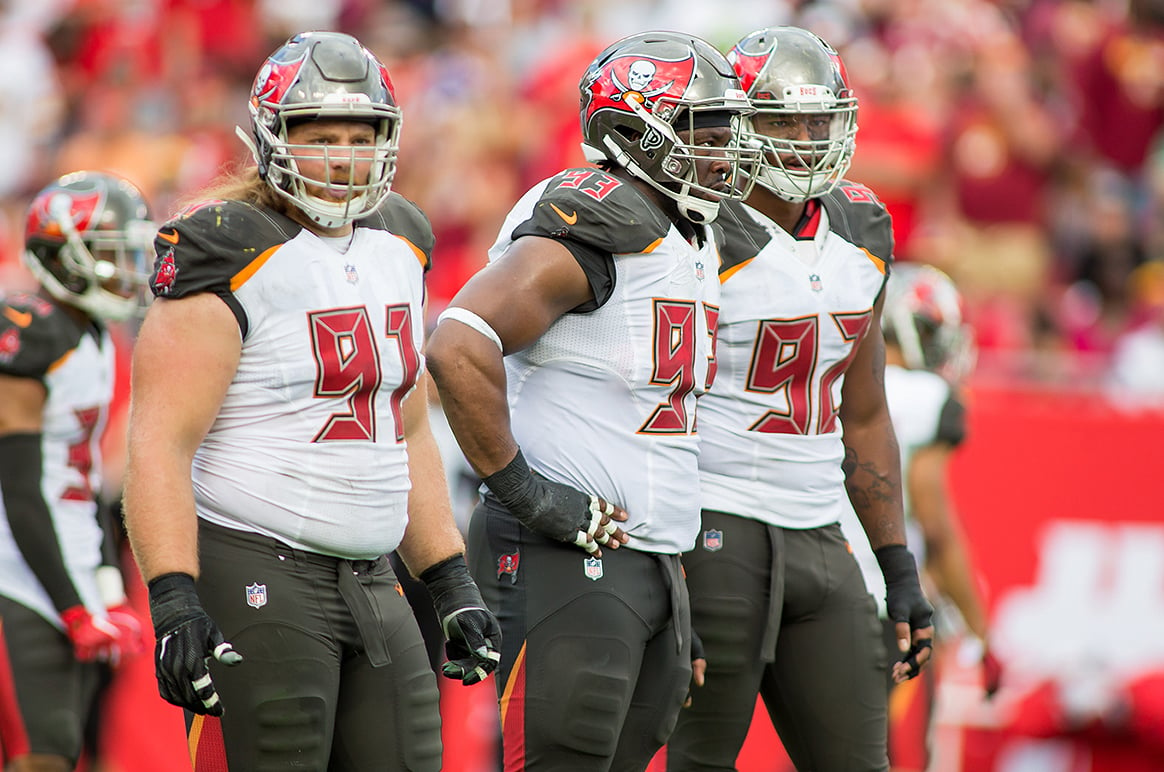 The Buccaneers were able to get some cap relief on Wednesday with defensive tackle Beau Allen agreeing to a pay cut PewterReport.com has confirmed following a report on Thursday morning.

#Bucs DT Beau Allen took a $1 million pay cut, in exchange for new guarantees that solidify his spot on the roster. He's now due $4M in 2019.

Allen, along with former Eagles teammate Vinny Curry, were signed by Tampa prior to the 2018 season with the intent of joining Vita Vea, Gerald McCoy and Jason Pierre-Paul on a revamped defensive line. Curry was released in February saving the team $8 million.

Prior to joining the Buccaneers, Allen was a seventh round draft pick to Philadelphia is 2014. He spent four years with the Eagles, playing in 63 of 64 regular season games on his way to winning the first Super Bowl in the Eagle’s history in 2017.

– Taylor Jenkins contributed to this report

Mark Cook currently is the director of editorial content and Bucs beat writer and has written for PewterReport.com since 2011. Cook has followed the Buccaneers since 1977 when he first began watching football with his Dad and is fond of the 1979 Bucs team that came within 10 points of going to a Super Bowl. His favorite Bucs game is still the 1979 divisional playoff win 24-17 over the Eagles. In his spare time Cook enjoys playing guitar, fishing, the beach and family time.Cook is a native of Pinecrest in Eastern Hillsborough County and has written for numerous publications including the Tampa Tribune, In the Field and Ya'll Magazine. Cook can be reached at [email protected]
Subscribe
Login
Please login to comment
25 Comments
Oldest
Newest
Inline Feedbacks
View all comments

That is interesting development. It seems the coaching staff does like a lot of players already on the roster.

I hope they can restructure with GMC as well.

Anybody know what the Bucs money is looking like after this mentioned above?

So it’s clear now – it was all Koetter’s fault….

Pretty much the same roster in the trenches. From the stands and on television, the trenches are the weakest part of this team. Howl all you want about running backs or poor secondary, with weak lines on both sides of the ball you lose, period.

Glad Allen agreed to the restructure.

I agree Bucsfan1983
Restructure McCoy at 3 years for $27MM with the first two years guaranteed.
I think it is as good as Gerald would get in free agency and it helps the Bucs cap position.

The D line was not bad last year in fact some games they actually were pretty good so not sure why everyone is shocked they are keeping it intact for most part. QBs didn’t have all day to throw like I n last. Differ did he’ll of a better job than Smith. We do need safety and CB help In my humble fan opinion. The O line is another story. The right side needs two different starters IMO that aren’t Benenoch, Cappa, or Dotson. Will see if any of those three can play better. Doubt it. Cappa is only one… Read more »

I hope Allen fits better in the 3-4. He didnt impress me at all last year. Hes slow as dirt off the snap.

I am sure he will only play nose in the 3-4. McCoy(if he stays) and Vea will have more versatility.

This next season is a one year experiment in every way. Licht is on a very short leash. The Bucs have so many questions going into next season, especially the myriad of deposed coaches in key roles. At this point, it doesn’t matter whether McCoy/JPP/David are retained or not. It only matters that they aren’t guaranteed anything past this year.

Buckle up. It’s going to be a rough ride.

Completely Agree. Notice all the new contracts are one year deals!!!!

Gerald is probably still waiting to see as well.

Side note, anybody else unable to reply to a comment? Even when I hit reply it just adds it into the thread instead of replying to a particular comment? Not sure if that was something new or just a system error.

These are the moves were Licht just makes you scratch your head. Michael Kendricks signed a 1 yr 4M deal to stay in Seattle and we are paying the same amount of money for a rotational DL with ZERO push. These small moves are the ones that pigeon hole us heading into the draft, could’ve gotten a starter on defense for this same amount of money but he’s busy pounding his chest trying to prove a point with “his” signing. Same Ole Licht

Kendricks is awaiting sentencing for insider trading. He may not even play next year. Seattle can keep him.

The worse signing for $4m is Breshad Perriman. 16 catches last year for 340 yards. That’s 1 catch per game on average. He supposedly left Cleveland because they traded for OBJ to pair with Landry. Did he not realize Tampa has Mike Evans and Chris Godwin?

The Seahawks resigned him so I’m sure he’s fine and the money is prob not guaranteed but the point is why spend 4M on a player we know will have no impact versus someone that could really help us.

Wouldn’t necessarily compare Godwin to Landry quite yet. Like the speed asset, and he did start to develop late in the season after they made they change at OC.

@stlbucsfan If you were him, would you prefer to resign with a team that you made the playoffs with? A team that took a chance on you even though you were facing jail and a league suspension? Or would you rather go to a team that just turned over its entire coaching staff and has problems at every level? This was a no brainer for Kendricks.

@BiGsombrerO True but I’m not saying we match their offer, offer him 5M with similar terms and take a chance. Players this offseason have shown that loyalty is a factor but money is what gets these deals done. No way he leaves 1M on the table esp given his current issues. Beau made no splash plays on a line that desperately needed it and actually had capable edge rushers. Might’ve been the scheme but I know we need another ILB way more than a serviceable backup DT.

Yep. the one year deals are coming from BA. These aren’t his guys. He wants them to show him.

@stlbucsfan I’m don’t disagree with you that the Bucs need help at Linebacker. I thought Kendricks made some plays in Philly. Unfortunately, dude will be sentenced for 30-37 months on April 4th. Its on his wikipedia page. His signing won’t matter if he’s in the federal pen.

@stlbucsfan I’m don’t disagree with you that the Bucs need help at Linebacker. I thought Kendricks made some plays in Philly. Unfortunately, dude will be sentenced for 30-37 months on April 4th. Its on his wikipedia page. His signing won’t matter if he’s in the federal pen.

I came to the conclusion late (as in better later than never) that the main problem was coaching sometime during mid-season last year. This responsibility of course rests at the head coaches door!

The restructured deal resigning Beau Allen seems smart to me. Now we will see if he can contribute under the new guys.

FLBboy84, I sometimes get random results when I enter replies here at Pewter Report. Being a retired IT guy I am baffled and can give no reason why it might happen.

Obviously it lies some where between their software and the WWW. — See how smart I am! Duh! ;-)

So far I’m okay with what has happened; nobody is perfect in signing free agents, nor the draft. I’m excited BA is going to force the discipline which is first the practice field.

I couldn’t reply directly. I also was having issues because Macafee was detecting a problem with Pewter Report and was making it so I couldn’t see the photos or comment.