Bucs Barber A Top RB In 2017 With Positive Yardage 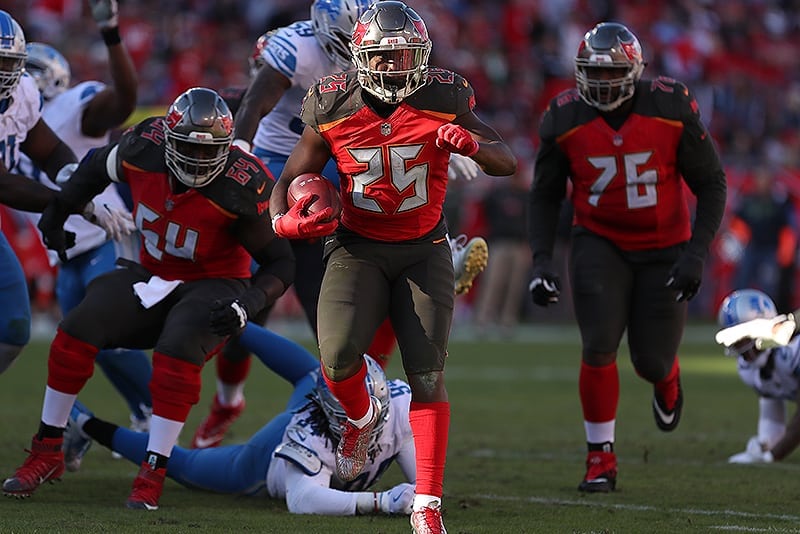 Bucs Barber A Top RB In 2017 With Positive Yardage

There was a time about a week ago when we were talking about the positives of the Bucs’ offseason and their outlook for 2018. That was all before this Jameis Winston mess.

But, just because the Bucs are currently in limbo about Winston’s potential suspension, those positives around the rest of the roster still remain and should still be noted.

One new positive that Pro Football Focus pointed out was that Buccaneers running back Peyton Barber was actually the fourth-best running back in the NFL in 2017 in terms of percentage of runs for no gain or a loss — with a minimum of 100 rushing attempts.

The RBs with the lowest percentage of runs for no gain or a loss in 2017 pic.twitter.com/QsJPDtXwD9

Coaches sometimes say that the best trait a running back can have is his ability to always get you some yards and always fall forward. Last year that was Barber, and it’s something he’ll look to build off of in what will likely be a starting role to open the 2018 regular season.

We definitely need more running back yardage and our offense. Maybe this year we will have some luck with less injuries than the past few years in the running game. Hopefully our number two pick will add to our running back threat. Go Bucs!

So for every 20 carries Barber is stuffed 3 times. Not bad, but he needs to get more yardage. Look at the players ahead of him on the list:

If you look closer at the carries and roles of the New Orleans tandem, you see that they ran the ball with Ingram and Kamara 22 times per game. Ingram got 2/3 of the attempts. Kamara had a higher yards per carry at 6.06 vs Ingram’s 4.89 ypc. Who gets the lion share of carries in Tampa? Do you keep Ronald Jones fresh with 8 or 9 carries per game while Barber gets 15 to 20 carries? Do the Bucs give each player their own series or do you platoon them based on down and distance? If Jones is a… Read more »

Good point about Barber’s stretch of games where he averaged above 4 ypg. I hope Barber stays healthy and does the most with his opportunity this year but I’m also really glad the Bucs drafted RoJo. 2017 – 261 attempts : 1550 yards : 5.9 ypc : 20.9 carries per game : 19 TD’s : 0 fumbles The big stat that jumps out at me from his line last year? Touchdowns. The guy found paydirt 19 times. He also didn’t fumble last year. Not one time. I hope both guys remain healthy and have a great camp. I just wonder… Read more »

I’ll take any positive news that I can get.

I wonder what Charles Sims number is?

Yes He does need to get more yards and will I think but Bucswild02 look at o-lines those teams had and look at ours last year. Enough said.

Nobody
Reply to  fredster

Our Guard play last year in the running game was neck and neck with the Chargers for worst in the league.

When your Guards play that poorly yet you don’t see a high percentage of stuffs, that is solid Running Back play. Sub in Jensen on the interior and efficiencies and gross should increase.

Leveon Bell, John Stewart, Todd Gurley, etc…, all have less than 1/2 yard per attempt more than Peyton Barber right now, and they have good O-lines.

Ot shouldn’t come as a surprise, the kid came from Auburn, he knows how to run the football. And he’ll turn into a very solid RB for us if given the opportunities by the coaching staff.

Barber is one of my favorite Bucs. Can’t wait to see him team up with RoJo. With a bigger, nastier O-line, this could be a great tandem.

Agreed, Dman… and it’s one thing to look at ypc vs. guys who ran behind other O lines, just look what Barber did vs. the “1st string” RB on the Bucs last year

How refreshing to read some actual football stuff.

Barber can be a very good back if given a chance.

Even with the Jameis suspension, we still have the potential to boast a solid run game. With a good rushing attack and a good defense, anything is possible. Lets just hope those both come to fruition.