To begin the 2021 season, the Bucs will face many of the same questions that were posed a year ago at this time. The biggest unknown will again be the play of their young secondary, with Tampa Bay’s six top contributors all still on rookie contracts. While Carlton Davis established himself as a quality starting corner and Jordan Whitehead enjoyed a career-year last season, the jury is still out on most of the Bucs defensive backs.

Nevertheless, defensive coordinator Todd Bowles is pleased with the growth he’s seen from his young group. Mental mistakes crept up last year, and there was a stark lack of instincts in zone coverage at times. Bowles believes his unit is prepared to play with more feel this season, rather than just playing diagram football.

“[The biggest growth is] the maturity in situational football,” Bowles said. “We had a lot of guys last year who just played what I called. This year it’s trying to be more understanding of why I’m calling things and what’s happening in certain situations. So we’re really trying to focus on that.”

Second-year safety Antoine Winfield Jr.’s name wasn’t mentioned in that quote, but it may as well have been. Winfield posted a strong rookie season in Tampa Bay’s defense, rarely getting caught out of position. However, Winfield had opportunities to make plays on the ball in deep zones that he didn’t always take advantage of. Bowles is looking forward to seeing the assignment-sound Winfield take some mature chances as his understanding of the defense improves.

“Just the mental growth of the game,” Bowles said when asked what he wants to see from Winfield this year. “We both know he left some plays on the field last year. He’s doing his job and playing his position, but he can expand on that and he will. He has already some in camp. Just knowing the overall defense and knowing where he can cheat and take advantage of plays, and not just use his athletic ability.”

Winfield agreed whole-heartedly with Bowles assessment, saying how much “faster” he’s been able to play this offseason. Perhaps he’s learned a thing or two from watching an old dog do new tricks in practice. Veteran CB Ross Cockrell, the elder statesman in the defensive back room, has been lights out in his transition to safety. Even the mild-mannered Bowles couldn’t help but applaud what Cockrell has shown in 2 weeks at a brand new position at almost 30 years old.

“He makes a lot of plays,” Bowles said. “Ross is a very bright player. He’s played corner and nickel. He understands safety because he understands what the corner and the nickel are supposed to be doing. So that gives him a leg up there. We’ll still be interested to see [how he does] with live tackling and everything else. But he has a great understanding of the game. He’s very versatile and he’s a good piece to use.” Cockrell intercepted three passes during Monday’s practice session, and broke up two others. He’s continued to make plays on the ball during Tuesday and Thursday’s practices, showing range and instincts as a deep safety. It remains to be seen if Cockrell’s lack of size is an issue in certain situations, but all he’s done is impress during camp.

“Ross is one of the hardest workers I’ve seen,” Winfield said. “For him to pick it up just like that and come out here and practice? It’s been amazing. I’m there watching him and I’m like ‘man, he’s making plays!’ I don’t know how he’s doing it. Ross is a heck of a player, I was just surprised how fast he picked up everything on the back end.”

Cockrell has been a stabilizing presence for the Bucs secondary since arriving in Tampa Bay, especially when younger players have floundered. One of those players has been third-year corner Jamel Dean, at times. Dean went through a rough stretch through the final two-thirds of the season last year, biting on double moves and giving up lots of big plays downfield. But Bowles specifically pointed out his growth in that area, as Dean becomes a more cerebral player.

“Just Dean seeing the 3-step,” Bowles said. “Understanding the 3-step, I think a year ago, he couldn’t acknowledge that. So we had to do a couple different things not to put him in that situation. This year in that situation he’s seeing it like a true corner from a growth standpoint. That’s shown a great step, but he’s gotta keep working.” 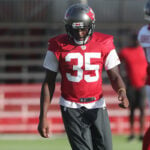 If Dean can be more disciplined against 3-step routes this season, it’ll expose him to fewer double moves. The corner has excelled when he’s able to keep receivers in front of him, but his technique and eye discipline at the top of vertical routes must improve this year. If it doesn’t, Cockrell is waiting in the wings to contribute.

The Bucs secondary might be young, but they aren’t very short on experience anymore. Davis and Whitehead are three-year starters, Murphy-Bunting and Dean have been starting for the majority of their two NFL seasons and Winfield played 97 percent of the team’s defensive snaps last year. Tampa Bay’s defensive backfield has been christened by fire, and they’ve proven equal to every test so far.

“They’re playing with a lot more confidence, that’s for sure,” Bowles said. “We’re working on the understanding of each guy’s individual position and what pertains to them. The awareness is there, we just have to make sure we keep grinding at it. They aren’t going to get it in a week or two. So we’ve gotta keep working at it.”