Bucs Briefing: What Is The Bucs’ Future At Defensive Tackle?

Home » Articles » Bucs Briefing: What Is The Bucs’ Future At Defensive Tackle? 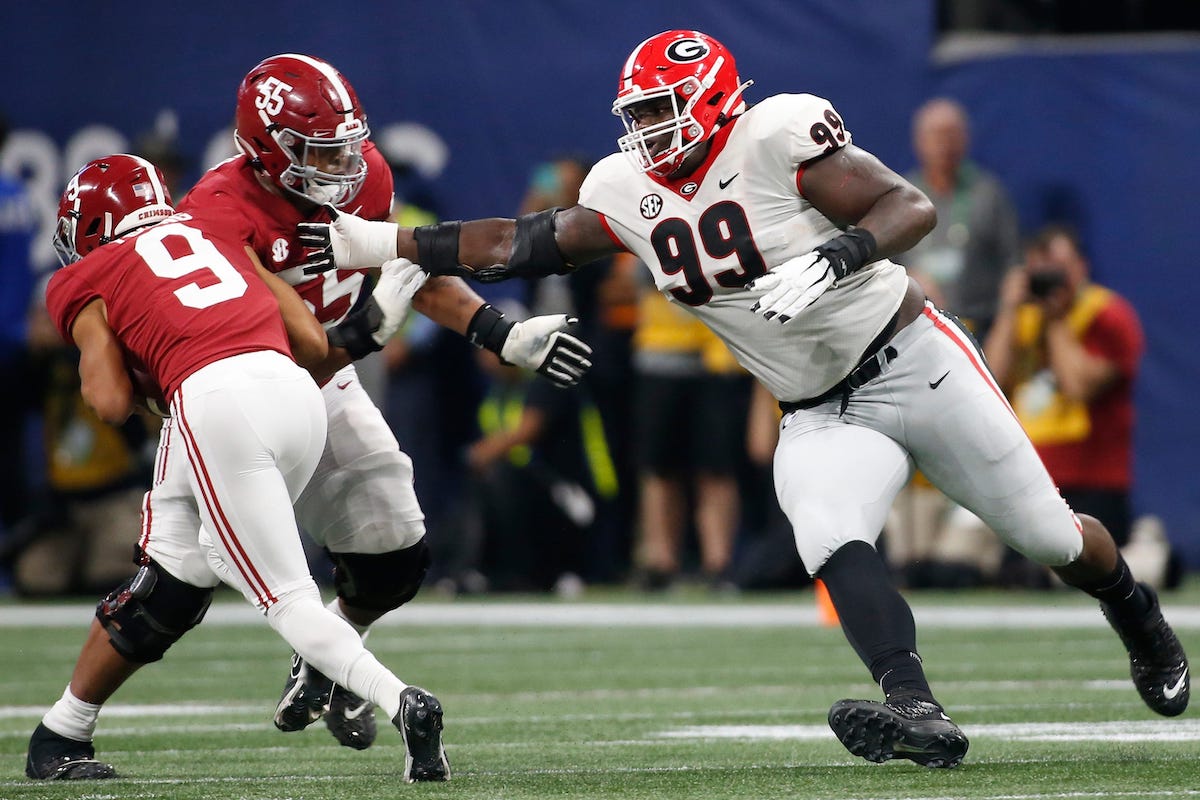 Bucs Briefing: What Is The Bucs’ Future At Defensive Tackle?

Home » Articles » Bucs Briefing: What Is The Bucs’ Future At Defensive Tackle?

Welcome to the offseason edition of Bucs Briefing! My weekly column will appear each Wednesday morning, typically detailing key observations about the team’s offseason. We’ll look at tape, scheme, free agency, draft prospects and major storylines as we get ready for an offseason full of intrigue.

Ndamukong Suh, Steve McLendon and Will Gholston are all free agents for the Bucs this offseason. That leaves Vita Vea and Rakeem Nunez-Roches as the only rostered players under contract. Special teamer and rotational defensive tackle Pat O’Connor is also a free agent. Benning Potoa’e, Willington Previlon and Kobe Smith were on the practice squad last year, but there is no reason to think they’ll earn a promotion next season.

Gholston and O’Connor, who is coming off a torn ACL, will likely be back. Still, the Bucs will be looking for 1-2 defensive tackles that can play this offseason. They’d love to get younger at the position too, without sacrificing talent.

Because my goal is to get younger if I’m the Bucs, I’m ruling out players like Calais Campbell, Linval Joseph, Brandon Williams and Akiem Hicks. All are age 32 or older. Instead, I’ll focus on two young, rising, but still under-the-radar talents in B.J. Hill and D.J. Jones. Scott Reynolds and I mentioned these two on a recent episode of the Pewter Report Podcast.

For four years, Hill (6-3, 303) has been a consistently strong rotational run defender and pass rusher for the Giants and Bengals. Cincinnati would undoubtedly love to re-sign him, but they’ve recently invested a lot of money in Trey Hendrickson and D.J. Reader. Hill should have a strong market in free agency, although I’m not sure how strong. He’s coming off a 5.5-sack season, his best yet as a pass rusher per Pro Football Focus.

Hill hasn’t missed a game in his NFL career. He can play all along the defensive line, but spends most of his time at 3-technique. That’s a pretty perfect fit alongside Vita Vea. This would be a fun combination to watch in Tampa Bay for the foreseeable future.

Jones (6-0, 305) has emerged as a stud on San Francisco’s loaded defensive line. The more snaps he’s gotten, the better he’s played. And Jones’ snaps have gone up all five years he’s played in San Francisco. He can play nose tackle, but has been at his best in the B-gaps for the 49ers. Jones is more run defender than pass rusher, but he’s effective enough to play on passing downs as needed.

I prefer Hill, but Jones would be a nice pickup next to Vea as well.

Defensive Tackle Prospects For The Bucs

There’s a lot of talk that Davis will be off the board well before the Bucs pick at No. 27 overall. I’m not buying it. That isn’t to say that Davis couldn’t be drafted earlier than 27. Just that it’s certainly not a lock to happen.

I get the fascination. Davis will enter the NFL as one of the largest human beings in the sport of football. He’s nearly 6-7 and between 340-350 pounds. On tape, Davis is truly immovable. Even when his pad level swells and his hand placement isn’t perfect, offensive linemen just stalemate on his frame.

When it comes to run-stuffing, Davis excels in a phone booth. He can move one gap over with better quickness than you think, catching linemen off guard. Davis wins through gaps and in-between them, displacing blockers with heavy hands and absurd power. You can run away from him successfully because he’s not a great athlete.

Somehow, none of those traits are on display during passing plays. Davis’ effort level can wane, but more than anything it’s clear he has zero rush moves. His bull rush is shockingly ineffective, even considering his poor pad level. Pro Football Focus credited him with eight pressures on the season. That’s eight more than I saw in three games of studying his tape. He only had seven career sacks in four years at Georgia, including just two last season.

The other thing about Davis? He barely plays. In 2019, Davis played 265 snaps. In 2020, the hulking defensive tackle saw the field for just 230 reps. Then, in 2021, Davis needed 15 games to reach 378 snaps. He’s played 873 snaps over 36 games. That’s just over 25 snaps per game. If Davis couldn’t be effective over 25 snaps in college, why should we expect his impact to increase in the NFL, when his reps will nearly double? Is a part-time player worth a first-round pick?

With Wyatt, you never have to worry about effort. The energizer bunny of the Georgia defensive line, Wyatt plays with his hair on fire. He’s physical and aggressive, but can still improve technically in the run and pass game. There is a lot to like in his game, and still a slightly higher ceiling to reach.

I don’t think Wyatt is a great athlete, but he has a good first step and has flashed the ability to work to the edge of blockers. It’s hard to evaluate many of the Georgia defensive linemen’s pass rush ability, since the team runs so many games and blitzes up front. Wyatt has a relentless motor, good size, good athleticism and good strength. He’s a good all-around player without any one defining trait or characteristic outside of hustle.

Devonte Wyatt displays his quickness and dbl hand swipe to win the inside track!

A guy of his size shouldn’t move the way that he does. pic.twitter.com/XUaFWukjK5

In the NFL, that will make Wyatt a strong rotation player at least. With the right defensive line coach, his intensity could become more refined. Right now, he should be an early snap-eater who can hold the line. Down the road, Wyatt could be a strong starter. I see a decently high floor with Wyatt, provided he tests well enough in Indy. But I’d be surprised if he ever reaches a dominant ceiling.

However, a few pass rush moves would go a long way with his other traits. In Mobile, Wyatt flashed some of those moves. Wyatt had a good Senior Bowl week, which should help his draft stock. I was more impressed with him there than any other interior defensive lineman. If Wyatt can build on that, he should be one of the top defensive linemen off the board in the 2022 draft. And he should be a Bucs target at No. 27, too.

I’m still tracking down high quality UConn tape, so I’ll keep this brief. I watched Jones closely at the Senior Bowl, and I’ll do so again at the Combine. At 6-foot-4, 326 pounds with 34-inch arms, Jones is a massive dude. But he carries the weight really well, and moves well despite his size. At Jones’ height, he’ll never be the most leveraged defensive tackle. But I was impressed with how low he comes off the ball on rushing downs.

Jones knocked people around all week in the trenches at the Senior Bowl. While he could have simply bull-rushed and won most of his one-on-ones, I appreciated him attempting to incorporate various moves into his rushes. He’s got a legit snatch and swim move, even if he’ll never be elite at working to the edge of blockers.

I need to study more tape of Jones, but right now I like him more than Jordan Davis. He provides a similar run-stopping ability with much better promise as a pass rusher. Jones could be similar to Giants defensive tackle Dexter Lawrence at the next level. Of course, I might change my mind when I study his tape. But the Senior Bowl has me very excited to watch more of him.

Winfrey was the talk of the Senior Bowl, so I couldn’t wait to get to his tape. Unfortunately, I wasn’t impressed. It’s hard to be a great defensive tackle if you can’t change directions and have subpar hand usage. You have to be able to either avoid blocks or displace them. Winfrey can’t consistently do either one.

I’ll be surprised if Winfrey’s agility drills at the Combine aren’t a bit of a struggle. You can see by his pre-snap stance, with his butt high in the air, how tight his lower half is. And any time he tried to change direction on tape, or turn a tight corner, the results were ugly. There’s no real pass rush plan to his game either, although he plays with frenetic energy.

Winfrey has a silly frame, a 6-foot-3, 303 pounds with long 35 1/2-inch arms! Even though he is a classic snap-jumper, his first step and length are good enough that I’d consider him in the middle rounds. But he’s not ready to play an every down role in the NFL, or even be a major contributor in year one. Someday, Winfrey could combine that first step with top-notch hand usage, and be an effective interior rusher. But I don’t think his stock will soar as high as some are indicating after the Senior Bowl.

Jon, ESPN ran an article that indicated that Chase Winovich might be available from NE for a late round pick. Is he someone that the Bucs could/should target? I know you liked him coming out in the draft and it would seem that he fits your younger/high motor players or do you see him more as a DE prospect and not a DT?

The contract projections for those free agents are a little bit much considering the cap constraints… On the other hand, we have to get some new blood on the DL. Even if we get Gholston signed, I think we’ve got to find a way to get 2 more DL from FA and/or the draft.

I love how they say don’t draft for need, take BPA. So what if the BPA is a wide receiver five years in a row? Bucs need D line help. Gholston is worth bringing back to me. I’d like to see a younger FA replace Suh, but I think somewhere in this draft we need to pick one also. Like first, second round early. I wouldn’t resign JPP either, so D line needs some rebuild.