Bucs Briefing: What Happens At Safety This Offseason?

Home » Articles » Bucs Briefing: What Happens At Safety This Offseason? 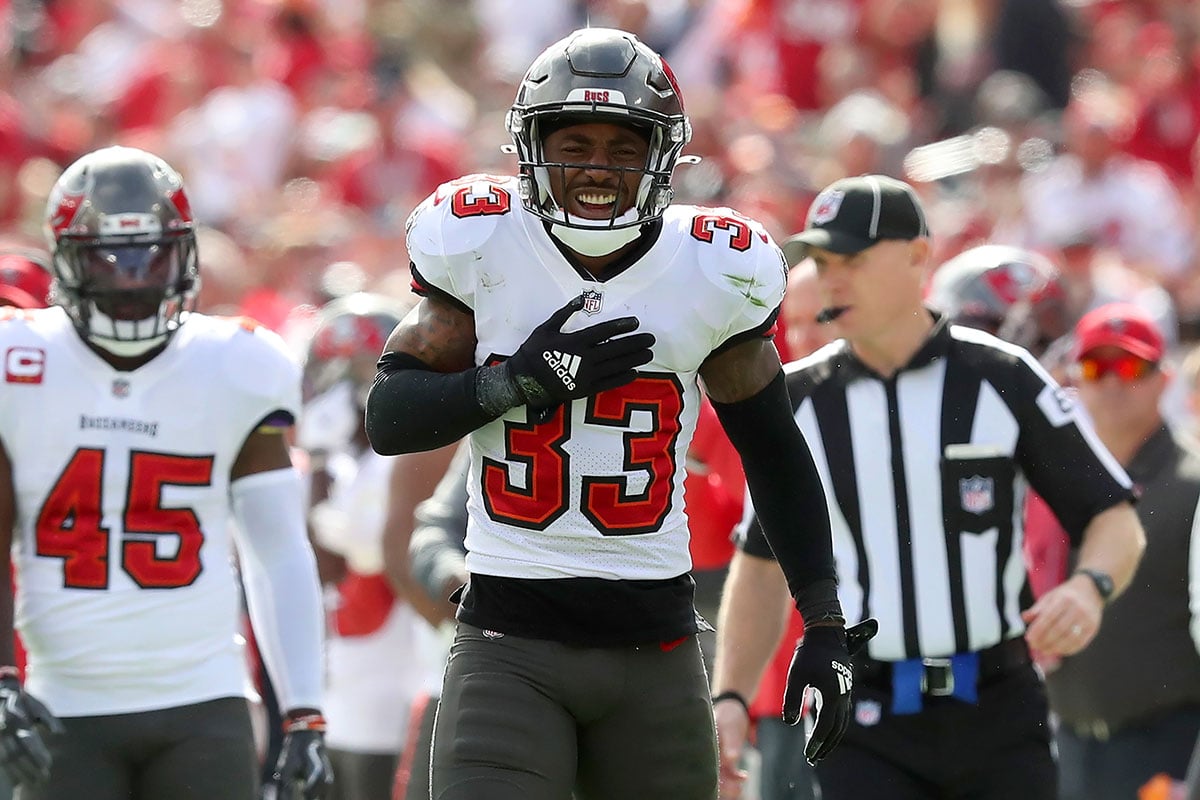 Bucs Briefing: What Happens At Safety This Offseason?

Home » Articles » Bucs Briefing: What Happens At Safety This Offseason?

Welcome to the offseason edition of Bucs Briefing! My weekly column will appear each Wednesday morning, typically detailing key observations about the team’s offseason. We’ll look at tape, scheme, free agency, draft prospects and major storylines as we get ready for an offseason full of intrigue.

This week, we’re looking at the Bucs offseason outlook at safety. Who are their free agents, which ones will likely return and what free agent/draft options at safety make sense for Tampa Bay?

The Bucs have two certainties in their safety room for 2022: Pro Bowler Antoine Winfield, Jr. and Mike Edwards will be back. The only question is if free agents Jordan Whitehead and Andrew Adams will join them. Adams is likely a cheap re-signing and the Bucs clearly value him. He played very well when called upon this past season, and he’s a good special teamer.

Whitehead could definitely be back. He’s currently projected to receive a three-year, $18 million contract per Pro Football Focus. That’s not out of Tampa Bay’s price range, and relatively cheap for a safety. Whitehead is an ascending player, but still below the prototypes that gets paid in free agency at his position. The NFL just hasn’t traditionally seen much value in strong safeties.

However, Whitehead is improving as an all-around player. He’s also not even 25 years old yet, so he could still get paid again in a few years. Right now, Whitehead’s skill set won’t be a great fit for many defensive schemes. But he’s a perfect fit in Tampa Bay, and won’t hamper the team’s ability to make moves down the road either. I think the Bucs should make an effort to bring him back if he’s in the $6-7 million per year range.

The Bucs aren’t going to have much money to spend in free agency – if they bring back their own top free agents. The good news is that it isn’t hard to find solid strong safeties for cheap in free agency. These options might not be Whitehead, but they can help the Bucs fill his void if the veteran moves on. If Whitehead stays, I wouldn’t expect Tampa Bay to make a move in free agency.

If Whitehead leaves, the Bucs will have to decide how to approach the safety room. Do they simply look to replace Whitehead with a similar strong safety? Or do they look for a more versatile player or even a true free safety? That would allow them to be more flexible with Winfield, putting him in the slot or using him in the box more often. Right now, Winfield plays most of his snaps at free safety.

In the draft, there aren’t a lot of free safety options. Especially prospects that could play right away. But in free agency, a loaded group is about to hit the market. However, most will be out of Tampa Bay’s price range. So I’ve listed some versatile/free safety options Tampa Bay could consider, as well as a couple more direct replacements for Whitehead.

If Maye hadn’t gotten hurt this past season, he’d have priced himself out of the Bucs’ range. Now, however, PFF projects his next contract at one-year, $6 million. If that’s all Maye will cost, he’ll be on the Bucs’ radar. After all, Todd Bowles was the head coach when New York drafted him in the second round in 2017.

Maye has been at his best as a free safety, but he’s very capable of playing around the line of scrimmage, too. His versatility would be really helpful to the Bucs if they want to get Winfield closer to the action more often. Maye has fit with just about every safety New York paired him with over the years. And he’d probably like not being the only competent defender in a secondary for a change.

However, Maye tore his Achilles in early November. So his health will be important for the Bucs to monitor in the coming weeks.

Tartt has been a solid, reliable player for years in San Francisco. Like Whitehead, he does the little things well and isn’t a liability, but also hasn’t been a huge playmaker. Whitehead has shown more splash play flashes over the past two years, which is why I would keep him. But if the Bucs won’t do that, Tartt is a good fallback option.

I don’t think the 30-year old would demand more than Whitehead in free agency. But Tartt is versatile enough to allow the Bucs to deploy Winfield more around the box too. He can step into the slot, play deep and defend the run. He’s smart, physical and very active. Tartt fits the Bucs prototype and wouldn’t break the bank.

Other options for the Bucs could include Steelers safety Terrell Edmunds or Giants safety Jabrill Peppers. Both are strong safeties who would mirror Whitehead’s role more directly, but not as well.

Safety Draft Prospects For The Bucs

Brisker is a physical, aggressive safety who falls into the exact mold of a Whitehead. He’s bigger than the Bucs strong safety, but does his best work around the box and in shallow, underneath zones. Brisker isn’t a bad athlete, but I don’t think you’ll see him blow away the NFL Scouting Combine either. There’s enough anticipation and ball skills to play him deep, although he’ll never be an ideal single-high option.

That’s a pretty similar skill set to Whitehead, but at the likely cost of a second-round pick. I do think Whitehead is a little quicker to trigger downhill and find the football. But it’s important to remember it took a couple years for this version of Whitehead to manifest. Most thought he’d be more of a deep safety in the NFL.

Brisker is at the top of the screen on the outside here (No. 1). Great job blowing through the block for the tackle for loss.

Brisker has more natural size to play in the box at the next level. However, his tackling will need to improve. He’s too big to let ball carriers slip through his grasp at the next level. But all the traits are there for Brisker to play through contact and finish around the box. For the way Tampa Bay uses its safeties, he’s an easy fit. He’s also flashed man coverage ability with physicality and length, although he can be a bit contact-heavy in coverage.

Brisker is playing as an overhang defender here, setting the edge on the puller and forcing the ball back inside.

I could definitely see Brisker becoming a bit more scheme versatile than Whitehead over time. However, Whitehead might be the best box safety in the NFL, and he’s growing in zone coverage. I won’t diminish the importance of that combination. If the Bucs won’t spend money on him, Brisker is a good alternative later in the draft.

Good communication pre-snap and execution post snap from Penn State Safety Jaquan Brisker on this out route. A stronger arm QB might get it there, but this is strong route recognition with a good angle & break on the ballpic.twitter.com/9qEJYKvdUO

Cine was one of the hardest hitters in college football. He was at his best in big games for the Bulldogs, playing lights out in the playoffs. He’s probably best known for his huge hit on Kyle Pitts during the 2020 season, but that’s far from his only big shot. Cine plays an aggressive, physical brand of football that will mesh well in the Bucs defense.

Lewis Cine left a ton of bruises during his #UGA career pic.twitter.com/NEEJsSH94O

Cine is a terrific underneath defender who has flashed man coverage ability as well. He can throttle down and break with receivers at the top of the route. That’s rare for a safety prospect. I think he’s a better athlete than Brisker, with better coverage upside.

Some of Cine’s processing reps are outstanding. He does need to lower his target area as a tackler, as he comes in too high at times. Cine can play all over at safety, but might not have the range or ball skills for a single-high role. Despite being a two-year starter, Cine only intercepted two passes at Georgia. But nine of his 14 career pass breakups came last year, as Cine improved his ability to target the ball in coverage.

His ceiling might not be Pro Bowl-level, but Cine’s floor is high. The junior looks like a plug-and-play starter at a potential position of need for the Bucs. However, Tampa Bay might have to draft Cine at the end of Round 1 if they want him. In a thin safety class, it’s highly unlikely he lasts until the 60th pick.

I think he is due a $5-6M contract. He has coverage skills, unlike the LBs.

Just Pay Whitehead! Guy played like a man possessed last few games this year. All over the place and hard hitter.

He was certainly a difference maker and really missed when sidelined with an injury.

Whitehead has earned it. Pay the man.