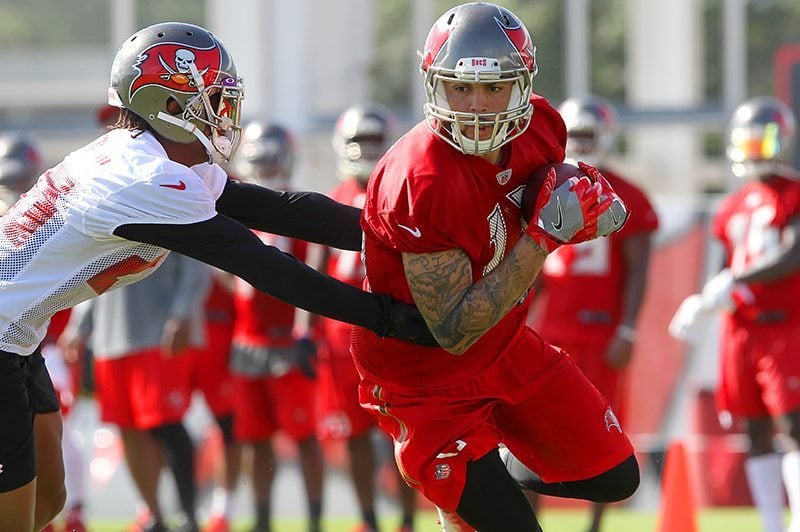 Evans was one of the last Buccaneers to suit up at the end of the 2016 season, earning his first Pro Bowl berth after catching 96 passes for 1,321 yards and 12 touchdowns in 2016, which was the third year he posted a 1,000-yard season since entering the league as Tampa Bay’s first-round pick in 2014. On Friday at the kickoff of the Bucs’ 2017 training camp, Evans picked up where he left off.

The first pass and catch on the first rep of Tampa Bay’s training camp was a pitch and catch from quarterback Jameis Winton to Evans. Whether it was veteran Brent Grimes or second-year cornerback Vernon Hargreaves III,

Evans made a diving catch across the middle that showed off his length, flexibility, his hands and body control – everything you want in a premier wide receiver. Evans was focused all day and didn’t even any concentration lapses or drops.

Evans, who told the media on Thursday that he wants to bring his “A game” to his fourth year in the league, definitely brought his “A game” to Tampa Bay’s opening practice.

“Rookie year, ‘B-‘. ‘C+’ my second year, and last year a ‘B+,'” Evans said. “I’m going to improve, I will improve. I’m feeling stronger and I’m getting older and more mature. The game is slowing down each year. So, I’m just looking to improve to get on that ‘A’ grade.”

Evans, who turns 24 on August 21, was the clear standout on Friday with rookie wide receiver Chris Godwin, who made a couple of spectacular catches himself, a close second.