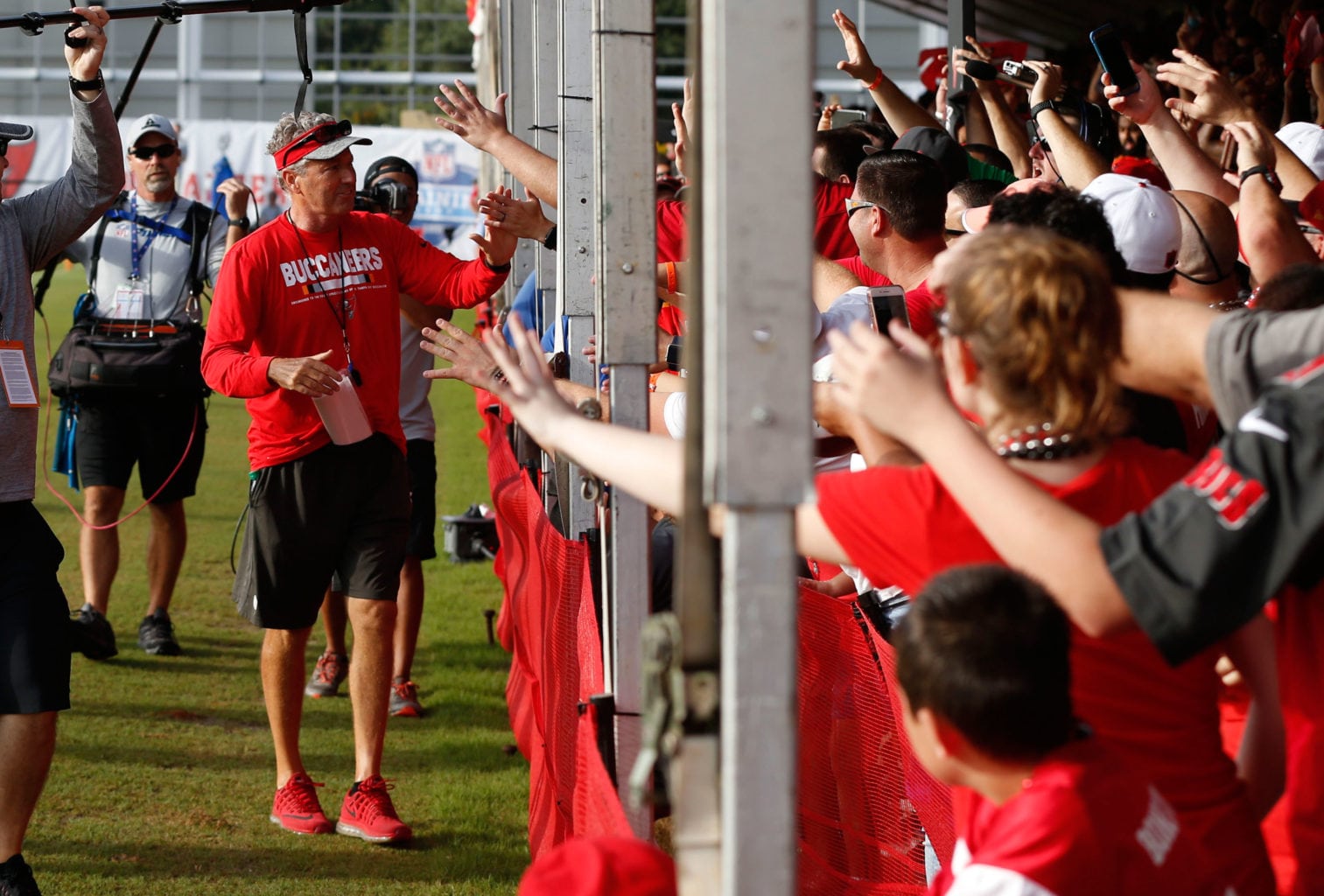 That was the most fun we’ve had at any Bucs practice – ever.

Heck, that was probably one of the most fun times we’ve had at any football event ever.

Last season Bucs head coach, Dirk Koetter, used the phrase, “Speak softly, but carry a big [expletive] stick” as the motto for his team to follow. The meaning behind it was just to be a player that puts your head down and keeps grinding, and eventual knowing they can come out on top. Following the Buccaneers’ Week 13 victory against the Chargers, Koetter, on camera, very enthusiastically recited that motto to his team, and ever since then, the fans have latched on.

Nowadays, there’s a group of fans that call themselves the “Stick Carriers” – though I’m sure they’d like for all Bucs fans to be stick carriers, one way or another. The idea behind it is for it to be like the student section, Bills Mafia, the Dawg Pound, the America Outlaws or the 12th Man of the Buccaneers – something this team has never had as a unified force.

Within the movement, the Stick Carrier fans, several of whom are PewterReport.com readers, circled Saturday’s practice as “Stick Carrier Takeover Day.” Not that members of the fan group wouldn’t go to other training camp practices, too, but they wanted to make sure they could get as many of them together on one day at least once – unity.

Today was that day, and it was unlike anything we’ve ever seen, and it was great to meet several Stick Carriers, too.

The fans showed up at 6:00 a.m. to wait for the parking lot to open just so they could be first in line for when the seating actually opened. From the moment they pulled into One Buc to the last minute they left, they were chanting, hollering and cheering for their Buccaneers.

They players, the coaches and even the general manager loved it, and you could tell there was just an added energy within the practice drills, which resulted in some big plays.

The team worked in the red zone more on Saturday morning than they had in previous practices, which was good to see since it’s a vital part of winning games.

On the first rep of the first team, quarterback Jameis Winston connected with wide receiver DeSean Jackson for six. Jackson is proving day-in and day-out that he’s not just a deep threat receiver. They’re going to use his shiftiness and savvy route running all over the field – and the throw to him in the clip above wasn’t too shabby, either.

Two plays later, let's do it again. This time Jackson tip-toes the back of the end zone. Touchdown again. pic.twitter.com/z9Z4iwiS80

Following the Jackson touchdown, the team ran the ball for a minimal gain. But, after that, they went Jackson way again, and it again was successful.

The play above shows Jackson’s second touchdown. In it, he got the better of cornerback Brent Grimes and tip-toed the back of the end zone for his second score of the drill. Much like we saw yesterday, Jackson is a master of using every inch of free space and separation to his advantage, including some fancy footwork.

DeSean Jackson vs Vernon Hargreaves. Hargreaves didn't bite on the move, but couldn't keep up.

Our final Jackson highlight of the day comes from the play above.

One-on-one drills are incredibly offense-heavy. There’s no help anywhere on the field, and these cornerback are trying to beat a receiver to where the ball is going when they don’t even know where it’s going.

The result of the play, especially against a player like Jackson, is often not pretty for the defender. Jackson got even with Hargreaves, gave him a stutter-step, which Hargreaves didn’t fall too hard for, but even the slightest hesitation was curtains for him.

Jackson showed out in front of the rowdy fans today.

Do you all think Justin Evans is athletic? This is a heavily favored drill for the offense; Evans still got the best of it. pic.twitter.com/FwyJm0Ycna

There were a lot of one-on-one match ups from Saturday’s practice, so we’ll pick a handful of our favorites.

The first is of rookie safety Justin Evans. Being a rookie defensive back in the NFL is hard. There’s so much to learn, books wise, along with simultaneously going up against the best athletes you’ve ever played against in even rep.

Evans showed off his athleticism in the play above, and that’s why the team drafted him. Once he starts getting more confident, we’ll see that speed and break on the ball more consistently.

The rep shown above was just not fair.

How do you expect any defensive back to guard Mike Evans on the goal line with no help. The answer: You can’t.

Evans was not targeted much when the team went through red zone work, which was to our surprise. But, the clip above was a little reminder that whenever they do get a match up they like, they shouldn’t be afraid to go to him.

Keith Tandy 1-on-1 with OJ Howard; gets the best of him here. pic.twitter.com/6yvX2AgEjm

The play above was a tough one to make – one only a veteran can make, really.

Asking a safety to cover a tight end like O.J. Howard from the slot is often admitting defeat. But, Tandy was disciplined in where he stood, anticipated Howard’s route by watching his hips, and was able to break on the ball fast enough, almost too fast. Those are the kinds of veteran moves that earned Tandy the starting safety job last season.

Cornerback Javien Elliott was our Camp MVP on Thursday, and since then, he’s continued to pay at a high level.

Today, he got an interception in 7-on-7 work, and it was a beauty. At no point in the route was Elliott really “beat,” and when the ball was thrown his way, he was able to get his head around for what would’ve likely been a pick-6 in a real game.

Elliott has run away with the starting nickel cornerback job over the last few days.

If Chris Godwin gets this much time, it's six. Nice diving catch in the end zone. pic.twitter.com/ASYXNx3Tg3

It wouldn’t be a Bucs’ training camp practice without a Chris Godwin highlight, would it?

Godwin has been the most consistent player for the Buccaneers during the first week of camp. Not a day goes by that he doesn’t make a good play one way or another, and the players and coaches around him are noticing. He likely won’t crack the staring lineup because it is so talent at the top, but he’ll be plenty involved in the offense, and will be trained to come in at any spot.

The fan spotlight today has to go to the Stick Carriers group. They made it such a fun, rowdy, cheerful environment, and the rest of the fans in attendance started to join them a bit, too. Their presence even forced the Bucs to have an overflow area for standing room only fans all around the field – we haven’t seen that all camp.

The picture above was a very cool moment. There was a fan, Samer Ali, who had a painting of Koetter as “The Godfather,” and after practice was able to give Koetter the picture.

Before that moment, we have the video below, which was when Koetter came over and personally thanked the fans in attendance for making it a practice to remember.

Today was a blast, and we have the Bucs fans to thank – the team thanked them, too.

The plays have a mandatory day off tomorrow before being back on Monday, the day that begins the week of preseason Game 1.

It must of been awesome to be there! Keep up the good work. Go Bucs.

It really was. Hope the fan base only gets more united from here. Tampa’s own 12th Man would be pretty sweet.

Sounds and looks like you guys had a great time. Now if you can only get some inflatable sticks or some kind of symbol to get past TSA security to get into the game with. Sorry I missed all the fun. Looked almost as fun as the final kickoff against the Panthers when the sound system at Ray Jay started blasting “Jump Around” and not only did the fans get into it, but so did the players. Best time I had at Ray Jay in a long time. Winning that game for a sweep of the loathed Panthers and the… Read more »

One more thing, loved the way Koetter got involved with the fans. I can’t remember ever having a coach like that for the Bucs, correct me if I’m wrong. Loved the way he was straightening his tie on his cutout. Good sense of humor.

I hope Coach Koetter said this when he got the painting:

“Never let anyone outside the family know what you’re thinking.”

I love this site, but c’mon, it’s a little cheap that y’all aren’t giving credit to Joebucsfan.com and the Bus Uncensored podcast for creating the atmosphere today at practice. You shouldn’t talk all about how awesome the atmosphere was while pretending you don’t know where it came from. It doesn’t lessen this site’s quality to give credit where credit is due.

Once again, I love this site, but maybe just show some love where love is earned.

I am SO proud of what the #StickCarrier movement is bringing in enthusiasm. It’s about passionate Buccaneer fans who want to make the Ray Jay THE rocking place to be for home games, about the love we have for the Buccaneers. It IS about bringing ALL Buccaneer fans together in SUPPORT of our team. This was a big day, a day in which we showed everyone what it could be like, what it SHOULD be like on Sunday afternoons. Now, I’m an adult. I read and view what I want to read and view. That includes Pewter Report AND JBF.… Read more »

I am SO excited for the season. So much talent on the field, unlike a few years ago.

McCoy is going to be a monster this season as the Bucs finally have some talent around him.

I’ve been to a lot of practices over the past 40+ years, even as an “undocumented observer”, and I must say, this was special. Big crowd and lots of excitement. Fans can sense that the culture has changed. Perhaps we can have an actual home field this season.