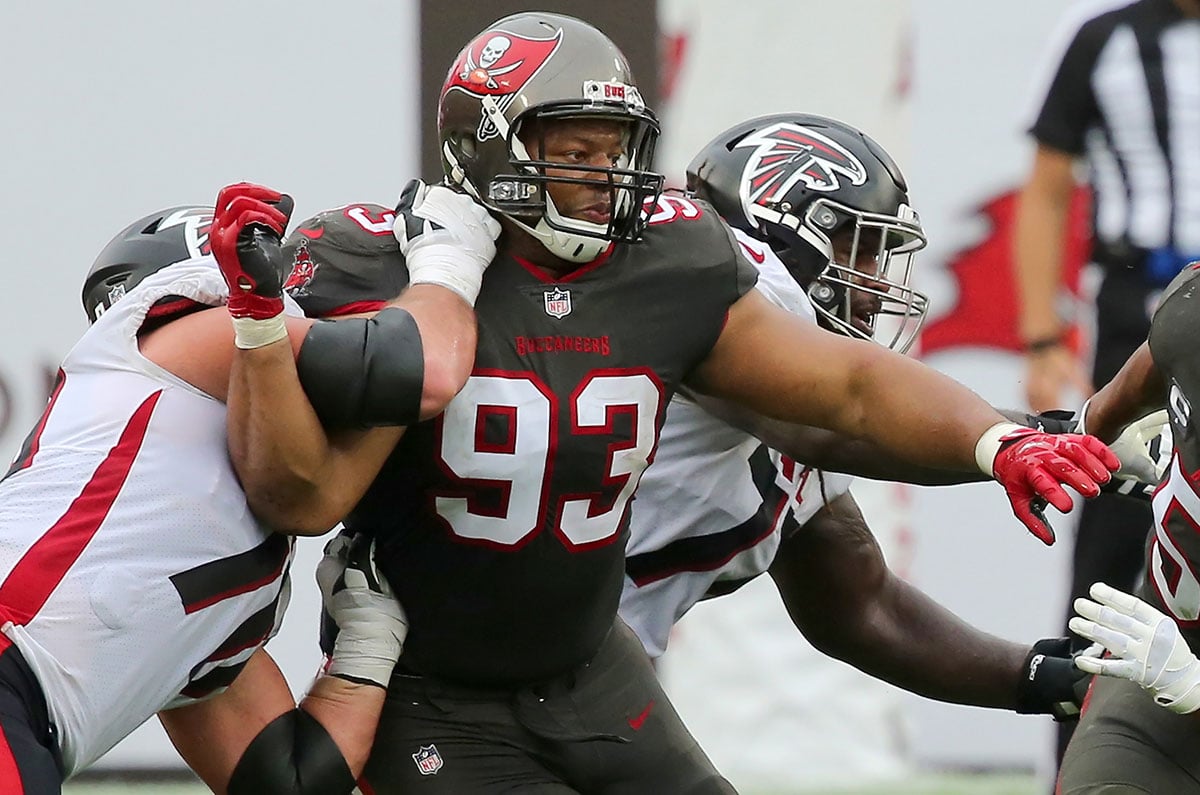 I’ve got a secret. I don’t think anyone has heard it yet, but I’m going to let you in on it. Tom Brady is returning to the Bucs. Oh, you heard already? Well, damn…thought I was breaking my first piece of news. I digress though.

With the return of Brady, the Bucs offseason approach likely changes. While the team doesn’t have any cap room at the moment, they can create a lot of cap room if they want to. How? Mostly through restructures. They have several veteran players with large cap hits that come from, in part, large base salaries. Those base salaries can easily be converted to restructure bonuses that are then prorated over the remainder of the player’s contract.

I won’t bore you with details. But let’s just say by restructuring the contracts of Brady, Mike Evans, Shaq Barrett, Donovan Smith and Lavonte David, the team can open up almost $49 million in cap space. They currently sit about $4 million over the cap at the moment, so these moves could free up $45 million for the team to use for the 2022 season. Throw in an expected Chris Godwin long-term deal that will lower his cap hit and a Cam Brate pay cut, and the team could very well have $55 million to pursue the best team they can put together.

What will that team look like? It would most likely start with keeping key components of their 2020-2021 teams. So let’s look at those players in two groups and see if Tampa Bay can bring everyone back. This is a move the Bucs already showed a willingness to make last year when they re-signed Ndamokung Suh, Lavonte David and Rob Gronkowski. The likely candidates for these deals would be Suh, Gronkowski and perhaps Will Gholston. All three are over 30 and could be in-line for 1-year deals.

Projections for Suh and Gronkowski, per Pro Football Focus, have their deals valued at $5 million and $7 million, respectively. Using three void years for each player could keep their cap hits as low as $2.09 million and $2.59 million. I have Gholston projected for a 1-year, $4.5 million contract. Using the same mechanism, the Bucs could bring him back for as low as $1.97 million against the cap in 2022.

Author’s note: Shortly after drafting the original version of this article, but prior to publishing, the Bucs and Ryan Jensen came to terms on a three-year contract. Tampa Bay used void years to keep the salary cap hit in 2022 low. Due to Jensen being over 30 and the contract using void years, I amended the article to include that information here.

This group is going to be a bit trickier to retain. These players include safety Jordan Whitehead, cornerback Carlton Davis III and guard Alex Cappa. All three are widely expected to be seeking contracts that are three years in length or more. This makes the use of void years more difficult to help with the cap situation this year. That may lead the Bucs to doing something they don’t normally do. Tampa Bay could uncharacteristically push large portions of guaranteed money into the second year of those deals. The Bucs can do use league minimum salaries in year 1 and give the players moderate signing bonuses. But the upside for players is that they receive larger guaranteed salaries and large roster bonuses in year two that are guaranteed at signing of the contract. This would allow the Bucs to conceivably bring back all four players at market rate contracts with low cap hits for 2022. How low you ask? How does $12.5 million total sound?

Now this is an extreme scenario. It’s not too extreme though. And it certainly has to be a strategy the team is considering. Under this premise, the Bucs could bring back all of the above players, filling out seven of the 10 remaining open starting positions from last year. And Tampa Bay would still have somewhere between $27-$31 million left to pursue other free agents.

The Bucs could pursue Leonard Fournette or Jason Pierre-Paul. They could also use that space to pursue outside free agents. Will Tampa Bay be aggressive to fill a gaping WR3 spot? Or will they opt to find the “quick” interior pass rushers that head coach Bruce Arians outlined at the NFL Combine? There are a lot of possibilities for Tampa Bay to be aggressive in improving the roster this offseason.

So what do you say, Bucs fans? Is it worth going “all in” in 2022? How would you spend the available funds under this plan? Who would you try to sign?

The Bucs management team has proven its expertise at cap management, no doubt that will continue.

Expect to see Fournette back, as well as JPP if his off-season shoulder surgery has gone well (haven’t seen anything on that yet in the media). A veteran replacement for Marpet might be in the offing too, unless he reconsiders and un-retires.

Yes! Whatever it takes! It’s the final countdown! Let’s do this. Tomorrow is tomorrow! Let’s win that bit-h this year! Go Bucs!

As long as Brady is our quarterback, we need to do everything we can to 1) keep him happy and untouched in the pocket and 2) bring in as much talent as we can to maximize our chances at another ring. So sell out for the GOAT!

davis and cappa are good at they do but not great. if you can find great than get em, but if not than i say keep them both

If the Bucs were looking at Watson then they had to be up to the idea of giving up 1st and 2nd rounders in some combination. They could get a trade for a great player in one of the key spots. They need to address the left of the defensive line. They need a 3rd solid receiver and imo, need to keep davis and still find someone opposite him to handle 3 receiver sets. Also, what about linebacker? what about the Seahawks Wagner? We need a 3rd and he is a proven player.

Go all in, but maybe don’t bring back JPP this time🙃love the man, but he didn’t look good last year. I think Lenny could be brought back if he plays for cheap. You gotta bring Carlton back though, come on…try for Cappa as well.