Bucs Cut Sweezy’s Pay, But He Can Earn It Back By Staying Healthy

Home » Articles » Bucs Cut Sweezy’s Pay, But He Can Earn It Back By Staying Healthy 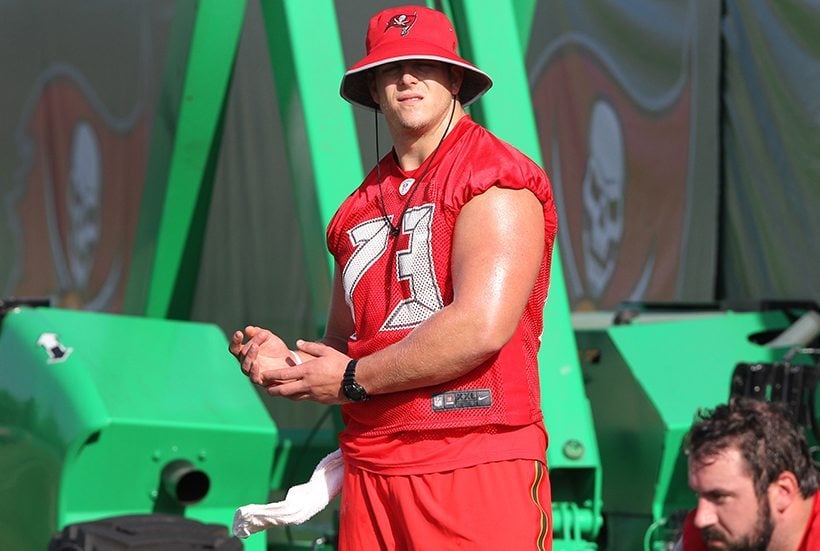 Bucs Cut Sweezy’s Pay, But He Can Earn It Back By Staying Healthy

Home » Articles » Bucs Cut Sweezy’s Pay, But He Can Earn It Back By Staying Healthy

The Buccaneers welcomed guard J.R. Sweezy back to the team with open arms this offseason after back surgery sidelined him for his first year in Tampa Bay after signing a five-year contract worth $32.5 million last offseason. Sweezy suffered a back injury while working out that kept him out of OTAs, training camp, the preseason and the regular season while earning $9.5 million last year on injured reserve.

PewterReport.com first reported that he was medically cleared to participate in offseason workouts in late January. Sweezy passed a training camp-style physical in March prior to having his 2017 salary fully guaranteed.

As ESPN’s Jenna Laine reported on April 8, Sweezy’s deal has been restructured, according to ESPN’s Field Yates. The reason was to protect the team from future back injuries with regards to Sweezy.

The Bucs also added injury waiver language this year, and took away $1.25 million of his salary each year from 2018-2020, but Sweezy can earn that money back if he plays at least 70 percent of the plays each year. If Sweezy injures his back again at any point in time throughout the remainder of his contract the team can release him.

If Sweezy remains healthy throughout training camp he is expected to claim one of the starting guard positions in Tampa Bay this year. The Bucs have discussed right guard Ali Marpet getting time at center during the offseason and in training camp and possibly moving him there full-time for the 2017 season. Left guard Kevin Pamphile will get a chance to compete for that spot again this season, and will also get some snaps at right tackle to compete with Demar Dotson.

Sweezy was Seattle’s starting right guard before coming to Tampa Bay during the 2016 offseason.

LOL, well it’s not as good a deal for Sweezy as the original contract but apparently he realizes he is damaged goods and is willing to restructure things to assure he has a more permanent place on the team.

Nice move by both parties. Hopefully Sweezy can pick up where he left off last time he was healthy. If he can’t, does this make the Bucs rethink their priorities early in the draft?

The another key here, I think, is that it tells Doug that if he is coming back, it will be for a drastically reduced contract with a “prove it” clause to increase his salary.

Im still waiting for an explanation on the back injury. How did Tampas doctors miss it? Did it happen after we signed him? It doesnt make sense that we threw big time money at a guy with a bad back we didnt know about.