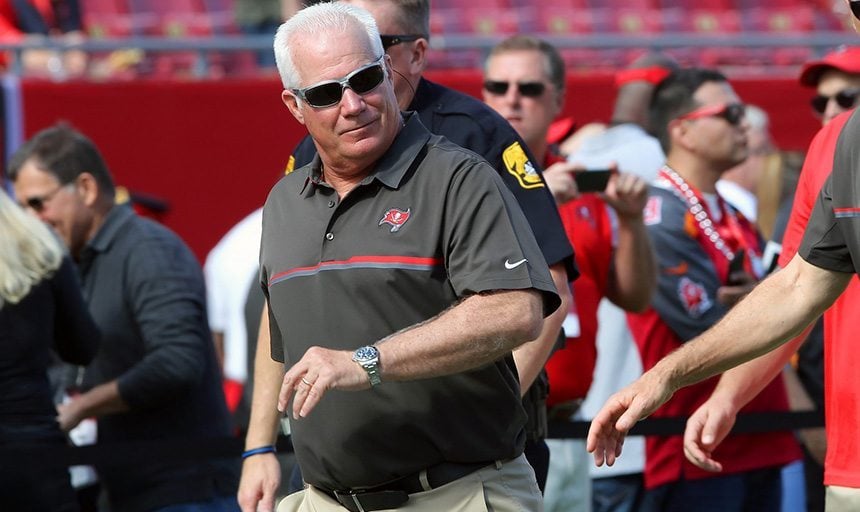 “The names that Jacksonville was going to interview were going across the ticker and it looks like they have a long list. They better get started,” Koetter said. “As far as Smitty goes, look at his record. Look at his record as a head coach. All the guys that are interviewing out there – none of them has his record as a head coach. Every team that is going to interview for head coaches they allegedly have something they are looking for. If Mike Smith is it, then great. Good for him. Mike Smith is a proven head coach in this league and I think the world of him.”

“Obviously when we brought Mike here we knew this day might come and that this day would come,” Koetter said. “If it’s the right fit, and he’s the right guy, and that’s what he wants and that’s what they want there’s nothing I can do about it. That’s how this league works. What I can tell you is that I have a lot of confidence in the staff I put together last year and I got a lot of confidence I have in the staff I’ll put together moving forward.”

The 57-year old Smith, who is a native of Daytona Beach, Fla., has the desire to become a head coach again and the personnel the Jaguars have assembled in defensive back Jalen Ramsey, defensive ends Yannick Ngakoue and Dante Fowler, and linebacker Myles Jack, in addition to free agent defensive tackle Malik Jackson, safety Tashaun Price has to be enticing.

Smith is widely respected around the NFL after becoming Atlanta’s all-time winning head coach from 2008-14 when he amassed a 66-46 record (.589), leading the Falcons to the playoffs in four of his first five seasons. The Falcons posted a franchise-best 13-3 mark twice under Smith’s leadership, first in 2010 before losing to Green Bay in the NFC Divisional Game and again in 2012 before losing to San Francisco in the NFC Championship Game.

What led the Falcons to hire Smith in 2008 was the outstanding job he did as Jacksonville’s defensive coordinator from 2003-07 where he was paired with Koetter, who was the Jaguars offensive coordinator before he became Smith’s play-caller in Atlanta from 2012-14.

When asked if he was planning on beginning interviews for the Bucs defensive coordinator position, anticipating losing Smith to the Jaguars or one of the other five NFL head coaching vacancies around the league.

Should Koetter wish to promote from within, Bucs linebackers coach Mark Duffner might get the most consideration. Duffner has previous defensive coordinator experience in college and with the Cincinnati Bengals from 2001-02, and he has coached with Koetter not only during the 2016 season in Tampa Bay, but also before in Jacksonville.

I’d be O.K. with Duffner for continuity. A perfect replacement for Duffner could be Daryl Smith who should hang it up as a player.

I hope they consider Gus Bradley who is a very good DC. Has experience coaching a zone based scheme and needs a few years to repair his image if he wants to pursue another HC gig which would be great for long term success.

He can’t be that good, look at the talent he had and how it produced under him in Jacksonville. We need to find either a young up and coming guy, or one one of those good established guys who only want to be a D coordinator.

Dude- disagree. There are times a head coach looks bad as HC and then becomes a great coordinator. Think Wade Phillips, Mike Smith and Jim Schwartz

Gus Bradley was DC for the Seahawks in 2009-2012, first under Mora, then the last three years under Pete Carroll. He took his defense to two top ten finishes his last two seasons, including no. 1 overall in points against in his last season. He’s had success as a DC.

I hope they consider him too. Gus is really good and got caught in a bad situation.

I think promoting from within makes a lot of sense. But I also wonder if Smitty might take other defensive coaches with him should he go elsewhere to be a HC. Buccaneers are obviously aware of all the possibilities and will be on top of it I’m sure.

He can’t take anyone still under contract. The only coaches under contract who can be taken against the will of their current employer is a head coach under current rules.

I hear you but Koetter seems to me to be the kind of guy who would let coaches go if they wanted out. He doesn’t stand in the way of any upgrade. Hope you’re right though. May be mute when it comes to Jaguars though. It looks to me that offensive coordinators are more in demand these days, especially with teams with young QB’s like Bortles.

With all of the firings this weekend, we are in prime position to scour the talent and make a great decision both on DC and potential play caller.

Garv; I believe those coaches are under contract with the Bucs. If I am some of these teams looking for the next HC, Iwould ask the question; do I want a Coach who has done okay, but could never get past playoff game and to the SB? I think it thins it out a bit and Tom Conklin is by far the best Coach being interviewed and still has a few years in him. I do believe Smith will figure out that he might get the job of his choice if he waits for another year. Could be also the… Read more »

Losing Smith doesnt bother me because its Koetters philosophy to let the players play on Sunday and stop thinking. Koetter was the catalyst for the big turn around on defense this year, not Mike Smith lol