Running back Rachaad White has become the first rookie of the Bucs’ 2022 draft class to sign his contract. White re-posted an Instagram story from his agent, Blake Baratz, who said that the deal is signed. Rookie contracts, which are handled by Bucs vice president of football administration Mike Greenberg, are four years in length. 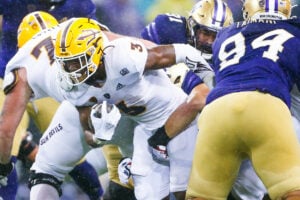 The Bucs took White in large part for what he can do as a receiver in the passing game. General manager Jason Licht described White’s game as a “smooth” runner. White can do it on the ground too, showing great vision in the backfield. He scored 16 touchdowns in his last season with Arizona State with 15 of them running and the other receiving.

Though Leonard Fournette returns as the starting running back, White has a great chance to earn the No. 2 running back role. He’ll compete with Ke’Shawn Vaughn for that opportunity, as veteran Giovani Bernard handles third down. If he can win that, White can make a significant amount of contributions to the Bucs offense. Tampa Bay has been looking for a quality receiving back for the future aside from just Fournette.

First Appearance As A Buc

We’ll get our first glimpse of White and the rest of the new Bucs at the team’s rookie mini-camp on Friday, May 13 and Saturday, May 14. The following three weeks will be OTAs. All rookies are expected be in attendance. Then they rookie will join the veterans at mandatory mini-camp in June.

Great news, not that I expected a holdout ( i don’t miss those days), but it’s a mutual commitment between team and player to officially get to work and get back to the Super Bowl. He has a great chance to make final roster. Go Bucs!

Very good move by White. He want to show that he really want to work to contribute to the success of this team. He don’t want to miss even one second of the season. Excellent sign.