Buccaneers general manager Jason Licht has had his contract extended by one year through the 2019 season. PewterReport.com has confirmed the story was first reported by Ira Kaufman, a columnist at JoeBucsFan.com.

Licht, who was hired by the Glazers and former Bucs head coach Lovie Smith in 2014, had his contract option year for 2018 picked up by the team last year prior to his most recent extension. When Licht fired Smith following the 2015 season after going 8-24 in two years in Tampa Bay, he signed offensive coordinator Dirk Koetter to a five-year deal to take over as head coach. Koetter delivered a 9-7 record in his first season as head coach before a disappointing 5-11 campaign last year in a season full of high expectations. A shoulder injury to starting quarterback Jameis Winston didn’t help, but Licht didn’t give the coaching staff enough horses up front to provide a credible pass rush, as Tampa Bay ranked last in sacks with just 22. 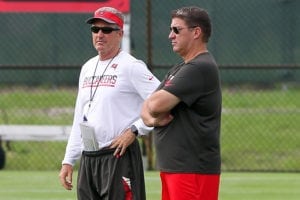 Licht has had more ups than downs in player acquisitions with the drafting of star players like wide receiver Mike Evans, Winston and linebacker Kwon Alexander – all of whom have been to one Pro Bowl – in addition to guard Ali Marpet, tight end O.J. Howard and others. Licht has also added key veterans in free agency, such as cornerback Brent Grimes, punter Bryan Anger, wide receiver DeSean Jackson, center Ryan Jensen and defensive linemen Beau Allen, Vinny Curry and Mitch Unrein, in addition to acquiring defensive end Jason Pierre-Paul in a trade with the New York Giants.

Licht has struggled to find a consistent kicker during his tenure in Tampa Bay going from Connor Barth to Patrick Murray and others that have struggled to make field goals and extra points, including former second-round pick Roberto Aguayo and veteran Nick Folk over the last two years. Cornerback Vernon Hargreaves, the team’s first-round pick in 2016, has also struggled to make an impact and hang on to his starting job.

While many, including PewterReport.com, believe that Licht is coming off an outstanding offseason and has stocked the team with enough talent to win, especially along the defensive line and in the secondary with the drafting of cornerbacks M.J. Stewart and Carlton Davis in the second round, Winston’s three-game suspension will cloud the start of the season. Because Winston was the first overall pick in 2015, his on-field and off-field success over the next two seasons will go a long way in determining Licht’s future in Tampa Bay past 2019.

When I first heard about this I was bummed until I read on and learned it was only a one year extension. I don’t even think this guarantees he will be around after the 2018 season because GMs and coaches generally get fired with time on their contracts. That’s what the Glazers have done with their last few firings. This just aligns his contract with Winston’s and makes their fate along with Koetters even more entwined.

In Licht we Trust!!! He has done a very good job rebuilding this team from where is was when he got to TB. He’s made mistakes but name me a GM that hasn’t.

The team has got the talent & is coming together, Koetter is the one that has to get it done.

As I expected. The Glazers said in the March owners meeting that they were quite happy with the job Licht has done. Everybody knows that Coaches and FO contracts are guaranteed. There was no reason to guarantee his 2019 salary when they could just have easily waited to see how the teamed performed in 2018. It was a clear signal they wanted to send by extending his contract through 2019. Can they still fire him at the end of the season? Of course they can. They’re owners, but the message they’re sending now is positive and looking ahead. Go Bucs!

Scott – there must be more to the story here? A GM does not get a 1-year extension as a show of support in his final contract year. A 1-year extension at this point says “if we make the playoffs, you stay, if we don’t you go”….I guess? And, why is it that every analysis of Licht leaves out half of all his decisions as a GM – nobody ever writes about the guys/picks he cut, passed over in the draft, traded away…2 of the biggest mistakes he made IMO were 1) getting rid of Penn (who went on to… Read more »

So Winston was the right qb pick made by Light ? I’m not sure that decision was well thought out either .

You it sure was and still is the right choice.

meaningless. you think the Glazers won’t fire him after this year and eat his 2019 contract? they will, in a heartbeat. if it were a three or four year extension this would be more meaningful. too bad it wasn’t, I really like Licht. I think he’s learned a lot and dammit, the guy frickin tries hard to put a winning team out there every year. he needs to be ready to walk away from Dirk and/or Jameis if either doesn’t perform next year. that’ll ensure he stays longer IMO. if all three perform, don’t be surprised if you see all… Read more »

@EastEndBoy Can’t hold Penn against him, he was released under Dominic in 2013, Licht came aboard in 2014.

Overall I’m on board with giving Licht another year and I guess positives outweigh negatives. Not by a lot though. Finding a kicker is one of easier things to do and he managed to bungle it for practically two seasons. I hated the Aguayo pick when the team still had so many holes to fill. Was a very foolish gamble of a pick. Even if Aguayo turned out much better than average stil would been stupid move considering state this team was in especially on both lines. The extension is basically Glazers saying we don’t trust you your on the… Read more »

Nitey is correct on Penn. wasn’t Licht. Also if you want to blame someone why this O line went from a strength to weakness last few years it was Lovie Smith. He came in here first year and blew up what was good O line for whatever reason. Needed money to fix defense in his mind best way to do it? Who knows but it has never recovered or got back to normal. Hope we are there this year will find out soon.