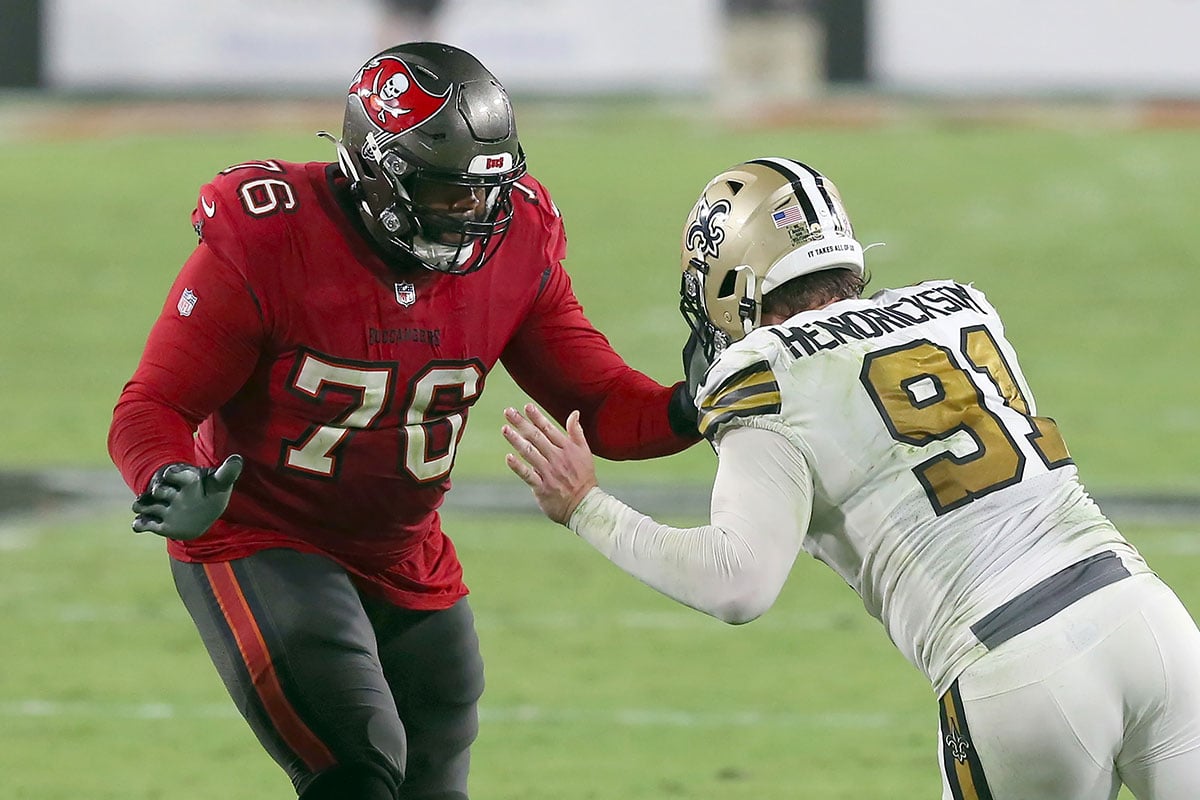 Adam Schefter reported on Wednesday that the Bucs and left tackle Donovan Smith have reportedly reached an agreement on a two-year extension worth $31.8 million with $30 million guaranteed.

Bucs’ and OT Donovan Smith reached agreement on a two-year, $31.8 million contract extension through 2023 that now includes $30 million guaranteed over the next two seasons, per sources.

Smith’s extension will indeed save the Bucs cap space in 2021, with Pewter Report confirming that the veteran left tackle’s cap hit for the 2021 season will land at just $3.6 million. Originally drafted in the second round in 2015, Smith’s play has steadily improved throughout his career, peaking with a career-high 72.1 offensive grade from Pro Football Focus in 2020. Per PFF, Smith allowed six sacks, eight quarterback hits, 21 hurries and 35 total pressures in quarterback Tom Brady’s first year with the Bucs. Smith even improved as the 2020 season progressed, giving up five of his six sacks on the year prior to the Bucs’ Bye Week in Week 13.

While it may not be the long-term deal that Smith will ultimately want as the salary cap rises, along with the market for left tackles in the coming years, the extension puts him at an annual average value of $15.9 million, the sixth-highest AAV for a left tackle contract in the league behind Tennessee’s Taylor Lewan. It also ensures that Tampa Bay will be set at left tackle for the next two years as Brady remains under contract through the 2022 season following the recent extension of his own.

Heading into the final year of a three-year, $41.25 million extension signed in 2021, Smith was due to make $14.25 million as the 13th-highest paid left tackle league-wide.

The contract and money certainly is reasonable considering the position and they type of contracts given out to LT’s. Time for Buc fans to move on to a new whipping boy other than Smith which is common for many ‘Buc fans. The guy had a good season last year. Not great, but good.

He showed up when it mattered most. Smith played the best football of his career in the playoffs. If we’re calling Fournette “Playoff Lenny”, we certainly should be calling Smith “Playoff Donny”.

Last edited 1 year ago by NaplesFan2.0

Right there with you Dr.D and ELM. As I often say, Donovan Smith might not be Paul Gruber, but he’s no Charles McRae either. Many Bucs fans go more on perception, some PFF statistic or the common oft-repeated refrain, than actually watching the game. Folks lose me when they want to rid the team of a good player and then hope to find something better. To me it’s like divorcing your decent wife and then scanning Tinder for her replacement. Looks like we have a few converted Patriots fans now. Not sure what happened to the Big Sombrero who was… Read more »

Understand your sentiment, but Smith doesn’t automatically get a pass after 8 games of improved play, when they were preceded by 5 1/2 seasons of overall poor performances. LONG way to go to make up for just showing up and collecting a check his first 5 years in the league, now he’s got 3 seasons to prove otherwise.

the big number here is only 3.6 mil against this years cap. i think that cleared 10 mill or so and allowed them top sign Suh. So they need to work out someone elses contract to sign AB , fournette a QB and the draft picks. That might take another 10 million i would think

It’s great to see the Bucs methodically working their way through all these veteran contracts, freeing up enough cap space to then do deals with the next increment. Very professional and reassuring not only to the fans but to the players.

I like it because it’s not so long that he can feel like he can just kick back and collect. He’s gonna want to get even better so at the end of the two years he can get another contract from us or someone else. It at least keeps Brady protected while he’s here. After that maybe they test Wirfs at LT and bring in another RT.

This was the easier choice between D Smith or R Jensen to get our 2021 cap down. Jensen is a better player but Smith is Licht’s guy & that’s just the way it is. The other thing to consider is that Smith is the most durable player in the NFL. He never misses a play and that has to weigh-in when evaluating his contract.

This is a good extension as it opened up cap space for Suh’s return and it gives Bucs draft options now.
Bucs can now draft OL depth, DL depth, pass rushers, DBs or RB.

This might be an unpopular opinion but I am just never a fan of paying average players great money. I think they should have let him play out his contract this year and see what happens afterwards. Smith is currently the 4th best OL in Tampa at best (You could make an argument that Cappa is also better) yet he is the highest paid player. I just feel like his play level above replacement is minimal and he has never even been a top15 Tackle in the league. I would have preferred to see if a Tackle falls to Tampa… Read more »

Finding a stud LT at 32 in this years draft isn’t even possible. I’m sure Brady doesn’t want a rookie protecting his blindside. I don’t consider Smith average, and the Bucs seem to agree. I’d rather use that 32nd pick on an impact player, not a rookie LT when we’re trying to win another S.B..

Other than RB, hard to see any positional player being drafted that immediately competes for starting reps. Maybe at S to compete with Whitehead, but haven’t looked at the talent level coming out at that spot yet. Don’t share your outlook on Smith and don’t think the FO necessarily does either. There’s a a very good reason he’s only been getting 2-3 year extensions, and it’s not because the FO thinks he’s a top-10 LT. He’s serviceable and durable, that’s it. They see his durability and inconsistency the same as the rest of us, yet they wisely haven’t been willing… Read more »

I wont grill you, but I do disagree with you on a couple points. If the Bucs had waited until next year, and Smith has a similar season or better, he would have ended up costing top 5 LT money. I think it represents a “meeting in the middle” of both player and team. And while you are correct that he has never been a top 15 tackle during the season, he absolutely was a top 5 tackle, during the playoff run. Players get paid for performing well when the stakes are the highest.

I can see being unhappy with the signing but making the comparison of salaries doesn’t hold water. An average LT gets paid more than the best center in the league and guards don’t get much more than centers. A better argument would be he shouldn’t be paid as the 6th best LT in the league.

Of course you are right when pointing out that LTs make more than interior Lineman, but it just irks me that every other Buc who makes 10+mil is pretty much playing at a top 5 level of their position and has played at a Pro Bowl level over the last 2 years and Smith hasn’t and is one of the highest paid players on the team. On offence the 10+mil guys are Jensen, Marpet, Brady, Godwin and Evans, on Defense JPP, Barrett, David. All of them are top of the class and Smith just doesn’t belong in the same conversation… Read more »

Was hoping some of that $$ savings might’ve been used to bring in White, but guess that’s not happening. $2.5M doesn’t seem like a lot to spend on a quality 3rd down RB, but on to the next. Plenty of options still out there.

No kidding dude! So stupid. No idea what they offered White, if anything. But we probably could have had him for next to nothing. Only problem is, there aren’t plenty of options out there. In fact, there’s next to nothing available as far as proven, decently young, above average pass catching backs

This is a good deal for all involved. I know many would disagree but Smith is NOT an average LT. He is above average and is getting paid as a top 10 LT. I think this is fair as our offense requires long developing WR routes in a pass-heavy offense and Smith is being asked to do a lot more than the average LT protecting a future HOF’s blindside against some of the NFL’s top edge rushers weekly. It’s upsetting to see Smith’s body language sometimes and his mistakes have been costly, but I’m glad an extension agreement was reached!… Read more »

Not a huge fan of this signing. I do give Smith tremendous credit for durability as this is an often overlooked quality that is very important to success. That being said, I thought we would move Wirfs to LT next year and look to draft a RT this year or next or worst case pick up a veteran. Oh well, apparently Licht felt otherwise.

Wirfs will be a pro bowl RT for most of the rest of his career, why move him? D ends don’t just play the left side, they move around. Moving Wirfs to LT leaves a giant hole at RT. Our O line had a great playoff run winning the S.B.. If it ain’t broke, don’t screw with it.

Likely not a coincidence that Smith’s and Wirfs’ deals both expire in 2023, though Wirfs does have the 5th year option. We’re not likely to find an OT of Wirfs quality drafting late-1st for the next couple of years while Brady’s in town, but can def see us drafting one in the next year or two to groom at RT as Wirfs replacement as he moves to LT. While DE’s do move around, typically most teams best OT is tasked with protecting the QB’s blind side, which would be the impetus for the move. If Smith’s sudden rise in quality… Read more »

He may not be the best LT in the league, but he’s definitely dependable and above average. It doesn’t hurt that he’s a team player willing to adjust his contract to help the team either

He is the most suspect signing. Until we know the reason why the turn around of his performance after the Washington game, I remain fearful that he could revert back to a human turnstile at anytime.