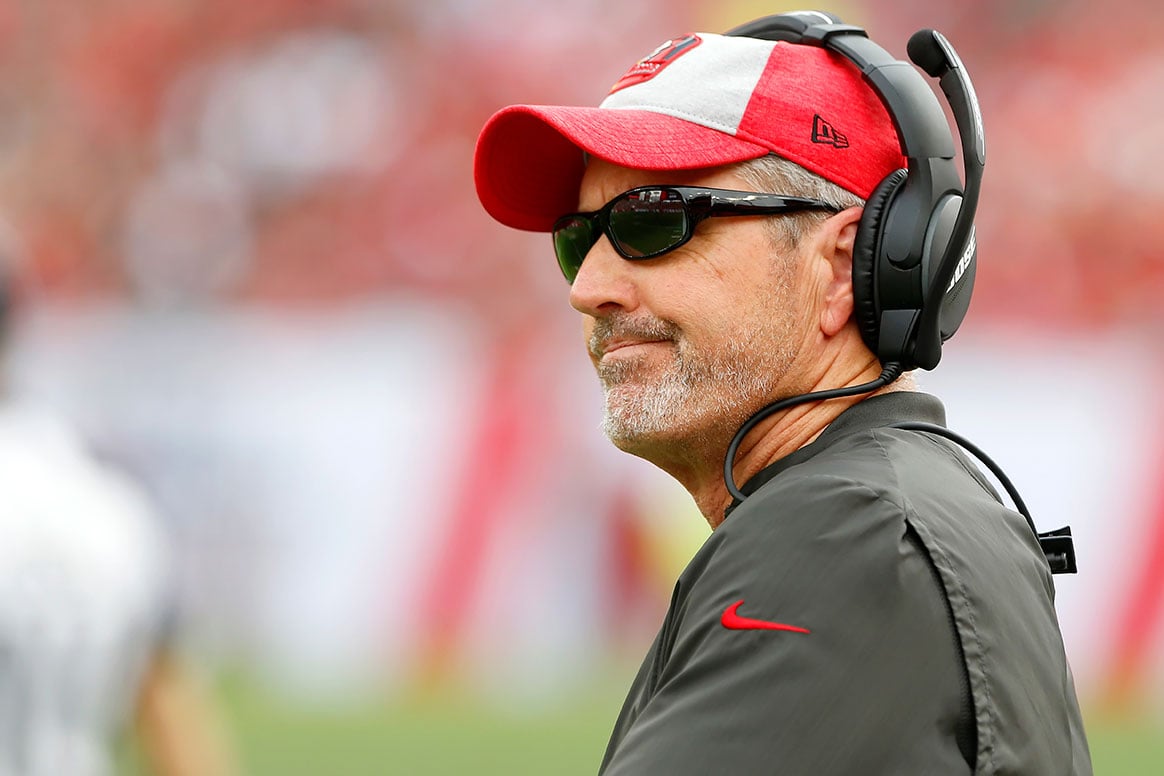 The Bucs have decided to fire head coach Dirk Koetter. The Bucs now former coach lasted three seasons in Tampa Bay, compiling a record of 19-29 with no playoff appearances.

Shortly after the news was made known, the Buccaneers released a statement.

“We sincerely appreciate the hard work and commitment shown by Dirk over the past several years. Working with Dirk has been a pleasure and we wish him and his family all the best in the future. Our search for a new head coach will begin immediately and will be conducted by General Manager Jason Licht.”

Koetter’s first season got off to a good start with a record of 9-7, but that was followed up with two straight double digit loss seasons. There were questions about whether he would keep his job at the end of last season, but a week 17 win against the division winning New Orleans Saints gave Koetter a third year.

His record in close games over his time as head coach may have been part of what cost him his job. The Bucs were 12-16 in games decided by seven points or less, and 5-7 when the game ended by a score of three or less. The Bucs have kept it close, but in the end kept falling short. That’s a trend that’s needed to change, but hasn’t under Koetter.

It wasn’t for a lack of effort on his part, as he made many moves over the calendar year in attempt to save his job and help the team this season. That even meant at the expense of his own ego.

Koetter brought on a new defensive line coach in Brentson Buckner during the offseason, he then fired his good friend and defensive coordinator Mike Smith five weeks into season, and gave the offensive play calling duties over to coordinator Todd Monken. Koetter enjoys calling plays, and has said it was a tough decision that he had to make giving up that power.

With all the choices that Koetter made, he also had some critical one’s that backfired. For example, Koetter decided to take back the play calling from Monken for the Redskins game despite the Bucs being at the top of the league in passing yards and points scored at the time.

They went on to score three points, and the play calling was returned back to Monken a week later without much explanation as to why.

Koetter also had to juggle the act of who start at football’s most important position, quarterback. He didn’t have a choice at first, with Jameis Winston being suspended for the first three games of the season, making longtime veteran Ryan Fitzpatrick as the starter.  Having low expectations, the Bucs started out the season with two straight wins, and that’s when the problems began.

Riding the hot hand, Koetter stuck with Fitzpatrick even when Winston returned, but quickly turned back to him after the bye week. Winston didn’t stay the starter for too long, as he had a meltdown three weeks later with four interception game during week eight against the Cincinnati Bengals.

Koetter’s plan was to get a spark with Fitzpatrick back as the starter, but he too regressed, as the Bucs led the league in turnovers. Even after the Redskins game in which Fitzpatrick turned the ball over three times in the red zone, Koetter stuck with the veteran instead of the quarterback that they had planned on having for the long term future. It was an unexpected call that garnered criticism. But one week later after another Fitzpatrick turnover barrage, this time against the Giants, Koetter finally turned to Winston. He’s been the stater ever since.

He went back and forth between Ryan Fitzpatrick and Jameis Winston, with each being named the starer two separate times. It’s Koetter’s indecisiveness in decisions like this and untimely play calling that may have ultimately done in him as the teams coach. There hasn’t been enough player development under his tutelage added on top of the close losses.

After another year of several close-but-not-close-enough losses from Koetter’s Bucs, we haven’t seen any evidence that it will suddenly change for the better in 2019.The Bucs will be looking for their 12th coach in team history this offseason.

Sad to see him go – after a decade of dumpster fires in “youngry” Rah, Greg “SchiANo-idea what I’m doing”, and Lovie “waaaaaaaay past his prime” Smith, I actually appreciated the honesty, integrity, and humility with which Dirk approached the media/fans, and his offensive mindset surely cannot he questioned – he’ll now go on to be an OC somewhere (a better position fit for him I’m sure he would even admit)….let’s hope it’s not within our division.

Good bye, good luck but most of all good riddance. Lol. I wanted Koetter when they fired Lovie but clearly is a coordinator not a head coach. Go Bucs! Please pick the right head coach now!

He took us as far as he could, now its time to pass the baton.

Wish him the best.

For all his faults, you have to admit that the players played their hearts out for the guy. Best of luck to him in the future but it was time

As hard as I was on koetter, I wish him well.

I do hope we are able to keep a few position coaches.

You can’t coach stupid and unfortunately Licht collected some of the biggest half wits to step on a field.
At one point three Bucs collided with each other in the end zone today. The Ryan TD reception in the endzone was a joke.

According to a large crowd of commenters and voters here at PR, the head coach is responsible for all the boneheaded plays and non-plays that the players make … apparently based upon the theory that players are just brainless automotons who only do exactly what a coach tells them to do, and nothing more, and nothing less.

Apparently that must be the Madden football video game mindset of too many football fans today.

Coaching is important, of course. Players are much more important.

I totally disagree with the firing of coach Koetter. This franchise will never win perpetually starting over. I know there was a lot of optimism starting this season. Especially with Fitz winning the first two. Yet it was that hot start by him that created a controversy the we didn’t need. As the saying goes, if you two QB’s you don’t have any. It caused coach to pause, and there is another old saying that he who hesitates is lost. Defense, I have been an admirer of Mike Smith since he first became the Jags DC. Yet, he failed. He… Read more »

Koetter firing wasn’t unexpected but it is disappointing. I really liked that guy. I think for his first 3 years in Tampa(OC then HC), he built a pretty solid fan base. His offense was the best offense Tampa has ever had. Defense was a different story for the offensive minded straight-shooting head coach, however.
I agree the guy will latch on somewhere as an OC and make someone’s offense a juggernaut.

I disagree with firing Koetter. When the Bucs promoted him to save him he wasn’t ready to be a HC and he is just now growing into the position. I think in the long run he would/is going to be a tremendous coach. Another reason we should have thought twice is that the Bucs are finally piecing together a staff that will take them places. Firing Smith and promoting Dufner was a bold move that began to pay off. I have wonder what could he have accomplished given the chance to incorporate his style, bring in his people, and have… Read more »

I’ve witnessed every one of the coaching changes since John McKay retired. Each time I was thrilled because the shortcomings of the departed were so obvious. Plus most were not well-liked. “Lemon” Bennett was clearly over his head. “Throw Ray in the Bay” Perkins was an absolute jerk. Richard Williamson didn’t have a clue, but was a nice guy. Raheem “Youngry” Morris was too youngry himself. Greg “Toes on the Line” Schiano was a tyrant. Lovie “Simple as That” Smith’s homecoming was a total disappointment. Dirk “Speak Softly but Carry a Big MF Stick” Koetter at least got his team… Read more »

I think Dirk did his best and believe he has a lot to offer the NFL going forward. I think he was sincere about winning and worked hard to repair a feeble offense. Unfortunately things didn’t work out and he was released. I just hope I don’t have to listen to a continuous stream of hate and criticism like we endured about Lovie Smith and Greg Schiano, they to didn’t work out but both had a strong desire to bring a championship to Tampa. Let’s focus on the future. I realize we have to have someone to blame but that… Read more »

I wish they would have kept Koetter. You guys do realize how many games were lost by the KICKER? Thats the one play that is very specific and barring a bad snap is on the kicker. I think we probably lost six games the last two years to that position. They tried to fix it but nothing worked out. A couple of those wins keeps the bucs in the playoff hunt and maybe history changes. I personally have really really enjoyed having a fun offense with no quit. We were in almost every game. Even if the other team ran… Read more »

This writers is promoting a BS theory of coaching. Koetter is blamed for instability in starting quarterbacks … as if Koetter had anything to do with Winston sexually assaulting a woman and getting suspended by the league for three games for having done that … or that Fitz, after playing lights out for two games to start the season in Winston’s forced absence, suddenly reverted to throwing the ball to the other team … and then after switching back to Winston, Winston stunk up the stadium with his own turnover party … then went back to Fitz, who continued to… Read more »