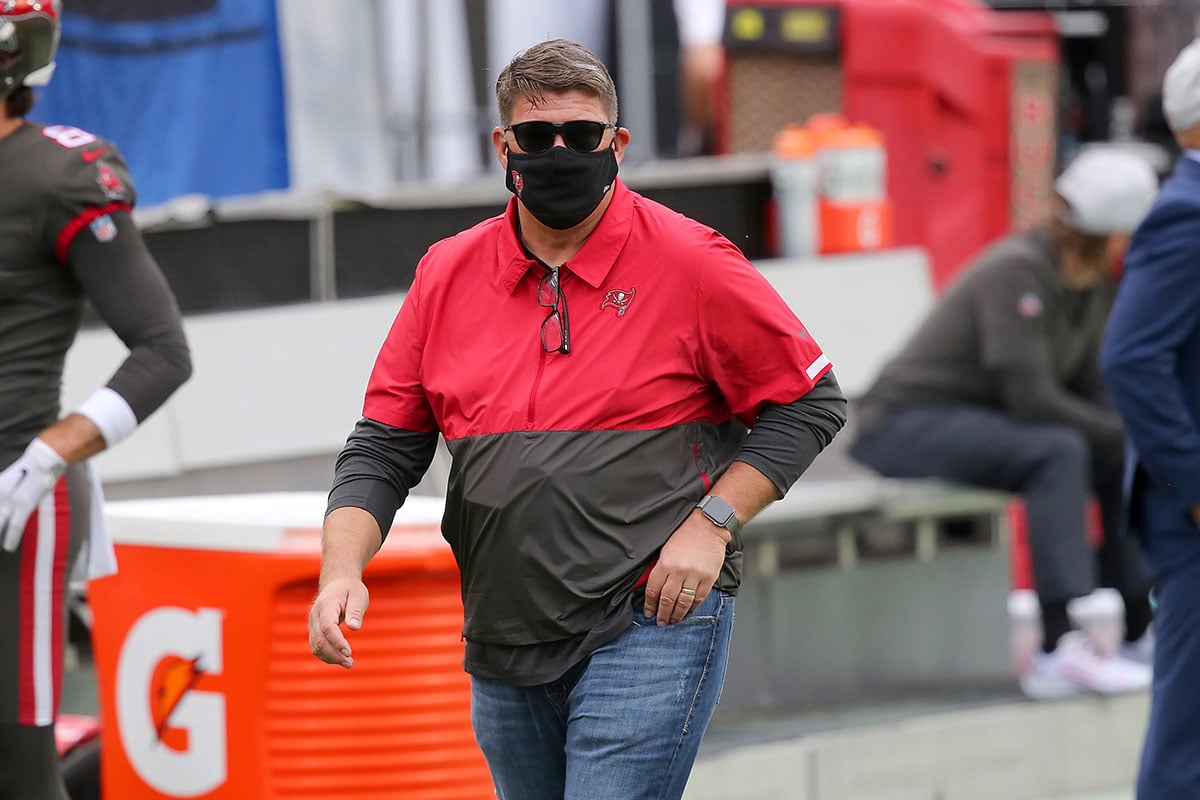 A year or two ago, you probably wouldn’t have found Bucs’ GM Jason Licht high in any rankings of the NFL’s 32 GMs. But as Licht’s draft picks have blossomed and his moves in free agency have proven to be extremely shrewd, respect around the league has grown by leaps and bounds. This past week, NFL.com’s Gregg Rosenthal slotted Licht third in a ranking of the league’s GMs. The rankings were based solely on the drafting success (or lack thereof) of each GM since 2015.

The only GMs to finish ahead of Licht were Colts’ GM Chris Ballard and the Steelers’ GM Kevin Colbert, widely considered two of the best GMs in the game. Still, with a list based solely on drafting since 2015, it is tough to understand how those two could be ahead of Licht.

Ballard had that amazing 2018 draft with OG Quenton Nelson, LB Darius Leonard and OT Braden Smith. But the Colts’ shot caller had four second round picks that year, with two of them flopping so far (EDGE Kemoko Turay and EDGE Tyquan Lewis), and all three of his second round picks in 2019 have been disappointing (CB Rock-Ya Sin, EDGE Ben Banogu, WR Parris Campbell). Ballard’s 2020 draft class showed promise this past season (WR Michael Pittman, RB Jonathan Taylor, S Julian Blackmon, but if you’re comparing four years of drafting to Licht’s six, they better be four incredible years. Really only one of Ballard’s drafts matches that criteria.

As for Colbert, there is no doubt he’s done a stellar job of keeping Pittsburgh relevant despite aging stars, but he can’t hold a candle to what Licht has done in the draft. General mangers are more responsible for franchises’ first round picks than any other selection, and Colbert’s had some underwhelming ones to be sure. EDGE Bud Dupree became a quality starter, but he took years to develop into a competent player after being a first round pick. In 2016 CB Artie Burns was a complete bust despite repeated efforts to make him a regular starter. T.J. Watt in 2017 headlined a terrific class, but since then Terrell Edmunds and Devin Bush have yet to make good on their draft pedigree.

Consider that Licht lost two very promising day two picks to freak career-ending injuries in S Justin Evans and LB Kendall Beckwith, and his hit rate is even more impressive. As much as I appreciate Ballard and Colbert, there is little question in my mind that Licht is the best drafting GM in the NFL over the past six years. His top three ranking here is admirable, but the Bucs exposure on the national stage is still new enough that nobody wants to put Licht on top just yet. That will change soon.

Even if I may squabble with Rosenthal’s rankings, he does tremendous work and is a great follow on Twitter. You can read Rosenthal’s complete ranking right here:

I ranked decision makers based on their drafts since 2015. Alternate title: How the Patriots and Eagles got here https://t.co/14HMnjPAh7 pic.twitter.com/GRBSTvY5zp

Very nice to see Licht getting some well deserved recognition. I think he’s the best GM in the NFL, not only as a drafter.

agree From also ran or worse to SB champs the Brady acquisition will go down as the biggest steal all time by the Bucs not even considering his draft acumen. The shock waves are still being seen throughout the league.

There been so many idiots on here bashing and complaining about him and the Glazers over last few years I’ve posed here. He had a learning curve and made mistakes but always thought he deserved to be here and wanted him here. Some even have questioned if the Glazers want to win which is so asinine. Yeah they want to lose money and have shitty team. Rome wasn’t built in a day and in salary cap era all teams go through down times. Bucs had bad run there but I always trusted would turn around eventually and every year last… Read more »

Some of that criticism was warranted fredster, especially during the time of Raheem Morris.
But after his tenure the Bucs ownership did change tact and made some honest moves to try and improve the team with unfortunate poor results.
Some coaches, Schiano and Koetter, just aren’t NFL caliber coaches. Others, Lovie Smith, are just to rigid to adjust to he way the game is currently played.
As much as the draft is a crap shoot, so is choosing a new NFL head coach. Maybe even more so.

Licht’s drafting improved dramtically after 2016 which can only be summed up as a train wreck four years afterwards.
Even Hargreaves wasn’t as bad of a selection as Noah Spence who was to small to play DE in the NFL and to slow to be an OLB in s 3-4 which the Bucs didn’t even play at the time.

I wouldn’t trade Licht for any other GM out there. He’s the best, IMO.

Vernon Hargreaves and Roberto Aguayo… Those will always cast a shadow… but I’ve always felt he knew what he was doing… Though Aguayo really challenged that belief.

It’s nice to see Licht near the top of the list and difficult to compare the respective records. Licht has had the advantage of picking in the upper half of each round while Pittsburgh is typically picking in the lower half of the rounds. Hopefully Licht can keep up while picking at the end of every round this year.

It’s hard to claim that, where Licht picks in the 1st, has a lot to do with his draft success, seeing as he’s been even better hitting on his 2nd round picks. Just saying

I’ve always liked Jason “Meathead” Licht’s down to earth, regular guy persona. Many GM’s appear a bit aloof with an inflated opinion of themselves. Jason gives me the impression that he actually listens to his staff and believes in their player evaluations instead of them bobbing their heads up and down in agreement with his lesser informed opinions. There’s a reason why the staff remains intact. I suspect it’s because they all feel like they contribute. Perhaps the Pewter Report writers can do a story on those area scouts in the trenches who should be proud of their work behind… Read more »

Something to be said for sticking with a guy you believe in and letting him grow and develop into the job.