Since Tom Brady’s return to the Bucs after a brief retirement, speculation has run rampant about a possible extension. The 44-year old quarterback has just one year remaining on his deal with Tampa Bay. Brady is expected to become a free agent following the 2022 season. At the league meetings in Palm Beach, FL, Bucs GM Jason Licht didn’t comment much on a possible extension.

After being an MVP candidate last year, Brady will play his third season in Tampa Bay this fall. While the odds remain high that the Bucs will want him back for 2023, the Pro Bowler will be 45 in August and just retired two months ago. There’s certainly plenty of reason to be financially prudent when eyeing an extension with Brady. The Bucs would love to avoid being saddled with cap restrictions if Brady retires again next offseason. 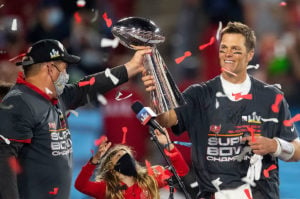 And from Brady’s perspective, the opportunity to choose where to end his career is certainly valuable. If he even wants to play beyond 2022, of course. In Palm Beach, Licht responded to a question about Brady’s thoughts on free agency.

“You’d probably have to ask him,” Licht said when asked if being a free agent would mean something to Brady. “Once again, we’re excited we have him back this year. We’ll see where it goes.”

Pewter Report has previously reported that no extension for Brady is imminent. There’s a lot of logic for both sides in holding off on an extension right now. Expectations are sky-high for the 2022 season. If things go according to plan, the Bucs will have plenty of leverage to entice Brady to return to Tampa Bay next offseason.

This type of situation is how some journalists aggravate my anxiety in their pursuit of clicks. Although most of the claims about why Brady retired have been refuted by the actions he’s taken, they’re enough to make me worry he’s angling to leave like he did to New England. The difference being the Belichek tried to move on from Brady more than once and the Bucs have made every effort to let him know they are committed. Although every party involved in last year’s draft said the right things, could lingering thoughts about Garoppolo being drafted to replace him have… Read more »

There will always be stories about Brady going somewhere else and for a variety of outlandish reasons. First it’s the Niners, his boyhood team (he’s a grown ass man now, I doubt those childish desires still remain) who drafted Trey Lancein the first round last season. Then it was to the Dolpins for part ownership of the team. Simply because last year he bought property in a toney part of Miami. Next it will be New York so he can rub Bill Belicheck’s nose in it twice a year. Good gawd.

Seems if there’s nothing much for the media to discuss, they’ll just make up something to stir the pot. Sadly, folks are so willing to believe anything they’re told. Even here, Bucs fans leaped at the opportunity to use the Brady retired because he didn’t like Bruce redlining a game plan story just to satisfy their own narrative.

I will say, Brady’s preference not to sign an extension is the first actual thing that’s concerned me about him wanting to play here past this season. If he knows that he’s either going to retire or play in Tampa, then he’d 100% want to keep signing extensions, whether he plans to actually play those future seasons or not, in order to minimize cap hits in the current season and maximize his opportunity to win for however long he is here and playing. Him and the team, who I feel very confidently are just following his lead on the subject,… Read more »

I still just don’t see Brady looking to start over yet again and all of the time that takes. I have a feeling he is looking to light things up this year, win the MVP and and Super Bowl at all costs and leave without regret or anger. The Bucs are gonna let him do his thing and enjoy making opponents look like fools and as long as he wants to play and it’s easy, Gisselle won’t mind as much because it leaves more time with the family because the hard parts are on auto pilot here by year 3.… Read more »

I actually don’t think he’s ever been focused on particular overall milestones. And I don’t think the “way” we lost this year, or even that we lost at all, led to him deciding to come back. For years, Brady has told anyone who will listen when he’ll retire. When either (a) he sucks, or (b) he loses his fire for the game. I don’t think (b) is ever happening. He literally loves football itself more than anything else in the world. So as I did before his very brief flirtation with retirement, I think he’s going to play until his… Read more »

I wouldn’t say he actually “addressed” a possible extension. In fact, the headline more appropriately should say “Licht sidestepped questions about a Brady extension.”

Another exercise in, as stated at the beginning of this post, “speculation has run rampant”. This is really tiresome. Everybody knew when Brady signed with the Bucs two years ago that he was not the long term “quarterback of the future” given his age and years in the league and the other options he has to make a living. He said he wanted to play until he’s 45, so there you go. He retired once already, and then unretired, so obviously he is willing to change his mind as he sees his options evolve. Leave it at that. Enjoy Brady’s… Read more »