There has been a lot of talk about how Bucs running back Leonard Fournette has grown since joining the Bucs last season. From head coach Bruce Arians to Fournette himself, we’ve heard players and coaches speak to his budding maturity. As his role in the Bucs offense has expanded, that’s become more apparent. Recently, team reporter Casey Phillips sat down with assistant head coach and run game coordinator Harold Goodwin to get his thoughts.

“To me, just watching Lenny and the way he’s matured over the last year or so,” Goodwin said. “It’s just the attention to detail. You know, in the past, I think he was worried about some things he shouldn’t have been worried about. Because obviously his teammates are really, really talented. For him to be in there as a starter, taking a lead-dog role, he’s been more focused. More locked in. 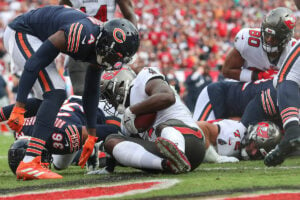 “He’s very outgoing around meetings when it comes to meeting with the O-line and talking and asking questions. So just the maturity of being more locked in from a fundamental standpoint and an Xs and Os standpoint has been great for him.”

Fournette has had a much better start to the season than he did in 2020. In eight games, the big back has 439 rushing yards. He’s also scored four times, while adding 30 receptions for 239 yards. His 30 receptions are good for third most on the team. In addition, Fournette’s 40 first downs are the most by any Bucs player this season.

A stellar postseason performance saw Fournette dubbed  as “Playoff Lenny”. With Ronald Jones struggling, Fournette has taken the load as lead back. If “Locked In Lenny” can continue to produce at a high level in the second half of the season, the Bucs offense will continue to thrive.

You can listen to the tremendous entirety of Bucs Total Access with Casey Phillips right here.

In this case “The Talk” really helped the talented youngster.