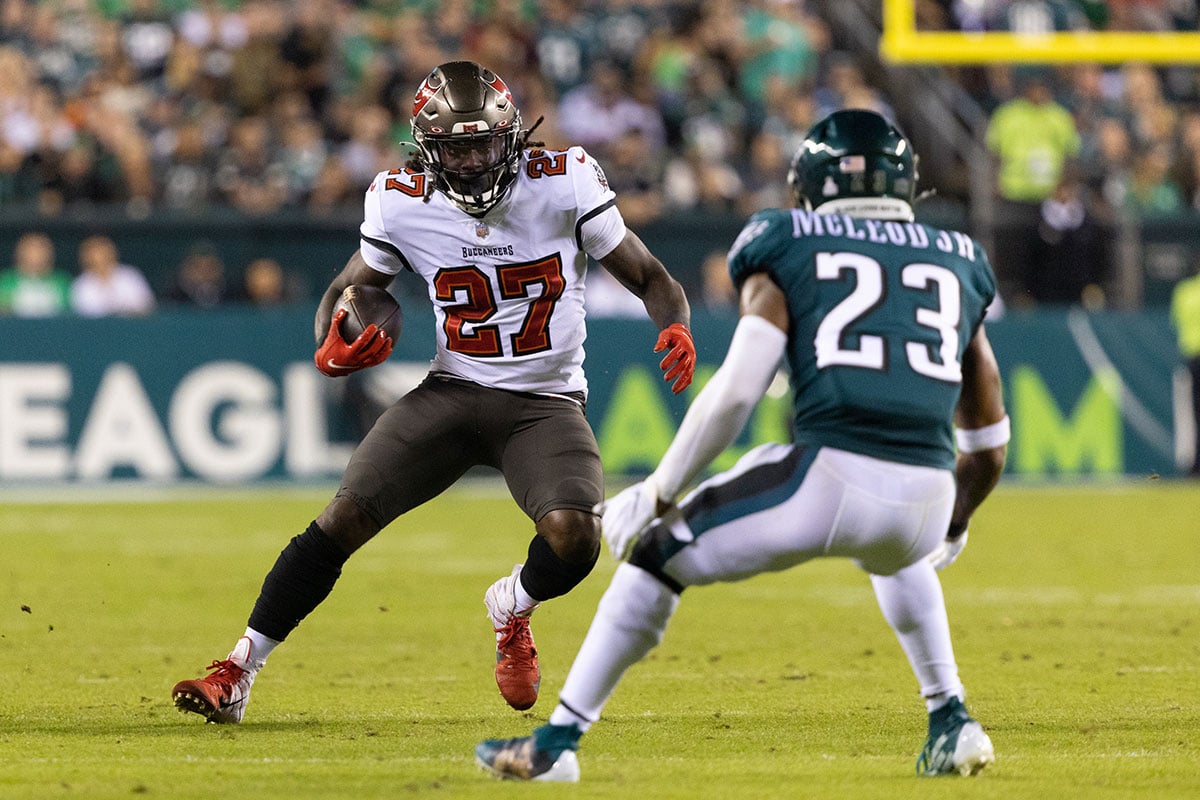 There’s been recent speculation on the part of major media networks that other NFL teams are interested in trading for Bucs RB Ronald Jones. Jones has been relegated to a backup role in Tampa Bay, carrying the ball just 31 times for 118 yards in 2021. But Bucs head coach Bruce Arians squashed any speculation that Jones could be on the move.

“No, not at all,” Arians said, laughing, when asked if the Bucs would look to unload a running back. “It’s a long season. Just look at the scenario that happened last year (with Jones getting hurt/COVID). And still with COVID. You can’t have enough good players.”

Jones is just a season removed from rushing for 978 yards for the Bucs, averaging over five yards per carry. But his struggles in the passing game have carried over from 2020 to 2021. Jones was one of the league’s worst pass-protecting backs last season, and not much has changed this year. He dropped the ball at will last year, and has only five targets in 2021.

Meanwhile, Leonard Fournette has made clear strides as a blocker and receiver, while out-performing Jones as a runner too. On the season, Fournette has 78 carries for 332 yards and three touchdowns. He’s also caught 25 passes for 213 yards. Over the past three weeks, Fournette is third in the NFL in yards from scrimmage. That’s led to Jones playing just 19 percent of the Bucs offensive snaps this season.

On Sunday, the Bucs will face the league’s 16th-ranked run defense in Chicago. Fournette figures to see the bulk of the carries, while Giovani Bernard contributes on passing downs. Jones will wait in the wings for now, ready for his chance if an injury occurs.

He’s gone come next year. I agree keep him for now it is a long season for sure.

Right now teams aren’t probably offering much if anything. But if someone all of a sudden someone offers a one or a two, the Bucs might change their mind. That doesn’t make them liars if that happens. Geeeeeeesh.

And this one does not do it very well

If we did trade anyone it would more likely be for another player. Trading Jones or Howard for a defensive back might make some sense, but I’m not sure who we would replace Jones with. Vaughn is just a guy right now.

Rojo has not been given much of an opportunity this year. He is not as well rounded as Fournette, but as a rusher he’s better than Fournette once he gets a few totes and into a groove. Averaged 5.1 YPC last year and just made tacklers look silly sometimes. It’s a shame he hasn’t developed enough in his catching and blocking.
All that said, if someone offered us a quality starter at another position of need, I’d probably take it, especially since Rojo is probably gone in free agency.

Can’t say much about RoJo’s pass protection since he’s been so seldomly used in that role……….maybe for a reason. Folks criticize his pass catching ability, but it seems to me he has done just fine when called upon this season. What I can say is that RoJo has enough skills as a runner that I’d like to see him more than we have this season. Not saying “Worth Every Penny Lenny” hasn’t been doing well himself, just that I think No-Go RoJo, and for that mater No-Go Gio could be used a bit more to utilize their different skill-sets.

He dug his own hole.

This coaching staff and front office is not trading away valuable depth. They have already had to go deeper in the secondary than they would have liked and I do not see them moving off of any of that depth.

We definitely wouldn’t get a draft pick worth trading for. No team is offering a 2 for what Rojo has shown so far, and in a contact year. We’d get a 6 at best. Keep him for depth, we need that more than a future camp body. Trading for a player I doubt we get much more than a Delaney or Desir-level player.

Agree completely. Not a Rojo fan, but at least he’s decent injury insurance. Let him walk in the offseason and the team will probably get about the same level comp pick as they would get in a trade for him.

Perfect deal would be Ronald Jones for Marlon Mack. Colts run more downhill which is in line with Ronald Jones and Marlon is more of a complete back which would help us stay multi dimensional when we take Lenny off the field.