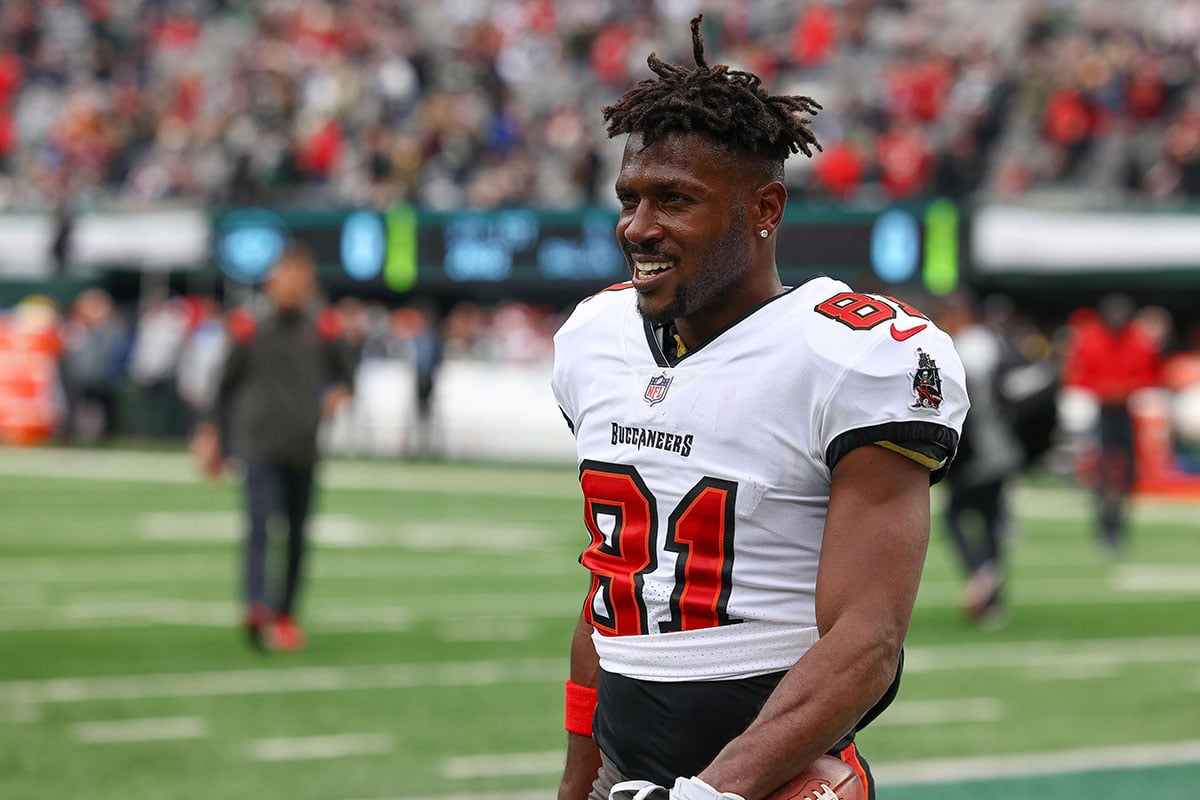 After being bombarded by statements from Antonio Brown and his lawyer Sean Burstyn on Wednesday, the Bucs finally responded. On Thursday afternoon, the team announced they were releasing Brown. The former All-Pro exploded on the sideline Sunday, ripping off his equipment and exiting the field. The incident prompted Bucs head coach Bruce Arians to declare Brown was “no longer a Buc” after the game.

On Wednesday, Brown issued a statement that the Bucs attempted to force him to play despite serious injury. The statement accused other things, including a throat-slashing gesture by Arians that enraged Brown. On Thursday, Arians told his side of the story. Unsurprisingly, things went a little different.

“Obviously, we let Antonio go today,” Arians said. “Just to clear you up on some things that happened. At no point in time during that game did he ever ask a trainer or a doctor about his ankle. He never went up to them. That’s the normal protocol. You go through protocols during games. I was never notified of it.

“So that was the disturbing thing when we were looking for him to go back into the game. He was very upset at halftime about who was getting targeted. We got that calmed down. Players took care of that. But it started again on the sideline. We called for the personnel group that he had played in the entire game. He refused to go in the game.

“That’s when I looked back. and saw him basically wave off the coach. I then went back and approached him about what was going on. (He said) ‘I ain’t playin’. ‘What’s going on?’. ‘I ain’t getting the ball’. That’s when I said, ‘You’re done. Get the ‘F’ out of here’. And that’s the end of it.”

Arians story obviously differs greatly from Brown’s, who never mentioned targets as an issue. However, Brown shared a post from rapper Kodak Black on his Instagram story that suggests different. Kodak Black posted that the Bucs were trying to not play Brown so he wouldn’t get his bonuses. Brown sharing the post suggests he agrees with it.

“I don’t know,” Arians said, laughing. “Is that a throat slash?” Arians pointed as if gesturing for Brown to get off the sideline. “That’s all it was.”

As for Brown saying the Bucs pressured him to play, Arians disagreed strongly.

In his statement last night, Brown said he had texts from Arians proving that the coach knew he was seriously injured and pushed him to play anyway. But when Brown revealed the texts on Thursday morning, they showed normal communication between coach and player.

“You saw the texts,” Arians said. “I mean, it was out there. It was, ‘If you can go on Saturday I want you with the team, in case you can [play]’. Then he participated in Saturday walk-through like he was [playing]. So there was never another question about it.”

Earlier in the week, NFL Network’s Ian Rapoport reported that the relationship with Brown began souring when he returned from this 3-game suspension. However, Arians disagrees.

“No, I never got that feeling,” Arians said when asked if Brown was upset after returning. “I saw him here in the building and told him he was not going to be released. And that we were going to stand by him. Everything was good. Everything was great until the third quarter.”

As for the incident being a distraction amongst the team, Arians isn’t worried.

“Our team is great,” Arians said. “Our team knows the truth. They know what happened. Our guys are fine. They’re ready to play Carolina.”

About what we expected from this dbag of a human being. If any team even thinks of taking this guy in they have no sense of moral compass and team unity. Brown doesn’t need help, he needs his ass caught in the act outside of football and thrown in jail

Acting like some other team has no moral compass is just silly. AB was the same guy before we signed him and we did it anyway. So if your gonna say that than say the same about Tampa. I don’t regret it one bit. He helped us win a championship. Now he’s gone, oh well.

Well after a year of him actually staying on the right path, I figured he might have finally figured it out. It’s true when they say a tiger can’t change its stripes. If you can’t play with a players coach like BA, the goat at QB, and a number one receiver like Evans who is all about the team, then there’s nothing he can bring any team other than trouble.

No shit! Don’t get it twisted. AB helped our Tampa Bay Buccaneers win the biggest game in franchise history. A home game SuperBowl! We used him and he used us but neither one cared, we were getting our share!

See, now this sounds way more like the AB we all know and love. Whine about targets, pitch a fit, refuse to play, and storm out.

I already knew who to believe before anyone’s story was told. After having both, one certainly fits the enigma that is AB way more than the other one.

It’s a media feeding frenzy. I see Jon Ledyard smiling from ear to ear because he don’t have to write about football. This is about the 10th article written about this tmz topic. Maybe now we can get back to football

Yes, lets get back to football. No more soap opera

Exactly, I wish BA would just shut up already. If he just dropped it the story would die. He’s gone, who cares what the story is behind it. It would all come out eventually anyway.

So many on here calling AB a dbag and how if any new team signs him, they’re idiots. Sounds like same shit Pitt, Vegas and NE people said before Bucs signed him. AB has been a diva/flake his entire career. This organizational embarrassment will live on for years.

What team did he catch multiple balls and a TD for in the Super Bowl?

Organizational embarrassment for years to come??? We gave AB another chance. We won the biggest game in franchise history, a home SuperBowl! So, not so sure what u r referring to? The embarrassment is his alone. The Bucs actually look sympathetic as we gave a potential Hall of Fame WR another chance to play in the NFL again. In fact, it’s nearly already forgotten as we concentrate on setting a franchise record in wins (13) this weekend as we head into the playoffs to defend our SuperBowl title! Who were we talking about again? No player is above the league!… Read more »

So true. The Steelers, Pats and Radiers have become shells of thier former selves since they had similar experiences with AB. Mike Mayock, Mike Tomlin and Bill Belicheck can’t show thier respective faces in the local communities because of their dealings with AB.
All of them are often heard muttering, “the horror, the horror, the horror.”

Not for us. He’s done and didn’t cost us Draft picks like Vegas. His contract was minimal and he helped us win a ring. Bucs will be fine.

With all of the spinning going on from the Brown lawyer the last couple days, I expect the Bucs felt that they finally had to say something, and that whatever it was that was said was thoroughly vetted by the Bucs lawyers .. and Bruce Arians was likely instructed on what to say and not say in order to avoid lawsuit bait. BA is normally a pretty expressive guy, known to say things that are not considered socially correct. I believe the Bucs were reluctant to say anything at all, because aside from giving ammo to Brown’s lawyer, the only… Read more »

Ian Beckles said it best. When Antonio needs you everything is fine, but when you need him that’s when he thinks he has power and can act a fool and do what he wants. With Godwin gone he knew that his presence was gonna be important and figured he could do what he wanted and complain about targets. As we all thought. He is gonna be mad about targets and then refuse to go to throw a fit… Silly. Brady got him the bonuses he could in the last game last year, he had a whole other game and a… Read more »

What is enraging is the brain dead idiots on Facebook and Social Media, on Bucs Fan sites, Bucs Fans, taking Browns side and saying Arians was wrong and those messages proved it and they lost respect for Arians. It’s like, are you serious? You either don’t know Football at all, or are straight up moronic if you think those Texts were anything but standard and proved Brown wrong.

I was fine with him coming back if he had any humility and apologized and if it was a misunderstanding, but he obviously has no humility and what appears to be Paranoid Schizophrenia because he thinks everyone is against him. Even with Bradys trainer, Brown was lazy and didn’t complete his sessions, asks for half the money back, the guy says ok and Brown thinks it’s clear that the guy was trying to cheat him. I mean it’s right there in black and white and he thinks it’s evidence that shows otherwise. It’s pure insanity.

Hit the nail on the head Spit. The Carolina game with Evans and Godwin out emboldened AB and was the beginning of the end for AB.

Yeah AB your were Hurt so bad you could do jumping jacks on way out though. Lol. Sad liar. He’s a complete liar and a douche bag that apparently likes to stiff people for money he owes them as well. Good riddance we should never signed him first place. Brady wants a super bowl and he’s talented but did he really think this wouldn’t happen eventually? Why? It happened everywhere else he went. Once we got a super bowl and one season from him Bucs should counted themselves lucky and moved on. He does this eventually to every team.

Very unprofessional of Arians just exploding and telling Brown he’s gone. You have to know who you are dealing with and de escalate. It always works out better when you let time pass and cooler heads prevail. The thing about arguing with a fool is people have a hard time figuring out who the fool is. Arians will spend an inordinate amount of time explaining all this and by the time he’s done will look nearly as foolish as Brown. It could have all been avoided with some space and time. A leader of men knows you don’t confront a… Read more »

No some Fools are spotted pretty easily but hey you’re welcome aboard the Pirate Ship anytime.

Never trust a liar. AB is a bgf one. But hell, I guess he figures everybody else lies. We had a prezdent who lied daily to the american people for 4 yrs and the crowd yelled, More.