On Sunday the Bucs stacked road victories back-to-back for the first time this season. But the victory appeared to come at a cost. During the action, starting cornerbacks Sean Murphy-Bunting and Jamel Dean went down with injuries. Dean was ruled out and placed in concussion protocol. But after the third-year cornerback’s examination, head coach Bruce Arians feels optimistic about his availability for Week 14 against the Bills.

“Right now, Jamel is in the protocol,” Arians said. “He looks like he’s in pretty good shape. So hopefully we can get him out of the protocol by Sunday.”

Dean has played well this season, breaking up a third down pass in the end zone on Sunday. He’ll be needed against a high-octane Bills passing attack this Sunday. Murphy-Bunting availability is also in question after he went down with a head/neck injury on the Falcons final drive. On Monday, Arians made it clear he’s not concerned about the third-year cornerback. 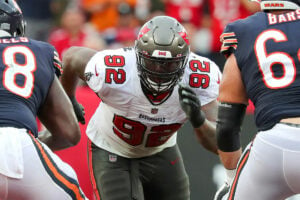 Meanwhile, Bucs ironman Will Gholston also limped off the field on the Falcons final drive. Gholston has missed just ten games in his 9-year career, and none since 2017. If he can’t play against Buffalo, Steve McLendon would likely play in his place.

“Will has a little patella tendon issue,” Arians said. “Don’t know how serious that is going to be. I need to see a couple days worth of treatment. Hopefully we didn’t lose anybody for this next ballgame.”

Arians was also asked about two Bucs on injured reserve: WR Justin Watson and CB Rashard Robinson. Watson was ruled out for four months following knee surgery in July. Technically, Watson is on the PUP list. Robinson was one of the team’s top special teamers until a hamstring injury landed him on IR in mid-November.

“We’ll have to wait and see as far as Rashard,” Arians said. “He was one of our better gunners. But obviously we’ve gotta start letting people go to get people back on the roster now. That’s a tough thing to do. Justin Watson, I doubt it. A lot of injuries would have to happen.”

The Bucs return to action on Sunday against the visiting Buffalo Bills.

Hated to see Gholston limp off. He’s been really balling lately. He’s playing some of the best ball he’s ever played! Get well big fella!

Missing Gholston will sucks but if we can have Davis, Dean, SMB and maybe Sherman available it will be huge for us.

When is he going to give an update on Sherman? I’m not even sure if the guy has anything left or not but was hoping we could find out before the playoffs.