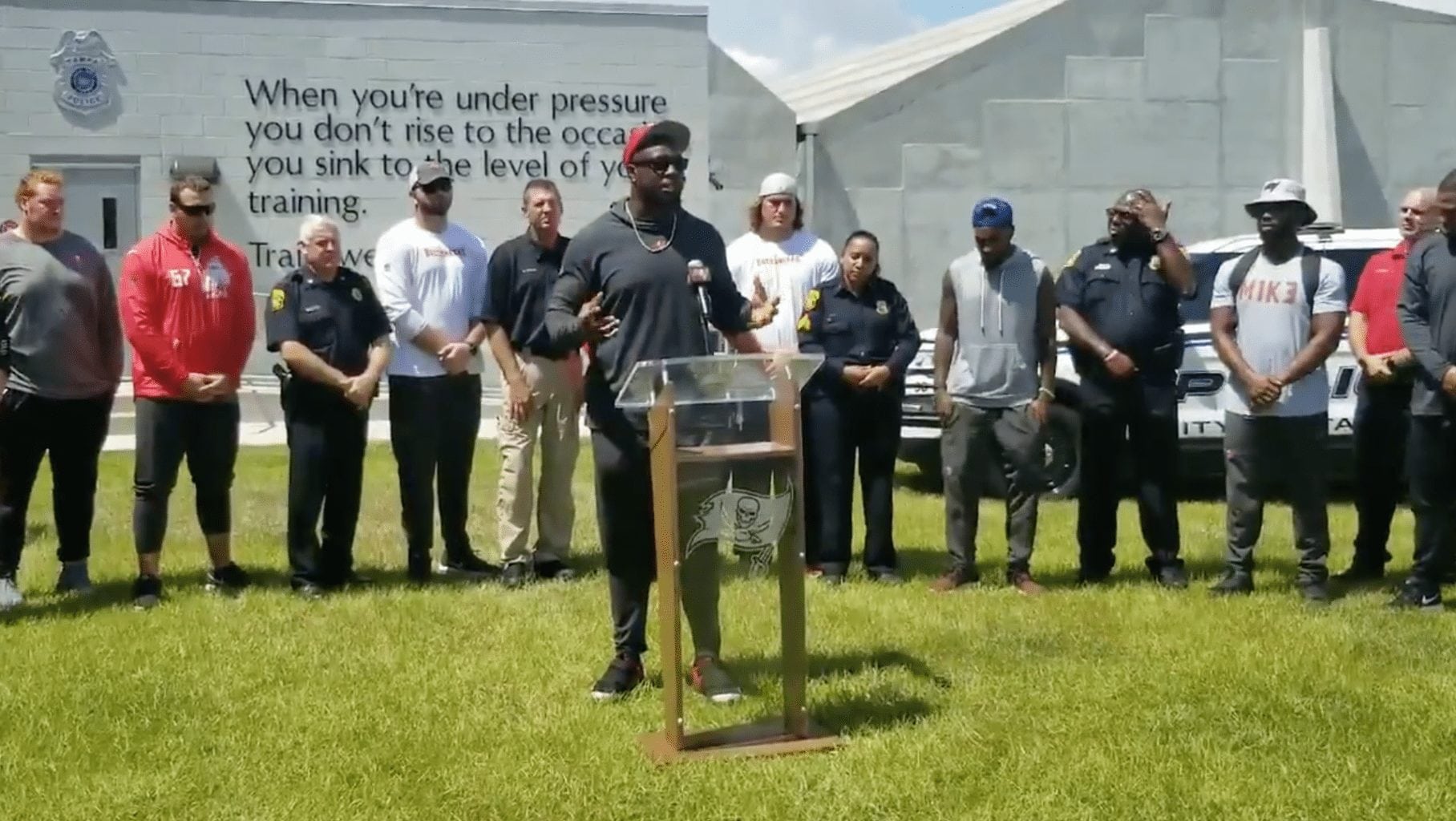 “For us, this is huge,” McCoy said, “We did just play a game a couple of days ago. Everybody is hurt, everybody is tired but it’s that important for us to be here. And it’s not just about, ‘Oh, well, this is how we feel. Hear us.’ It’s an open conversation. We expect both sides to be open and honest and hear what each other has to say.”

Players arrived at the Tampa Police Department Training Academy and took part in a situational training session where they would learn about and experience the rigors of the quick decision-making process officers must face, followed by a private question and answer portion between the players and officers.

#Bucs WR DeSean Jackson on going through police training simulation: “Yeah, man they got me… I was a police officer doing a routine stop and they just started shooting at me… it was good to see what they go through.” pic.twitter.com/l9rd87xhDJ

#Bucs DT Gerald McCoy: “I went through the police simulation… it happens fast… it teaches you that you have to make split-second decisions… it taught us that it’s easy to watch from afar and say what someone should’ve done, but in the heat of the moment it’s a lot harder.” pic.twitter.com/F3umKKrdrV

“This is a challenge unlike anything we have faced as a nation,” Buckhorn said. “But ultimately it’s up to us how we resolve that quandary. It’s about communication. It’s about treating people with respect. It’s about recognizing the differences in our communities and acknowledging them. It’s understanding that as a country and with our diversity we are stronger and we are better because of that. It’s understanding the role of the police department and for one brief moment walking in their shoes.”

Tampa mayor Bob Buckhorn on what this social justice initiative will show people: “I think this program will show folks that [these athletes] do care. That they have concerns, that they care about social issues… and that they’re willing to put their money and their time to use” pic.twitter.com/DJJEs0COvX

This initiative is a big moment for the Bucs and the community around them, especially with the continuous controversy that surrounds NFL players kneeling for the national anthem.

In his press conference at the event today, McCoy even looked back on the closed-door meeting the organization had a year ago and thanked the Glazers for giving the players an opportunity to speak on behalf of their own feelings and experiences, claiming that this all started then.

Gerald McCoy speaks at the Tampa Police Training Facility for the announcement of the #Bucs player-led social justice initiative. pic.twitter.com/qBrRzAIQUv

McCoy and Jackson emphasized that this isn’t a one-time thing, either. The Bucs as an organization will be holding events in the Tampa Bay community on a monthly basis throughout the season that will continue into next spring and summer, working with organizations like Abe Brown Ministries, Habitat for Humanity and others.

Kassewitz also announced that the Glazer family would be matching all donations, up to $1 million total, made by Bucs’ players toward any organization dedicated to social change.

“I was struck [in discussions with the players] by their true passion for this cause,” Kassewitz said. “And I see that today was an unbelievable start to what’s going to be an ongoing improvement.”

The initiative’s next event will be October 16th as the Bucs join Abe Brown Ministries to support the organization’s Ready-4-Work Ex-Offender training program.

“We are the change.” McCoy said. “We understand that we’re role models and we understand that we can’t just be across the white lines. If we want to talk about it, we have to be about it and that’s what we’re here to do. This isn’t a one-time thing, this is a yearly thing that is starting today.”

So were the police expected to learn anything or was this just an attempt to change the players minds that cops are always justified when they shoot someone? Seems kind of one sided even through all the talk about “open minds” and “listening to both sides”.

I found the article strange in a similar way – hopefully the reality of the event was much different.

Sure seems to go against the Glazers political values as die hard Trump supporters.

I think the event itself is a good idea. If this quote from McCoy truly occurred, then I think it was money well spent to have this event: “And it’s not just about, ‘Oh, well, this is how we feel. Hear us.’ It’s an open conversation. We expect both sides to be open and honest and hear what each other has to say.”