Bucs LB David: “We Haven’t Had This Much Fun In A While”

Home » Articles » Bucs LB David: “We Haven’t Had This Much Fun In A While” Bucs LB David: “We Haven’t Had This Much Fun In A While”

Home » Articles » Bucs LB David: “We Haven’t Had This Much Fun In A While”

Coming off a disappointing 5-11 season with a plethora of new guys on the roster better mean that some things are different around One Buc Place.

Fans, media and even the coaches are probably looking for players to say there’s more focus or that there’s a better sense of urgency to get the most out of this team right from Week 1 starting this season. But, there weren’t many who thought that the phrase “having more fun” would be what the biggest takeaway has been since starting OTAs a month ago

For veteran and All-Pro linebacker Lavonte David, that’s what he’s notice the most about this new Bucs group.

“Just trying to build a bond with the guys, old and new,” David said. “It’s been great so far talking to the guys and just knowing where their mindset is at… We’re competing with each other and were out here having fun, it’s crazy, I don’t think we’ve had this much fun in a while when we’re out here. We’re making plays and just trying to make each other better. When we first got here Dirk said: it’s competing, but at the same time have fun. So we’re trying to make each other better.”

David said the team is having fun, but also putting in good work. 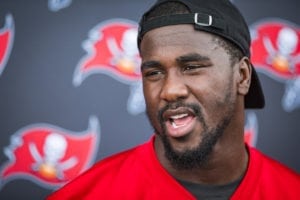 “From the young guys to the old guys, guys caught on real fast,” David said. “Those guys stepped up right away and are not making many mistakes or mental errors, guys are coming taking this serious. I think the big thing that helped out was the coach smith demanding everyone to know their job and putting people on the spot for their. That’s why you see a lot of guys out there making plays right now.”

The influx of new talent has created even more competition, which in turn creates fun and spirited practices.

“When you’re out here competing it brings the guys across the board to bring their level up too,” David said. “There’s a lot of trash talking going on out there, a lot of yapping, you know guys are having fun. The competitiveness is picking up. You see rookie Carlton Davis going against Mike Evans and battling. He may not be talking right now, but we’re talking to him. That brings out guys competitive nature, and you see that across the board on both the offensive side and the defensive side. You got Jameis trash talking, everybody is trash talking, it’s not just doing it for fun, we’re doing it because we want to get each other better to build up that self-esteem and build up that confidence so when we’re out there we’re gonna give our all.”

Who is the biggest trash talker on the team?

“Obviously Kwon, you all know that already,” David said. “He’s one of the biggest trash talkers out there, but it’s fun, I love it. ”

Some have coined the NFL the “No Fun League” but David said that certainly isn’t the case at Bucs practices so far this offseason.

“When you’re having fun it means you’re doing what you’re doing,” David said. “Guys out there, we’re having fun, everybody is doing their job right, and it’s fun. That’s the main thing, coach smith did a great job of demanding guys to make sure they know what they’re doing, making guys speak up, things like that. Holding everyone accountable is the main thing and we’re doing that as a unit. Don’t be afraid to take constructive criticism, so when guys are out there learning and making plays, it becomes fun”

– Trevor Sikkema contributed to this report

Even though it’s a job still gotta have fun doing it or you won’t enjoy it… No fun means it’s repetitive garbage everyday..

Hope those two like what they see going on up front….

Winning is fun, losing not so much. Let’s hope we all have fun this year.

As much as I enjoyed it, no doubt that Hard Knocks was a huge distraction for this team.

When you look at all of the talents we have spread across the Buccaneers’ roster we should all be excited. We should see a lot of tough competition to make the roster for the rest of the offseason. We should be, more than in a long, long time, able to see less of a drop off when guys go down and have to be replaced during this season. We should see more rotation of guys at certain positions during the games so that we can be still fighting down to the wire in every game at the end of the… Read more »

I said Hard Knocks would be a distraction for our Bucs. And it was somewhat. All of the hype and the..Tree Humper himself..Swaggy. This year nobody really expect our Bucs to do much. Experts are picking them last in our Division. Thats good.
As long as our Defense has improved, we will win more games. Definitely those close ones. I remain cautiously optimistic. In about 3 months, we shall see.