Licht, Koetter Surprised Howard Was Available For Bucs At No. 19

Home » Articles » Licht, Koetter Surprised Howard Was Available For Bucs At No. 19 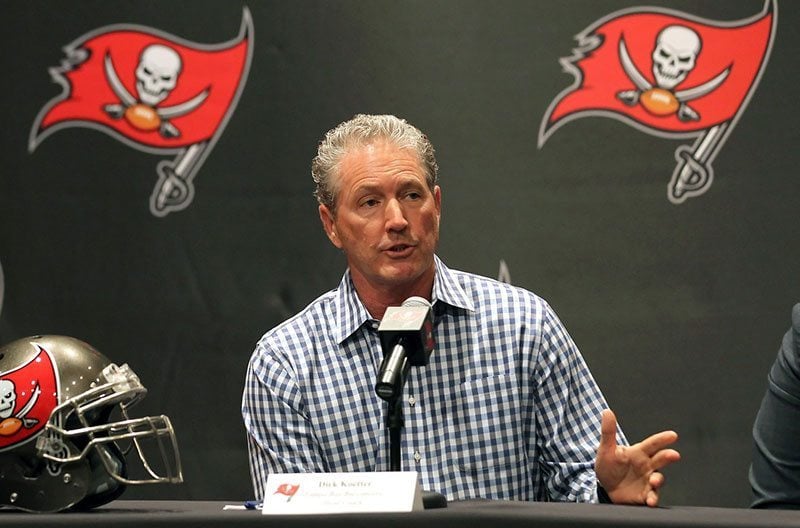 Licht, Koetter Surprised Howard Was Available For Bucs At No. 19

Home » Articles » Licht, Koetter Surprised Howard Was Available For Bucs At No. 19

The unofficial rallying cry for the Bucs this offseason has been “Weapons for Winston.”

With the addition of tight end O.J. Howard on Thursday night, the Bucs accomplished that. And there are still six picks to go.

Both general manager Jason Licht and head coach Dirk Koetter were both beyond excited when speaking to the media just minutes after the pick was made.

“We’re all happy but that’s the biggest hug I’ve ever gotten from Coach Koetter,” Licht said during his press conference Thursday night at One Buc Place. “He is beyond excited. I’ve already heard from Jameis [Winston], I’ve heard from other guys on our team, and there’s a lot of excitement around here right now.”

Fueling that excitement is the size and versatility Howard is bringing to Tampa Bay. Licht made it a point to mention 6-foot-6, 250-pounds on multiple occasions when answering questions Thursday.

“The true Y tight ends are a dying breed in college football, so there’s not that many teams left that utilize a player like O.J.,” Koetter said. “And in the NFL I think it’s still one of the best weapons you can have. Here’s a guy that has the speed to run down the seam and the power to block a defensive end at the line of scrimmage. There’s not that many of those guys around, so we’re very fortunate that he was still there and we’re excited for him to be joining the Bucs.”

Then there’s the excitement that came with Howard even being available when the Bucs were making their selection at No. 19.

“It was a little bit of a pipe dream during the process that he would get there,” Licht said. “Got a little itchy and we decided to stay patient. We were getting some action at our pick. I have a feeling a lot of teams were probably after him.

“But that was the most excited I’ve seen the entire room since I’ve been here since we picked Jameis with our first-round pick.”

When the pick was made around 10:20 p.m., the Bucs made Howard the organization’s first-ever tight end selected in the first round. He’s the team’s 38th all-time first-round pick.

Licht provided a little insight to the Bucs’ war room analysis, as well, when asked about Howard’s biggest upside.

“He’s big, he’s a huge target, makes contested catches, he’s athletic, he can run, I think he’s going to help you immediately in the passing game but then he’s eventually going to develop into a really good blocker, as well, with his length and his effort,” Licht said. “He’s a tough guy. He’s a tight end prospect that doesn’t come around very often: the multi-faceted, across-the-board type of guy.”

As for adding explosiveness to the offense and filling Winston’s toolbox with dynamic options, Koetter said Howard’s selection does just that.

“We said we needed more explosive players and this is an explosive player, he just plays inside instead of outside,” the head coach said. “We were fortunate enough to add speed on the outside with DeSean Jackson to pair up with Mike [Evans] and now we’ve got two tight ends to pair with Cameron Brate.”

Winston hadn’t released any social media messages reacting to his new tight end from his home state when this article published, but Licht assured everyone that the quarterback is amped up for the pick.

“Jameis … I got a text from him with about a million smiley faces, so I know he’s happy,” Licht said.

I’m so thankful OJ was available. I’m really excited about this player. Now come back and address the CB/S/WR position.

I know nearly every GM says, “we didn’t expect him to be there” when discussing their first round selection, but in this case I don’t know how anyone could have predicted this top ten player would make it down to us. This is a very rare TE who, when teamed with the others already in Jameis’ arsenal, will give us an offense that we’ve never had before. I know, some folks think the O-line needs an upgrade, but in my novice opinion, the move of Marpet to center, Sweezy taking the RG spot and Panphile or another player focusing on… Read more »

With Howards blocking ability, our O-line did get an upgrade.

Love the pick. Really excited about our offense. Our wide receivers and TEs could be the best group in the NFL.

When licht and lovie picked ASJ…i gasped.. but this is an awesome pick. OJ is tough.

tons of talent left on the board.. maybe we can make a move for Dalvin Cook :D

Keep in mind we are one injury away from complete disaster at offensive tackle.. see dallas game last year

It just shows you most teams don’t take the BPA in the first round. They draft for need.

I don’t think that’s generally true. The big, overwhelming exception that any team and any GM will make to BPA is with the quarterback position – if you don’t have one, ya gotta get one above all else. And the unprecedented three first round trades resulting in quarterback picks last night was an all time NFL record. Outside of the three QBs in the top 12 picks, I think most of the teams actually did tend to take BPA.

I love this pick! I got a feeling if the Bucs don’t make a move for Cook, or if he’s gone by the time they pick in round 2, they are going to get Mixon. I heard this past week Licht say that the fans may not like who they are going to pick at 19, but I don’t think they were planning on Howard being there. Which at the time made me think they were looking at Mixon. I think Mixon would be a great pick if the Bucs believe he is a good fit for this team, and… Read more »

Scott REYNOLDStake a look at this .

On a different topic, did anybody know that John Lynch was a fierce negotiator? He played the Bears like Rex Ryan played the Bucs on the Revis trade

Well, yes and no … it’s “to be determined”. The Browns have been exceedingly good at trading down from high draft picks and getting more picks as a result .. and then they proceed to pick high again the following year, year after year. They desperately needed a quality quarterback, and didn’t get one again. This is Year Three of the so-called “brain trust” at Cleveland. Eventually a team has to do something other than win the draft trading game. You know, winning football games and at least make the playoffs is the real objective. It’s next to impossible to… Read more »

If this was a college draft I wouldn’t be surprised he fell, but the way NFL teams use T.E.’s it’s amazing he was there. New Orleans hasn’t been the same since Graham left, Olsen has been a thorn in our side since forever. I could go on, and on, look how bad we looked when Brate went down, we looked to be on the rise till ASJ flamed out. Still not sure Martin’s safe as a Buc, tons of good young, cheap backs available. Having to miss the first three games hurts his chances. Still see running back as a… Read more »

I guess teams still consider TE a luxury pick as compared to a needs pick. It was the one thought I had which made me believe Howard could fall to the Bucs.

I agree RB is a must (today not tomorrow) but the reports are that Doug looks really good. So I think we are in a win-win situation on RB

Amazing!!!! I didn’t even think OJ Howard would be around for us to pick. Awesome Start!!! Go Bucs!!!!

And Thank God we didn’t pick a RB with our first pick.

Quite a nice surprise. Go Bucs!

Not sure which staff member at Pewter Report put out a board that may look like the Bucs board, but I printed it out yesterday just before the draft began and checked the players off one by one, waiting for the Bucs pick. It was exciting to see names on the board “fall” and I was elated to see multiple options such as OJ, Baker, Cook and Awuzie, still there when their pick came. And true to your board PR, the top 4 on your list were gone and the Bucs picked the best available at No. 5 on your… Read more »