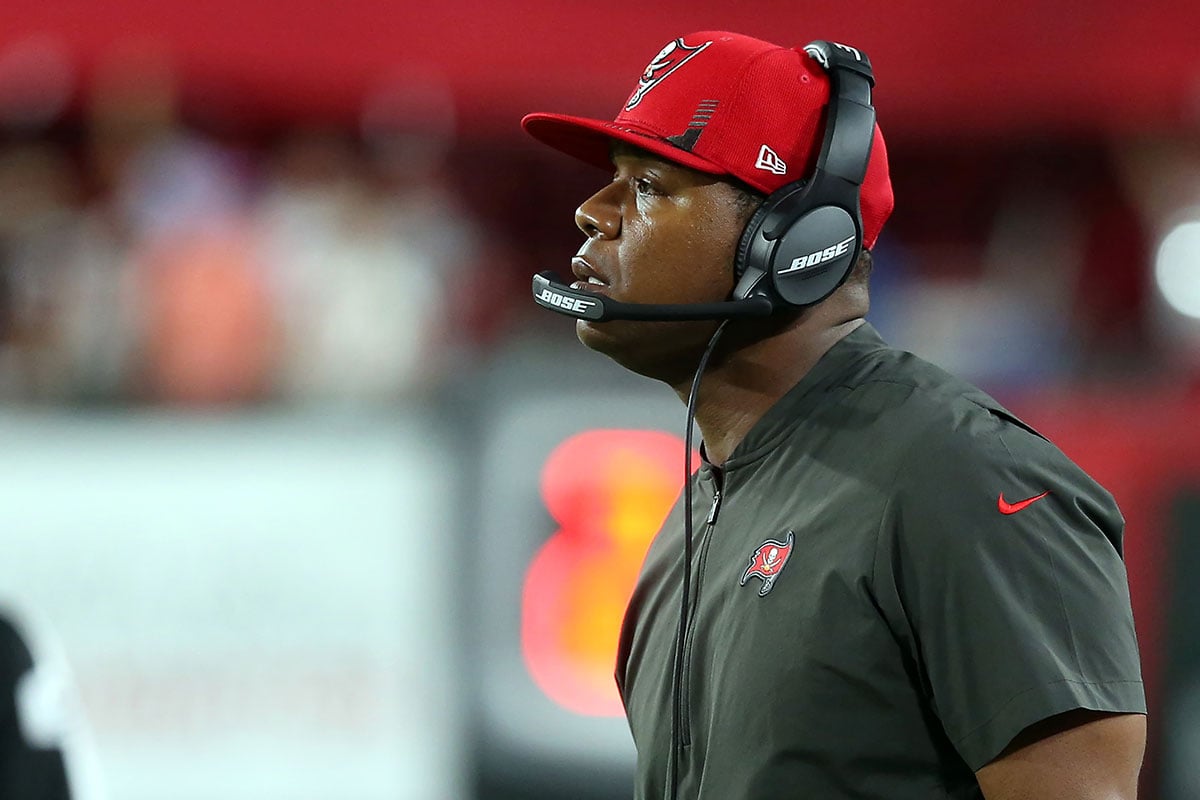 The Bucs will have more than just players to replace on the roster this offseason. According to Eric Dillard of The Bold Take Podcast, the Jaguars are hiring Tampa Bay offensive coordinator Byron Leftwich as their next head coach. SB Nation’s Demetrius Harvey confirmed the report shortly after.

Can confirm, #Jaguars expected to hire Buccaneers OC Byron Leftwich as their next head coach, per multiple sources. @E_Dilla was on it first.

Leftwich has been the Bucs offensive coordinator for the last three seasons. Before that he served on Bruce Arians’ staff with the Arizona Cardinals. Arians promoted the former NFL signal caller to quarterbacks coach in 2017. Leftwich earned the interim offensive coordinator job following Mike McCoy’s firing in October of 2019.

Under Leftwich the Bucs have had tremendous offensive success. This season, the offense finished first in yards per game (405.8) and passing yards per game (306.6). They also ranked second in the NFL in points per game with 29.4.

During the Bucs’ end-of-season press conference on Monday, January 24, head coach Bruce Arians was asked if  Leftwich’s departure meant it was likely he would go back to calling the plays on offense.

“It would be a really good chance, yes,” Arians said.

In terms of who will replace Leftwich as offensive coordinator, Arians said it’s a wait-and-see approach.

“I’ve gone through a number of different scenarios in the last few weeks just in case,” Arians said. “We’ll have to wait and see.”

Pewter Report has reported that wide receivers coach Kevin Garver would be promoted to the role of offensive coordinator to replace Leftwich. Arians’ recent comments suggest that Garver wouldn’t be calling plays, though.

Meanwhile, Pro Football Network’s Aaron Wilson reported on Tuesday that Leftwich wants to bring Garver with him to Jacksonville. If Garver departs, look for assistant wide receivers coach Thaddeus Lewis to be considered for the offensive coordinator position.

J.C. Allen is one of PewterReport.com’s newest beat writers. As a New England transplant, he has closely followed Tom Brady’s entire career and first fell in love with the game during the Patriots 1996 Super Bowl run. J.C. is in his second year covering the team after spending a year with Bucs Report as a writer, producer and show host. Some of his other interests include barbecuing, being outdoors, and spending time with family and friends. His favorite Buccaneer of all time is Simeon Rice and believes he deserves a spot in Canton. Follow J.C. Allen on Twitter @JCAllenNFL.
Subscribe
Login
Please login to comment
28 Comments
Oldest
Newest
Inline Feedbacks
View all comments

Wish Leftwich well. Don’t think he’s ready yet, but a good fit for Jacksonville with his former ties to the team. As the world turns… stay tuned, it’s about to get interesting!

Agreed on Leftwich not being ready yet. I also think Jacksonville needed to go with an experienced head coach rather than another first-timer after Urban Meyer proved to be a disaster.

Could Pete Carmichael be his replacement? He killed the Bucs regularly.

wish it was Bowles… bad news, should bring some coaches and FA (Godwin? Cappa? Stinnie?) with him.

fredster
Reply to  The Freeman

I do too but I think this years defense overall and end of Rams game kind of put an end to anyones serious interest.

Of course one play killed the entirety of Bowles’ career. Really? That’s like saying one fly in the clam chowder put your restaurant out of business.

Spitfire
Reply to  The Freeman

No Offense but I don’t think any of them will be following Leftwich to Jacksonville.

Best of luck Byron and thanks for the memories

Congratulations Byron Leftwich! Jax is a perfect fit for him with. Young QB with a bunch of decent young players around him, draft picks, and lots of $ cap space. I couldn’t be happier!

Congratulations to Coach. Jacksonville got a good coach and a good person.

This is their Raheem Morris hire, but good, it means we don’t have to see a run on first down 90 percent of the time hoping the defense never catches on. Clearly not a hire based on merit, not even up for debate.

Idiotic. Raheem was never a coordinator before taking HC job. He was the DB coach.

Guess those other offensive rankings and team record were meaningless.

Thank god.Don’t let the door hit you on the way out. The Jaguars problems will continue.

He’ll be fired in 2 years. He’s not ready to be a head coach and that team is the worst possible scenario. Raheem Morris 2.0 is right. This is good for us though. Let’s get a new perspective on calling plays with Arians at the helm.

Doubt he’s successful or ready, but who knows. I know I’m not heart broken to see him go I think many times we could have done better in lot scenarios. Still thanks for being a Buc and good luck. How’s that for a rhyme.

Correct me if I’m wrong, but this means we get an extra 3rd round pick this year and next year!?

Based on the new diversity rules, (rewarding teams that develop minority candidates), the Bucs will get an extra 3rd rounder this year and next year with this hire. Hate to see him go but two 3rd round picks are definitely welcomed!

Bucs fans are the biggest imbeciles in the nfl. The amount of criticism for the best offense in Bucs history is unbelievable.
if I could go back to 03’ and choose a favorite team I’d do it just to not be a part of this fan base.

Then go, success doesn’t ride on one person and can be despite it. We won despite the stale predictable Offense he tried to force. Brady’s influence at the helm and all our talent overcame the deficiencies.

Yep Spit! I agree! We can do even better on offense! Why wouldn’t a fan want that?

Any OC would’ve had success with that talent and Brady at QB. Remember, the Bucs aren’t firing BL, he’s upgrading his position. The Bucs just might benefit from this move. Although Bowles was a bigger problem than BL! We r just to see how we can upgrade things for this coming season and perhaps be even better next season! We’ve got to improve! What we did last year has no bearing on what happens this next season. We all just want to see Brady back for one last run at a Ring!

Seems like Bruce is planning for OC without talking with Brady–wonder how that sits.

Honestly I’m fine with this. Good for Byron, but while at times our Offense looks great, other times it just doesn’t make any sense at all like with the lack of RPO and screens and all the stuff that makes Offenses run more smoothly and not always rely on splash plays to succeed. As much success as we had in 2020, I think changes need to be made to help keep us ahead of the curve. Not complaining about our success, but I feel like we have succeeded because of our players more than the stale schemes that held us… Read more »

Am I wrong for being glad this is happening? I wish BA would have been calling plays all along…

That’s what we all thought when BA was hired! Then he pulled a little switch a Roo by having BL call plays. If the truth be known, and I know this is not going to be popular, but I’m ok when BA decides to retire. The responsibility of the coaches and their play calling is, ultimately that of the head coach. BA could have told Bowles and Lefty what he wanted to see and what he didn’t want to see. BA is so old now, he just lets his Coordinators do as they please. I think this is wrong. Ur… Read more »

So let me get this straight. You folks want to run off the offensive coordinator who oversaw a top 5 unit because he didn’t run enough play-action passes and ran a bit too much on first down? Guess the other accolades, of which Byron was a part, are meaningless. Apparently end results mean nothing. OK, so now who?