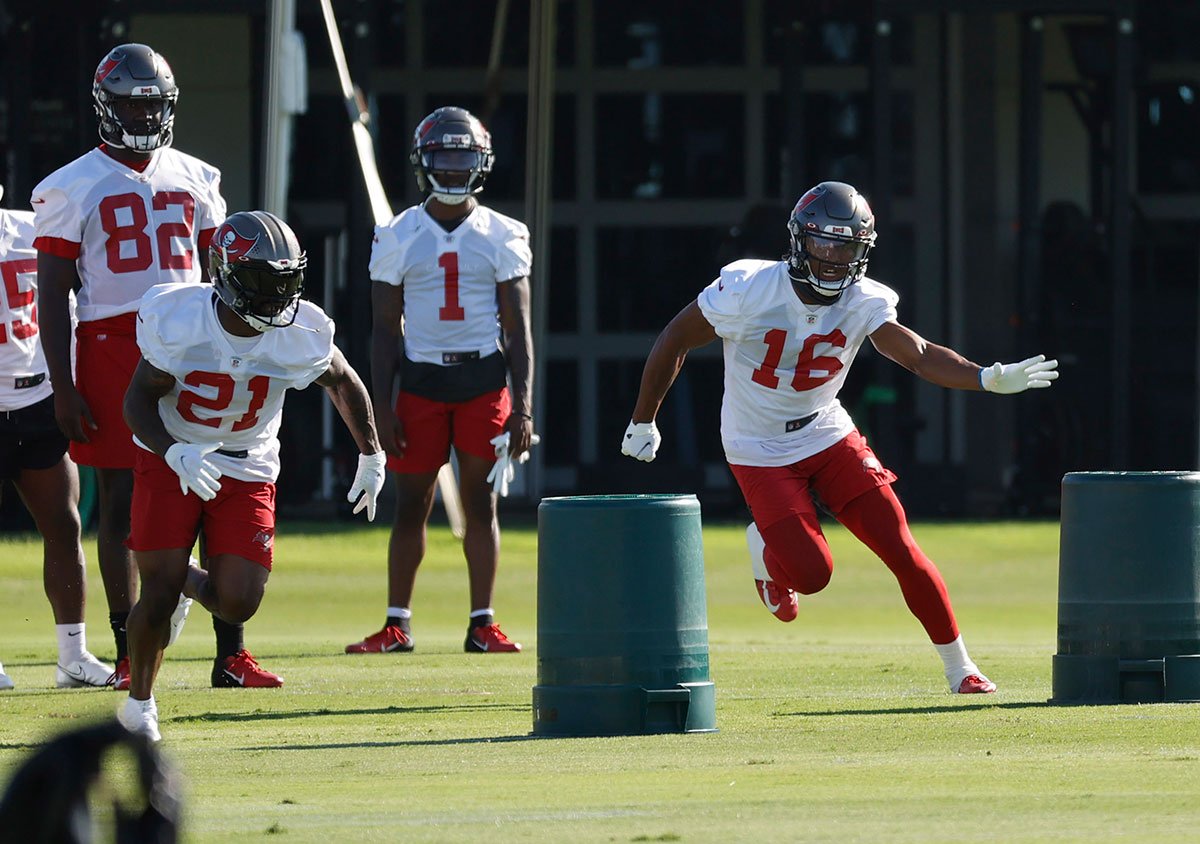 The last day of Bucs mini-camp felt like the Friday before a game during the season. For most of the practice it was essentially a glorified walkthrough. Players didn’t even have their helmets on halfway into the session as they went through different formations. But when the Bucs finally went live, the intensity ratcheted right back up.

Tampa Bay worked on goal line and red zone situations when things got going. Admittedly, it was difficult to catch every play as the players were lined up on the opposite side of the field. On top of that, those who were not on for a rep all lined up a few yards behind the quarterback, making it tough to see as the play went on. One thing that was for certain, though, was that Tom Brady was spreading the wealth with his teammates near the end zone.

With multiple players at his dispense, Brady wound up throwing touchdowns to five different Bucs players on the day. That consisted of touchdowns to Mike Evans, Chris Godwin, Travis Jensen Leonard Fournette, and Cam Brate. He threw multiple touchdowns to Evans as well, and could have added another name to the list had it not been for a pass that went off the hands of Rob Gronkowski.

Though it was mainly seven-on-seven’s at the goal line, the defense wasn’t making it easy for Brady. He was attacking all different areas of the end zone, starting with the left side. He had great timing with Fournette amidst his score on a route to the sideline just a yard over the pylon. It was just far enough away from the defender for Fournette to secure the catch. Then it was time for the corner of the end zone as he found Evans making a break to that spot and Brady hit him right in stride.

Brady continued his methodical tactics against the defense by exploiting the middle part of the end zone next. That’s where he found Brate in his usual spot, followed by a nice diving catch from Chris Godwin.

While Brady’s chemistry was probably best with Evans on Thursday, he really hit it off with Travis Jonsen as well. The duo is not one that we’ve seen all too much, but they connected on a touchdown in the back right corner of the end zone along with a couple more receptions during 11-on-11s in the last session of practice. Jonsen was a player that Jason Licht was excited about heading into this year and it looks like Brady has taken a liking to him as well.

Reps for Brady were limited during the last period when the Bucs moved to 11-on-11s. The vantage point was better to see, though, as these took place closer to where the media members were watching. He connected on a nice 20-yard pass over the middle to Evans and a deep ball down the right sideline. Brady found two Scotty Miller on two consecutive plays, getting him some looks.

The other noticeable storyline on Thursday was the return of Jaelon Darden. Bruce Arians said on Monday that the goal was for him to practice on the last day, which he was able to. It was curious going in to see who Darden would be working with and at the expense of any other players. For the most part, it was quarterbacks Kyle Trask and Ryan Griffin that he was getting throws from. Darden have a rep or two with Brady and even got a target, but it went for an incomplete pass. It was important to see him on the field with the entire roster, even for just for one day.

• It looked like Evans got better each day at practice and was at his best on day three. There was a great match-up between him and Carlton Davis III down the sideline where Evans adjusted mid air to catch the ball on his outside shoulder and win the rep. It was just a great battle between two great players. Arians commented that Evans was in really good shape for this time of the year.

#Bucs HC Bruce Arians said that Mike Evans is probably in the best shape for this time of the year that he’s ever seen him in. pic.twitter.com/a4E2bYHeHz

• Another great match-up between top players was Devin White against running back Giovani Bernard. It was speed vs. speed and White came away with a pass breakup on a goal line play. There will surely be more to come from that in training camp.

• Cornerback Ross Cockrell just continues to make plays. He had an interception on Tuesday and another one on Thursday, picking off Gabbert. He was one of the best defensive players out there on the day and continues to push the envelope for the Bucs’ slot corner position.

• Another player with an interception was linebacker Grant Stuard, who also recorded one on Tuesday. This one occurred in the end zone when he cut in front of the running back. He later broke up a play in the corner of the end zone after the receiver initially caught it.

• Antoine Winfield Jr. had two good pass breakups himself. One came while defending his former Minnesota teammate Tyler Johnson in the back of the end zone.

• As previously stated there was a lot of walk through moments, so not a lot of work for the outside linebackers. In fact, they had one drill where they had each player running fly routes down the field and catching passes. You won’t see that on game day, but there’s something funny about watching Shaq Barrett and Jason Pierre-Paul run down the field looking to catch a deep ball. Barrett and Pierre-Paul each made a reception while Joe Tryon had one pass overthrown and another just go off his fingertips.

• Pierre-Paul ended up having a pass breakup on Brady. It was a batted ball at the line of scrimmage.

• Highlighting defensive-line work isn’t easy at this time of the season, but Khalil Davis did have a good rush up the middle. It would have been close to a sack or at least a quarterback pressure in a game.

• It was nice to see O.J. Howard running on his own on the middle field. He joined his teammates as well to watch practices when he wasn’t training. Whitehead also worked out on the left field that was vacant.

• Gabbert had another inconsistent day but Trask got better as practice rolled on. He was slow at first, throwing some incomplete passes, but then he fired off two nice touchdown passes. They went to Tanner Hudson and C.J. Prosise.

#Bucs HC Bruce Arians on how this week was for Kyle Trask and what the differences were. pic.twitter.com/PSwarTFgNV

“It got a lot faster [for him] this week,” Arians said of Trask’s mini-camp performance. “I think he matched the speed. He’s still got a ways to go with seeing all the things our defense shows him, but I’m pleased with where he’s at. He’s still got a long way to go, but he’s got plenty of time to get there.”

Team being extremely cautious of injuries after one was carted off yesterday and SF basically canceling its entire camp because of injuries. I got mixed feelings about the whole thing and views are probably old and outdated so I want comment on it any further. Just glad we made it through without loosing any key contributors. Cheers

That’s why it feels unnecessary to have our OLBs running fly routes and catching passes.. Why risk it?!

So where is Antonio Brown?

Good job Matt. Keep it up.