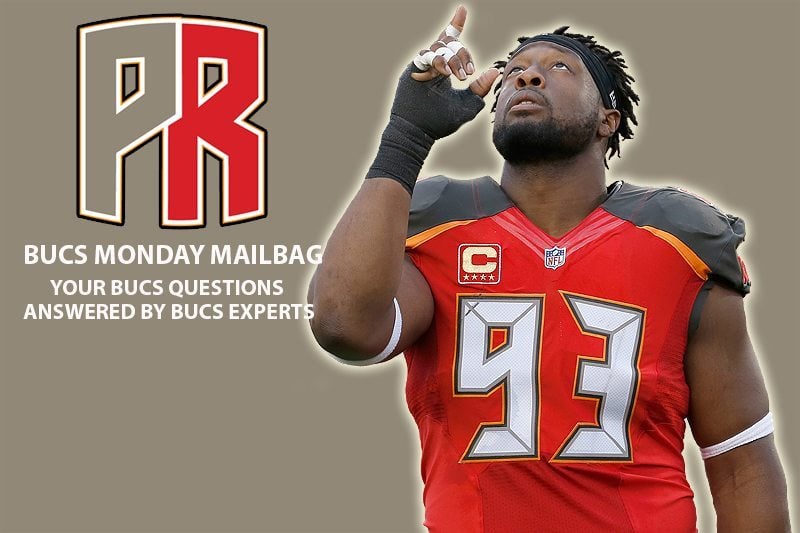 Question: Do you think the Bucs will go after old guys like Aqib Talib and Michael Bennett or do they go after guys younger with more upside? I’m just not sure grabbing 2 guys like Talib and Bennett make sense as they’re probably grabbing one last paycheck.

Answer: I do think there is a chance the Bucs could pursue Bennett if he ends up being released by the Seahawks. He was a well-loved teammate and while there aren’t many former teammates left, guys like Gerald McCoy would most certainly vouch for him. We spoke to McCoy at the Pro Bowl and when asked what type of free agents he wanted to see the Buc pursue, he he was quick to answer.

I think everyone in the organization realizes what a huge mistake it was to let Bennett get away for less than $500,000 annually. The chance to make amends would be something I think the team would like to consider. And let’s face it. This team needs pass rushers. Is Bennett the same player he was when he last played for the Buccaneers? Maybe or maybe not, but he would automatically become the best defensive end on the roster if signed this offseason.

As far as Talib, he too isn’t a free agent, but there are report out of Denver he will be shopped this offseason, due $11 million in 2018. That is a pretty steep price to pay, however, like Bennett, he would be an immediate upgrade on this roster. Sure Talib is a knucklehead at times, but again, this team needs corner help. Imagine having Talib and Grimes lined up opposite each other and a hopefully better Hargreaves in the slot with a year of experienced Justin Evans at safety?

Personally if I am Jason Licht I am on the phone with the Seahawks and the Broncos as soon as it is allowed.

Question: What is the real story behind the move of Monken to full time offensive coordinator? Is Koetter thinking of maybe giving up play-calling after all?

Answer: That is an interesting question, and one we don’t really know the answer to exactly. Speculation is Koetter will remain the playcaller but with more involvement from Monken. Rick Stroud who broke the story, said it is possible Monken does some play-calling in camp and the preseason. I still find it highly unlikely Koetter gives up that duty once the season begins. And again as Stroud mentioned, the very reason Koetter got the job after Lovie Smith was fired was because of his reputation as a playcaller. It definitely was an interesting story to wake up to on Monday and will be interesting to see how it plays out and the reasons behind it.

Question: If you had to put a percentage on the chance the Bucs go 3-4, what would it be?

Answer: If this staff wants to survive past 2018, I would hope they would strongly consider it full-time. As Scott Reynolds pointed out in his latest Fab 5, the odds of turning things around by playing strictly a 4-3 will be difficult. There just aren’t many impact 4-3 defensive ends in this draft.

Reynolds wrote on Friday, “The problem with this year’s draft class is that a lot of the dynamic pass rushers not named Bradley Chubb are undersized guys that will transition better to the NFL as 3-4 outside linebackers than they would as 4-3 defensive ends. Chubb, who had back-to-back years with 10 sacks at North Carolina State, is the clear-cut top defensive end prospect and likely won’t make it to the Bucs, who have the seventh overall pick this year.”

Unless the Bucs get lucky and find some diamonds in the rough, or make a blockbuster trade for a proven edge rusher, expecting things to change in 2018 seems pretty farfetched. A 3-4 scheme change appears to be the most likely path to success and coaches saving their jobs.

Question: I don’t think Mike Smith is to blame. He’s a proven excellent coach. What’s the real deal with the other D coaches? Spill it!

Answer: I too agree Mike Smith is a smart football coach who has forgotten more about football schemes than most of us will ever know. With that said, his defense, regardless of circumstances, failed in 2017. How he survived – and really how most of his staff survived – was really surprising to me. But as the old saying goes, you can’t make chicken salad out of chicken poop. Well you can, but it isn’t going to be very pleasant to swallow. Much like watching the Bucs defense last year. The fact is, without a pass rush the defense is doomed. You could line up two Deion Sanders at cornerback with two Ronnie Lotts at safety, and without consistent pressure they will get beat eventually. NFL quarterbacks are just too good to be able to drop back and not be harassed. Until this team gets more horses, I don’t expect a lot to change.

Waste of money for old players. It has been many years since they wore a Buc uniform. I wouldn’t be praising Mike Smith; after all our defense was just plain bad. Just my opinion.

The problem Horse, is that beggars can’t be choosers. There are 3 phases to a difference- makers career, rookie/earning it phase (when the Bucs gave up on both Bennett/Talib), established big-contract phase and the veteran-downside phase. When you have one blue chip 4-3 pass rusher in the draft and two premium FA’s in the league who are all expected to be drafted or franchised ahead of the Bucs you better be creative and take your shots with guys who are in the veteran phase of their careers in hopes you can get a few productive years out of them, because… Read more »

The Todd Monken story just broke this morning, how are you getting mail on it so fast O.o Also, it’s not as easy to swap from a 4-3 to a 3-4 with a snap of your fingers. The two schemes require different things from the same group of players and I don’t think we really have the guys at the trenches that are able to block shed very well. We got stuffers, but only McCoy can really do the pass rush part of it. Supposedly, this draft is filled with 3-4 OLB pass rushers, but they won’t help with that… Read more »

I agree it is a difficult transition to 3-4 but if you think about it we have a much better LB crew than DE pass rush and like mentioned above this is no draft to load up on D Ends. Our chances of adding an interior D-Lineman is much better. There is only one Grubb available. Now I think it is possible for the Colts to take Saquon or an OL which would be outstanding. additionally I believe what you see is what you get in this years draft. No workout warriors from a D-Line perspective in this years combine.… Read more »

If the team decides to go to more 3-4, there will be a few FA DT’s like Poe, Ellis, Logan, Williams, etc that you’d have to think they’d look at. Hard time seeing Baker return with the way the season ended, but anything is possible. If they move on from him, seems it might be more about his attitude than talent.

Maybe i’m missing something, but I don’t get the 3-4 obsession. The old 2-gap style 3-4 defense is almost extinct as a base defense. And even if it weren’t, it’d make our best defensive lineman’s skillset a total waste if you want him 2-gapping instead of penetrating upfield. Not to mention, we don’t have a proper NT to put in that defense(Chris Baker? Lol). Regardless, teams are running in nickel about half the time, which does take that NT off the field anyway. Yeah, we could run a Wade Phillips style single-gap 3-4 with our current personnel…but at that point,… Read more »

It took our defensive personnel the majority of a lost season to digest Smith’s defense in his first season. Now we are going to a 3-4?

If McCoy wants to play with Talib, or Bennett, how about we let him go so he can pick Denver, or Seattle to play for? What made Talib great in Denver was Von Miller terrorizing Q.B.’s, we don’t have Von. Bennett is one piece of a very talented defense, he isn’t the sole reason they are so good. Both players are complete turds, the fan base here wouldn’t stomach either of them. Let’s spend our money on more of a long term fix. Stop trying to relive the past, we need a future. As for Monken, let him call the… Read more »

And when you tell us who this long term fix is that the team can commit money to this offseason I’m all ears.

Actually like the idea of adding Talib and Bennett if the team feels they can still produce. Couple them with another DT, CB and/or S in FA and then double up on those spots in the draft and hopefully you’ve addressed the near and long term needs at those spots. I would send a staff member instead of a cab to get Talib at the airport though. :)

aa staff and a limo no cabbie!!!