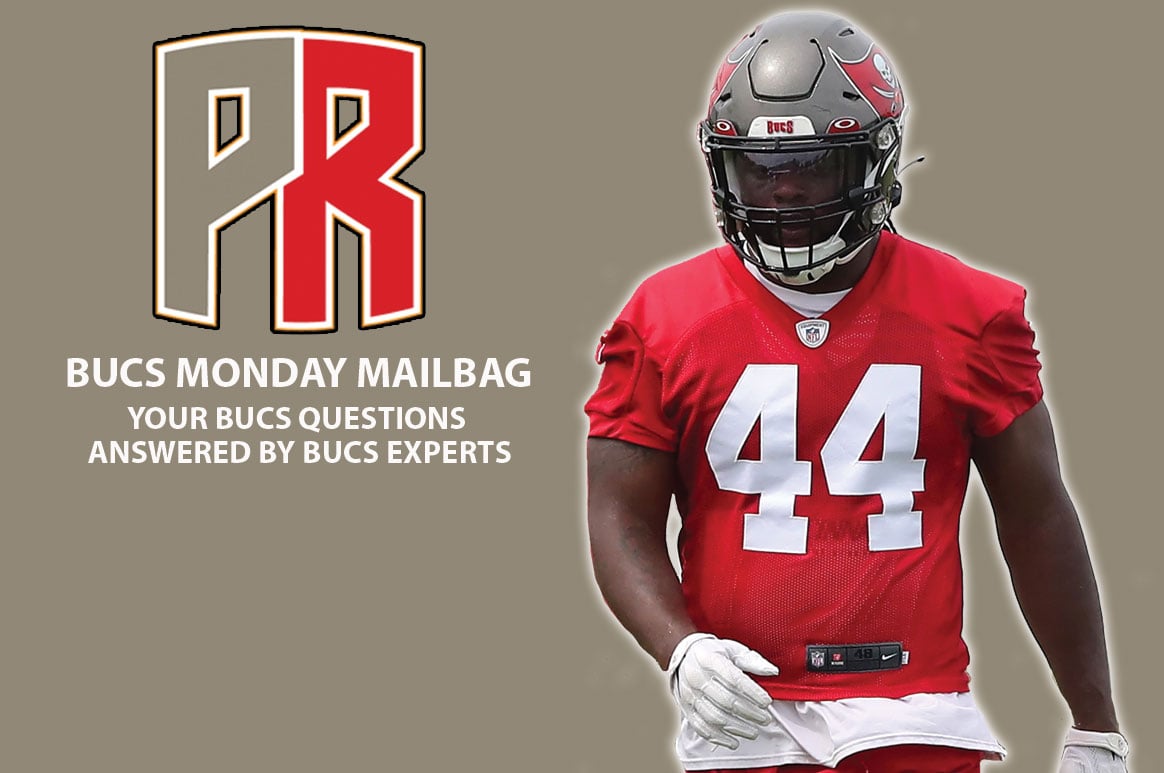 QUESTION: Who are the players to watch during the preseason, which is the perfect place to uncover hidden breakout players?

ANSWER: We’ll have a better idea in training camp as to which Bucs could have a breakout preseason. It’s different when the pads come on. There have been plenty of players that have had some offseason buzz during the OTAs and mini-camps fizzle when it gets physical. Former defensive end Patrick Chukwurah (2007), former receiver Kenny Bell (2015) and current receiver Jaelon Darden (last year) come to mind.

I wrote about six possible Bucs training camp sleepers in last week’s SR’s Fab 5. Darden wasn’t included, but he had a solid preseason. The player that I’m anxious to see when the pads come on and the preseason games roll around is undrafted receiver Deven Thompkins. That was a player who head coach Todd Bowles singled out as the player he’s looking forward to seeing in camp. Thompkins was the second-leading receiver in college football last year with 102 catches for 1,704 yards and 10 TDs at Utah State.

At 5-foot-7, 167 pounds, he’s the smallest player on the Bucs roster. He also might be the fastest and the quickest. Thompkins ran a 4.35 40-time at his pro day. Darden ran a 4.46 by comparison. We’ll see if Thompkins can unseat Darden as the team’s return specialist and win a reserve receiver spot in the process.

Another one is edge rusher Elijah Ponder. He spent last year on the practice squad and has totally remade his body. Ponder played 3-technique defensive tackle at the University of Cincinnati at 275 pounds. Now, he’s trying to make the team as a 240-pound outside linebacker. The Bucs like his physicality and his potential. He’s one to keep an eye in camp as he battles Cam Gill and others for a roster spot.

QUESTION: Do the Bucs add one more pass rusher?

I think the Bucs will wait until the start of the season to consider adding another veteran pass rusher. The Bucs have some young, talented pass rushers who they want to see in camp and the preseason first. Two-time Pro Bowler Shaq Barrett and Joe Tryon-Shoyinka will start at outside linebacker. Anthony Nelson made strides last year and is entering a contract year. He’s the first edge rusher off the bench. 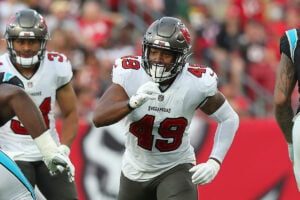 As I mentioned above, Cam Gill will compete will practice squader Elijah Ponder for the fourth OLB spot. Ponder is one of my Bucs training camp sleepers, and I featured him in last week’s SR’s Fab 5. Gill, who is a valuable contributor on special teams, made some strides last year as a situational pass rusher and finished with a career-high 1.5 sacks.

Former Bucs outside linebacker Carl Nassib, Justin Houston, Carlos Dunlap and Anthony Barr are some of the better veteran free agents who are still available. Bucs general manager Jason Licht has waited until after the preseason to bolster the pass rush before. He claimed Jacquies Smith off waivers right before the start of the season in 2014. Licht did the same thing in 2018, claiming Nassib off waivers in early September.

If Gill and/or Ponder don’t emerge as viable threats to consistently pressure the quarterback this August, then I could see Tampa Bay adding another pass rusher. Rookies Andre Anthony, the team’s seventh-round pick, JoJo Ozougwu and Jordan Young are also in the mix. But Gill and Ponder know the defense better and have the edge heading into camp.

QUESTION: I have a question about “pressure” statistics for NFL teams. We know what constitutes a sack, but how is a pressure determined? Is it simply in the eye of the beholder, or is there a statistical measure (such as one yard from the QB when the pass is thrown?) And who makes the decision?

ANSWER: It is a completely subjective statistic. And not all pressures are created equal. Some pressures result in incompletions. Yet, it is possible to pressure the QB and he still completes the pass. Some analytics folks think pressures are the end-all, be-all stat and even hold them in higher regard than sacks. Pressures are important, as they can lead to incompletion or even an interception. But again, a quarterback can be pressured and still complete a pass or even throw a touchdown.

Ndamukong Suh pressured Matthew Stafford on his 44-yard strike to Cooper Kupp in the final seconds of the NFC Divisional Playoffs. But Stafford still made the play.

A sack is not subjective. It’s definitive. A quarterback cannot complete a pass when sacked. And sometimes, sacks can result in fumbles. Sacks on third downs count more because they often lead to punts, which change possession. For that reason, I believe sacks trump pressures.

In terms of how pressures are measured, well, that varies. Pro Football Reference defines pressures as “hurries + knockdowns + sack plays.” Just like a tackle for loss is also counted as a tackle, PFR includes sacks as pressures.

Pro Football Focus has this to say about how it measures pressures: “Dealing with pressure is a huge part of playing quarterback, especially with the pass-rushers in the NFL and college nowadays and the pass-happy nature of the league. Under pressure passing is any time the quarterback is disturbed from his normal throwing motion from set up to release, or anytime a pressure is registered on a given passing play. Much like deep passing statistics, we then develop individual statistics off of just pressured passing. In addition to the usual suspects of yards, completions, attempts, passer rating and adjusted completion percentage, we also have pressure percentage (the amount of times a QB is pressured compared to total dropbacks) and sack percentage (the amount of time when under pressure a QB is sacked).”

QUESTION: In a worst case scenario if Rob Gronkowski doesn’t return what would the tight end room look like? Is there any tight end the Bucs can trade for or sign from the free agent market?

ANSWER: Well, Tampa Bay’s tight end room without Rob Gronkowski would look like one aging veteran and a bunch of rookies. Cam Brate will turn 31 in July and his skills are diminishing. The Bucs drafted a pair of tight ends in Cade Otton and Ko Kieft, and they signed a pair of undrafted free agents in Ben Beise and J.J. Howland. Practice squader Codey McElroy is technically considered a veteran, but he hardly has any NFL game experience. The 29-year old is more like a rookie than a veteran. 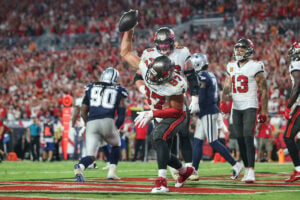 I still remain convinced that Gronkowski will re-sign with the Bucs in July – likely right before training camp. If he really was going to retire this offseason, he would have informed Tom Brady and general manager Jason Licht so the Bucs could prepare. Instead, the Bucs didn’t sign any veteran tight ends and only spent a fourth-round draft pick on Otton. If Gronk wasn’t going to return, Tampa Bay would have been much more aggressive in finding a veteran replacement.

There are still some veteran tight ends who could be signed if Gronk doesn’t return. Jimmy Graham, Kyle Rudolph and Jared Cook are some of the bigger names. They are all over the age of 30 and not the weapons they were in their prime, though. Eric Ebron is also available and is 29, but his play really went downhill last year in Pittsburgh.

QUESTION: If the Saints can get new black helmets what supply chain issues are holding up the Bucs throwback unis? Limited orange thread?

ANSWER: That’s a good question. I was wondering the same thing when I saw the Saints unveil their black helmets on social media last week. I think the difference is that getting 53 black helmets is different from getting 53 orange and white throwback uniforms, which comprise of jerseys and pants. Different materials are used to make football uniforms as opposed to the helmets.

There are supply chain issues obviously affecting different sectors. The baby formula shortage is certainly the more pressing and important one across the country. But apparently the Bucs throwback uniforms will be ready for the 2023 season. Perhaps that will be the lure to get Tom Brady to come back and play one more season in Tampa Bay.

Hope the supply chain issues remain-I have PTSD over seeing the Bucs back in the creamsicles adorned with feathered pirate Pete. Ugh….

I would distinguish Pressures and Sacks like this: – Sack better play – Pressures: better for predictions A pressure usually shows that you have beaten your blocker. If you do this often, sacks should follow sooner or later. A sack or not sack on the other hand can be just bad luck or luck. The QB throws the ball quickly or a teammate is on him earlier (or the QB runs into him because he avoids you). Ultimately, good players are ahead in both statistics. It only gets interesting when the rankings of the stats diverge and here a prediction… Read more »

Except that a sack, other than a strip sack, cannot result in a turnover while pressures routinely result in interceptions which are way more valuable than simply losing yards on a play (just ask every team that played Jameis Winston!). Pressures also result in incomplete passes, while sacks by definition cannot.

Yes turnover are the best play. But does pressures routinely end in interceptions? It can, but QBs throw interceptions also without pressure (Winston). It’s like a sack can end in a fumble.
And if I should pick a Sack or incomplete pass, i will always choose the sack

I disagree with Scott’s analysis here. A sack actually CAN be subjective. Anyone who watched in real time as I did, or in a later replay, Michael Strahan get his sack of Brett Favre that set the all time single season sack record, it was a scam and a sham. Favre saw Strahan approaching in the pocket and literally fell down and let Strahan touch him. Then after the whistle Favre got up and congratulated Strahan for his “record” that really should not have been a record, but it still fit the league’s definition of a sack. There was even… Read more »

Just like Scott eluded to about Gronk, i have a hunch he is correct. If Gronk’s answer was leaning towards no, I think he would have let his ol’ buddy Tom know. He wouldn’t want to sabotage his chance for ring 8, knowing how important the “next one” is. Also, if you saw the clip online of Gronk at the barbershop right when Tom un-retired, someone asked him is he coming back too. He said “I’m gonna let Tom worry about it and sweat it out” (forgive me, i don’t remember the exact words). I think that was honest. He’ll… Read more »

I think without any question, Gronk wants to go into the Hall Of Fame on the same day as Brady. Now that would be a beautiful ending to a Career, Played together, retired together, HOF together.