Bucs Monday Mailbag: How Much Blame Should Coaches Get?

Home » Articles » Bucs Monday Mailbag: How Much Blame Should Coaches Get? Bucs Monday Mailbag: How Much Blame Should Coaches Get?

Home » Articles » Bucs Monday Mailbag: How Much Blame Should Coaches Get?

QUESTION: Teams like New England field defenses that confuse opposing quarterbacks and offenses that create easy scoring opportunities. The Bucs don’t do either of these things, relying instead on an overwhelming talent advantage. Is it time to blame the coaches?

ANSWER: There is no doubt that poor coaching has had something to do with Tampa Bay’s back-to-back losses at New Orleans and at Washington. I’m a big believer in football being a players’ game – because coaches don’t commit penalties or turnovers or score touchdowns – but coaching matters. Bad coaches can lose games just as easily as good coaches can win them due to play-calling and putting their players in the best – or worst – position to win games. 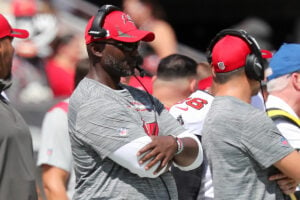 Defensive coordinator Todd Bowles repeatedly said he needed to call better plays at Washington, especially as his defense gave up a 19-play, 80-yard drive that consumed over 10 minutes off the clock. Bowles has been hamstrung a bit by the injuries in the secondary, which has forced him to play more soft zone defense and far less man-to-man than he prefers. Yet when asked about it, he has said that he hasn’t been limited with his play-calling in that regards. I don’t buy it. That’s coach-speak.

Offensive coordinator Byron Leftwich has to incorporate more play-action plays in the offensive game plan, too. Both coordinators need to step it up with better, more timely play calls down the stretch. It is possible that the coaches might be relying too much on the talent rather than the scheme to try to win games. Hopefully last week’s embarrassing, 29-19 loss at Washington was a wake-up call for everyone involved.

QUESTION: Has Bruce Arians lost control of this team, and is a coaching change a possibility with a quick playoff exit?

ANSWER: No, Bruce Arians has not lost control over the Buccaneers. The Bucs are 6-3 heading into the Giants game on Monday Night Football. A win would improve Tampa Bay’s record to 7-3 on the season, which would be the second-best record in the NFC, and the Bucs would be 5-0 at home. The key, of course, is beating the Giants. There is a big difference between the Bucs being 7-3 as opposed to 6-4. If the Giants pull off the road upset, then sound the alarm bells. But I don’t think that’s going to happen.

Remember, Tampa Bay lost two straight home games last year against the Los Angeles Rams and Kansas City – both by a score of 27-24. In fact, those losses were part of a stretch in November where the team lost three out of four games, including getting destroyed at home by New Orleans, 38-3. Yet the Bucs rallied after the bye week and won eight straight games.

Arians has a 24-17 record in two-and-a-half seasons in Tampa Bay. His .585 winning percentage is the best of any Bucs coach, including Tony Dungy (.563) and Jon Gruden (.509). He just won the Super Bowl last year. So if the Bucs do make a quick playoff exit, I certainly think he gets a pass and returns in 2022.

QUESTION: The Bucs aren’t going to make the same mistake on Monday Night Football as last week and think they can just show up and win, right?

ANSWER: Let’s hope not. I do think Tampa Bay strolled into Washington feeling overconfident after a very good week of practice and thought it could show up and win. Washington was 2-6 and I think the Bucs saw the record and had some confidence knowing that they beat the Football Team there in the playoffs last year. The only problem was those two quick Tampa Bay turnovers in the first quarter gave Washington a big shot of confidence, too.

There is a chance that the Bucs could show up for Monday’s game against the Giants overconfident, too. After all, Tampa Bay is undefeated at home this year and is averaging 40.5 points per game at Raymond James Stadium. That’s a far cry from the team’s production on the road, which is just under 24 points per game. Tampa Bay’s defense has played exceptionally well at home, too. After surrendering 29 points to Dallas in the season opener and 25 to Atlanta in Week 2, the Bucs held Miami to 17 points and Chicago to just three points. All of those stats are reasons why the Bucs could be overconfident.

But look no further than to the last two games against the Giants. Daniel Jones got a 32-31, upset win at Tampa Bay in his first game as an NFL starting quarterback against Todd Bowles’ defense in 2019. And the Giants outplayed the Bucs until the fourth quarter in last year’s 25-23 win at New York on Monday Night Football.

I’m sure that, coupled with the fact that the Bucs lost last week to a 2-6 team and that there have been upsets aplenty around the league for the last three weeks, has Bruce Arians drilling it into his players’ heads that they need to be ready to play on Monday night. It’s not just “any given Sunday” – it’s “any given Monday, too.”

QUESTION: Why are the Bucs historically so bad in prime time?

ANSWER: How other Tampa Bay teams have fared in prime time games has nothing to do with how this year’s Buccaneers are doing in nationally televised games. Last year the Bucs struggled in prime time with home losses to the Saints and Rams, a bad road loss at Chicago and a narrow road win at New York.

However this year, the Bucs are 3-0 in prime time games, although it’s been three close wins. Tampa Bay beat Dallas, 31-29, on Thursday Night Football to open the season. In Week 4, the Bucs traveled to New England and barely beat the Patriots, 19-17. Tampa Bay had a 28-7 lead at Philadelphia before the Eagles stormed back to make the final score a 28-22 win for the Bucs.

At the end of the day, all wins count the same, just like all losses count the same. Tampa Bay’s 45-20 win at Las Vegas in 2020 counted just as much as the team’s 25-23 win at New York against the Giants. It’s “survive and advance” in the NFL, especially this year where parity is in full effect.

I could write a whole column on the coaches and players that are no longer in Tampa Bay and why those Bucs teams of yesteryear didn’t win in prime time. But that would do nothing other than taking a wasted trip down memory lane.

The fact is that the Bucs are finding ways to win in prime time this year, and with a win over the Giants they would be 4-0 under the lights in 2021. That would be by far the best record ever in prime time for the Bucs. It’s not so much about style points as it is about scoring enough points to get the win in prime time.

Defense has to show up or it won’t matter what the offense does or doesn’t do. If defense allows opposing team to counter with a score after we score then it is going to be long night. Offense can’t wait till second half to have a sense of urgency. Come out petal to the metal and never let the foot off the gas. Please call a steady and agressive game tonight BL!

I respect the knowledge of football X’s and O’s of both or our coordinators. I just question the philosophy at times. Case in point: Last week, we score, we’re down by 4 with about 11 minutes to go in the fourth quarter. We did not stop them on a single drive in the first half. They start on a long, slow methodical drive… Here’s where the philosophy to play it safe – play not to lose kills.. If I’m the D coordinator (philosophically speaking), after 8, 9, 10 plays and they keep getting first downs, and the clock has been… Read more »

“Playing it safe” is nowhere in Bowles vocabulary! Our defensive scheme is the most aggressive in the entire league blitzing on better than 50% every play. It’s why these young CB’s are playing loose, off ball coverage 10-15yds back. I’m not sure if I could disagree with you more!

Yes, of course, let’s fire the coaches. The Buccaneers have only won 12 of their last 15 games. So many posters here have bought the cool aid that our roster is head and shoulders above every other team. That’s just not the case when you have two all pro players on offense out with injuries and three or four defensive backs out as well. The line between the top and lesser teams is not that great. How great did Dallas look yesterday with their two top receivers ou?. Answer: The highest scoring team in the league scored nine points. The… Read more »

Count me amongst the “cool aid crowd” because I will take our roster over the remaining teams in contention for #1 playoff seed. Dallas, GB, Rams, AZ nope TB & TB all the Way!

I cannot believe the effing questions that Reyolds is posting and stupid fans are posing. A coaching change? Who is to blame, coaches or players? Should be be firing our coaches today, or wait for a few weeks more? WTF WTF WTF and WTF cubed!!!!! In what effing universe does a Bucs team that just won a Super Bowl and is 1 and 1/2 games in the lead in the NFC South halfway through the season have anybody to “blame”? Instead of, you know, trying to figure out who to congratulate? What effing morons!!! Writers and commenters all. In case… Read more »