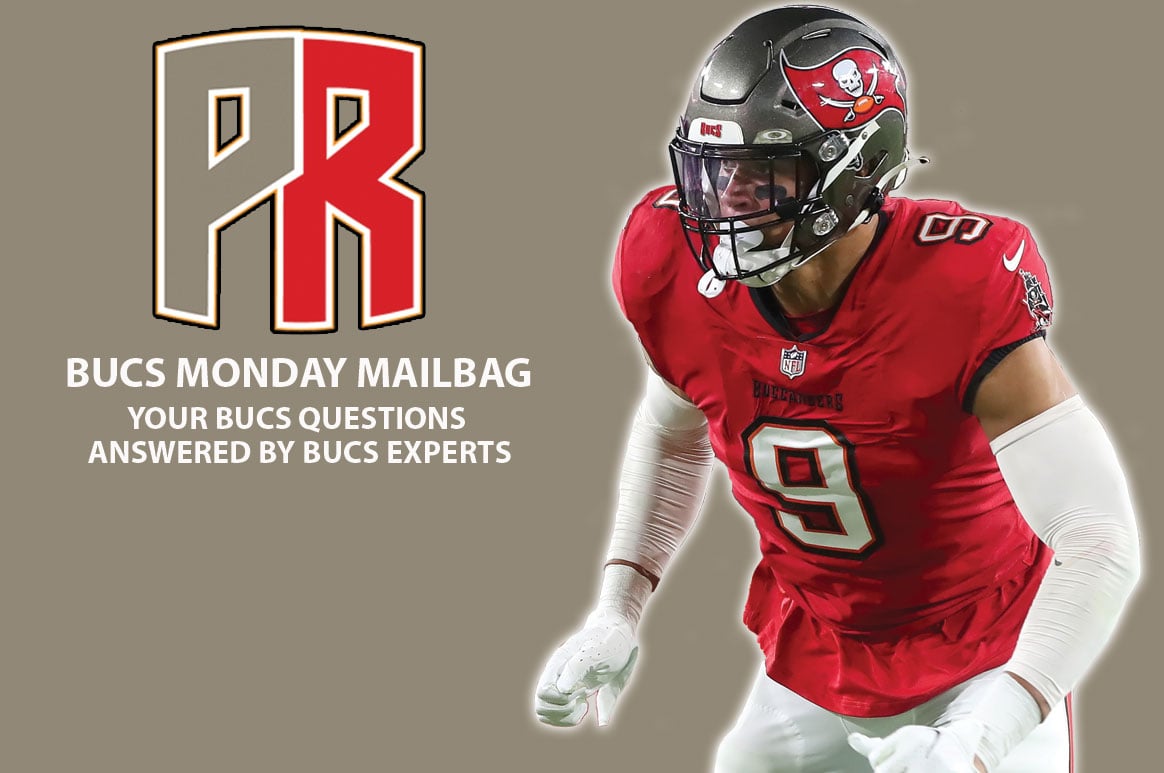 QUESTION: Todd Bowles will always be aggressive, but if our four-man rush is better will we blitz less? Joe Tryon-Shoyinka should be an upgrade over a battered Jason Pierre-Paul, and Akiem Hicks will be a game-changer next to Vita Vea if healthy.

ANSWER: Todd Bowles believes in his blitz-heavy scheme and that won’t change. The Bucs blitzed on a league-high 40.8% of their snaps and had a pressure rate of 28.6% in 2021. Having said that, Bowles will adjust his game plan according to the opponent that Tampa Bay faces on a weekly basis. In Super Bowl LV at the conclusion of the 2020 season, Bowles wisely didn’t blitz Kansas City QB Patrick Mahomes. He learned a lesson from a 27-24 loss in Week 12 that year, when Mahomes threw for a pair of touchdowns and over 200 yards in the first quarter of that defeat. Instead, he relied on the front four to apply pressure. Ndamukong Suh had 1.5 sacks and Shaquil Barrett had a sack and multiple pressures in the game. Some felt that Barrett should have been the Super Bowl MVP due to how much pressure he applied on Mahomes.

If the Bucs’ front four of Barrett, Joe Tryon-Shoyinka, Vita Vea and Logan Hall or Akiem Hicks in nickel defense can win on a regular basis, that might prompt Bowles to blitz a bit less frequently. The Bucs are counting on Tryon-Shoyinka to make a big leap in 2022 in his first year as a full-time starter. And Tampa Bay is also counting on another double-digit sack season from Barrett, who made his second Pro Bowl last year.

But the Bucs will always be a blitzing team as long as Bowles is calling the plays. Tampa Bay has recorded 47 sacks, 48 sacks and 47 sacks in the three seasons Bowles has been leading the defense. That’s put the Bucs in the top five when it comes to sacks each year. The results speak for themselves.

QUESTION: How’s the left guard battle going? Who’s looking to be the main returner? Is Rachaad White worth the hype?

ANSWER: Three good questions, yet three questions that we don’t have the final answer to right now. At left guard, veteran Aaron Stinnie took the majority of starting reps in the OTAs and mini-camp. Robert Hainsey and rookie Luke Goedeke got some reps at left guard too. Nick Leverett has been used primarily as a backup at right guard behind Shaq Mason and at center behind Ryan Jensen and Hainsey. It seems like the job is Stinnie’s to lose. I think the Bucs would feel more comfortable with a veteran blocking for Tom Brady in what could be his final year in Tampa Bay. The Bucs have started a rookie offensive lineman before in right tackle Tristan Wirfs in 2020. But there is a talent difference between Wirfs, who was selected No. 13 overall, and Goedeke, who was a mid-second-round pick. There is a chance that Goedeke could eventually win the starting job at some point this season, but in Week 1 against Dallas, I would bet on Stinnie right now.

As for the main return specialist, Jaelon Darden is the leader in the clubhouse right now. But I would keep an eye on undrafted free agent Deven Thompkins. He has experience doing both at Utah State. Thompkins averaged 24.9 yards per kick return and 14.3 yards per punt return with one touchdown for the Aggies. Thompkins showed off his 4.35 speed in OTAs and the mini-camp, and is absolutely electric. He’s faster than Darden, who ran a 4.46 coming out of North Texas. Training camp and the preseason will decide who wins the job.

Is Rachaad White worth the hype? We’ll find out in camp and the preseason when the pads come on. White rushed for 1,000 yards and 15 touchdowns last year at Arizona State. But it was his ability in the passing game that attracted the Bucs to him. White averaged over 10 yards per catch on 43 receptions last year. He has great, natural hands and sneaky speed. The coaches and scouts raved about his offseason. I suspect White will wind up as Leonard Fournette’s primary backup, beating out Ke’Shawn Vaughn for those duties.

QUESTION: What’s going to be going down with Ndamukong Suh and Jason Pierre-Paul? Gotta find a way to keep them in a Bucs uniform!

ANSWER: That’s not going to happen. The Bucs have already moved on from Jason Pierre-Paul. They clearest evidence of that is the fact that Tampa Bay has already given JPP’s No. 90 jersey to rookie defensive tackle Logan Hall. Pierre-Paul is 33 and his body is breaking down from years of punishment. JPP missed five games last year and was largely ineffective in most others after suffering a serious shoulder injury in Week 1.

As for Ndamukong Suh, the Bucs have now drafted Logan Hall with the No. 33 overall pick and signed veterans Akiem Hicks and Deadrin Senat. That’s three new defensive tackles in Tampa Bay. The signing of Hicks pretty much closed the door on Suh’s return. Suh had a great game against the Rams in the playoffs. But that would turn out to be his last game in red and pewter.

Pro Football Focus gave Suh a 49.4 overall grade last year. Hicks earned a 72.3 overall grade from PFF by comparison. While Suh has racked up back-to-back seasons with six sacks, the team believes a younger, more athletic defensive tackle would have eight to 12 sacks given the same pass rush opportunities that Suh had. The Bucs believe the 35-year old Suh has lost a step as a pass rusher and as a run defender.

QUESTION: Do you guys have to offer the players anything to come on the Pewter Report Podcast? Also how does one become a Hall of Fame voter and can the current voter be replaced?

ANSWER: No, Pewter Report has never paid a player – or any guest – to come on the Pewter Report Podcast. In full disclosure, CELSIUS paid Scotty Miller to appear on the podcast in 2021 because Miller is a CELSIUS-sponsored athlete. Miller was paid to endorse CELSIUS on the show in addition to talking Bucs football with us. As you might know, CELISUS energy drinks is the title sponsor of the Pewter Report Podcasts.

As for the Pro Football Hall of Fame, Ira Kaufman is the current Hall of Fame voter for the Buccaneers. For decades, the voter has been a primary beat writer or columnist for a major local newspaper. However, the rise of digital media and the decline – and elimination – of newspapers has changed the landscape. Kaufman used to work for the now-defunct Tampa Tribune.

When he retires from sports writing and gives up his post as the Hall of Fame voter, I suspect it will go to the Tampa Bay Times’ Rick Stroud. He’s been on the Bucs beat a few years longer than I have. This is my 27th year, and I think Stroud has been doing it for 30 years or more. I’ve never campaigned or petitioned for the job. But I do feel like I would be good at it with my intimate knowledge of the Bucs and experience covering the team.
Maybe the Hall of Fame torch will be passed from Kaufman to Stroud to myself one day. Who knows? I have never been one to want to win awards or receive titles. I’ve never entered my writing in any sports writing contest. The only accomplishment I care about is the continued growth of PewterReport.com and writing informative and entertaining articles and columns for you – the diehard Bucs fan.
Previous
Next

It’s sad to see the Bucs move on from JPP and Suh. Both have been Warrior Leaders for this team, and will always have a special place in Buc’s history.
It was also sad to move on from Sapp and Brooks decades ago.
I suspect Suh gets a gold jacket, but maybe not JPP.

Well Scott I hope one day you get that hall of fame vote torch passed down because you are an excellent writer. I have always enjoyed reading your material but every now and then you lose it like putting Brady on your Bucs Mt Rushmore. Still SMH🤦🏾‍♂️

Coach Bowles has his preferred defensive schemes which emphasizes blitzing, but that does not necessarily mean he won’t reduce the number of blitzes he calls if the pass rush improves. He can blitz a lot, and still blitz less (which is not that hard to do when you have blitzed more often than any other team the last few years). Licht and the coaches repeatedly said this offseason that one of their primary goals this year was to get faster on the D line. Well, they did. That doesn’t necessarily mean the pass rush will get more effective, but it… Read more »

Last edited 16 days ago by Naplesfan

Great full disclosure Scott. Unfortunately, I doubt you will ever get the HOF nod because of your biasness for the Bucs which, I have no problem with. It is a shame Kaufmann ended up where he did since I personally feel it soils his reputation. I have to agree with you on the rest of your answers, especially Suh and JPP, plus the starting RG. Great trade by Licht to get JPP but that shoulder injury probably knocked one or two years off his career. Also ridding the team of a tender passive McCoy for a dawg with a bite… Read more »

I was so Happy to trade out McCoy for Suh, I was happy with his performance to help us win our 2nd Ring. In the end though, Suh benefitted greatly from playing next to Vea while he finally coming into his own, and I have a feeling Hicks and Hall will prove to benefit even more and end up with better production because of it.

Also, JPP was the Heart and Sole of our DLine when he was healthy, he was the one scheming with Barrett on how to attack. Losing him will be a big loss, but in his condition and penchant for injuries this late in his career, it is just simply time to move on and out that money to better use. I know JTS still has a lot to learn but I saw him mighty close to many sacks last year and I hope he continues to move forward. In the end you can never guarantee that players will progress but… Read more »

I think predictability can go both ways and the fact we are blitzing is predictable to an offense. I’d like to see us keep the offense off balance by not blitzing as much as they expect.