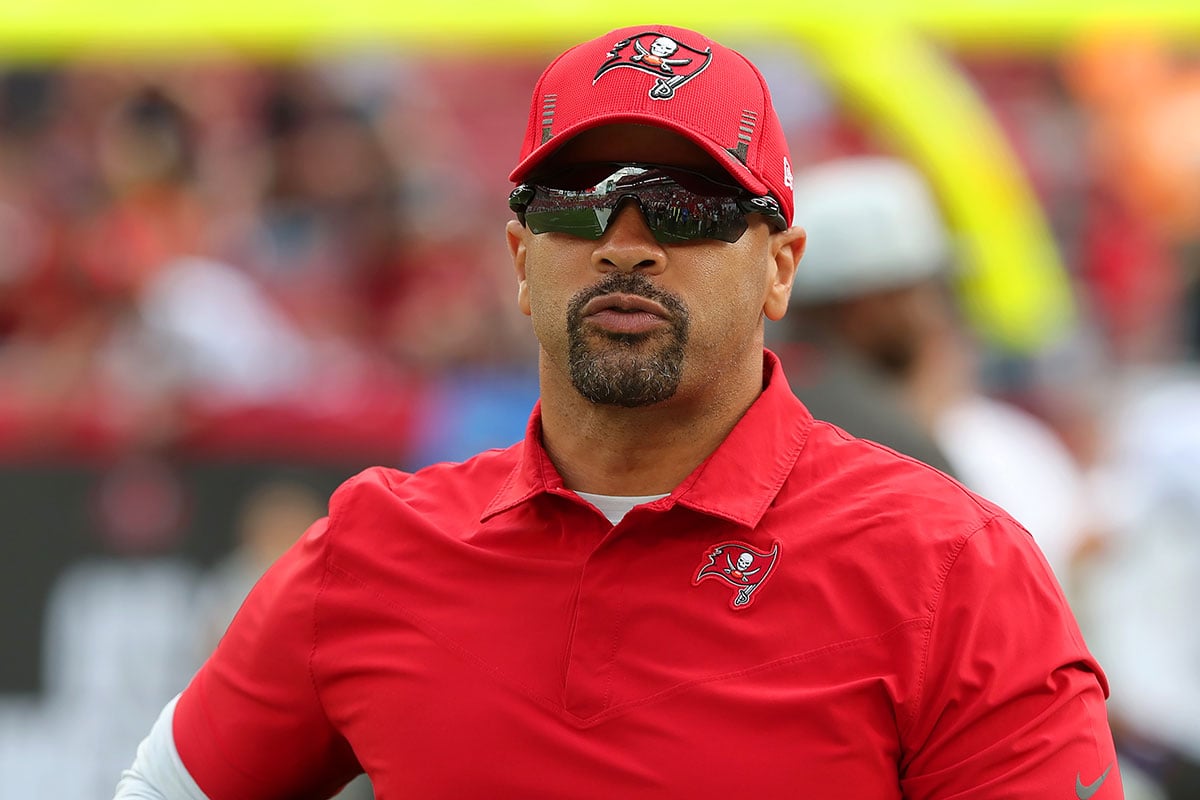 Rodgers served as Bowles’ defensive coordinator in New York when he was the Jets from 2015-18. After Bowles was fired after four years in New York, he rejoined Bruce Arians’ staff in 2019 – this time in Tampa Bay. Bowles hired Rodgers to be the Bucs’ defensive line coach and he has served in that capacity for the past three seasons. In 2020, Rodgers helped the Bucs win Super Bowl LV and was named the league’s Defensive Line Coach of the Year.

Rodgers has worked with Bowles for 14 seasons. That working relationship began in Dallas on the Cowboys staff from 2005-07. Rodgers was the defensive line coach and Bowles was the secondary coach. The two were on the same staff again in Miami from 2008. Bowles was the assistant head coach and secondary coach, while Rodgers continued to coach the D-line.

“I think his next step is being a coordinator,” Arians said about Foote. “Having worked with the inside ‘backers in Arizona and the outside ‘backers here, he has just continued to grow. I thought both of his guys should have been in the Pro Bowl – Shaq [Barrett] and JPP (Jason Pierre-Paul). Larry is a heck of a football [coach] – great communicator, a very, very bright young man. He will be a coordinator and hopefully someday a head coach.”

The 40-year old Foote was a linebacker at Michigan with Bucs quarterback Tom Brady before being selected as a fourth round pick of the 2002 draft by Pittsburgh. Foote had an 11-year career with the Steelers where he got to know Arians, who was Pittsburgh’s receivers coach (2004-06) and then the team’s offensive coordinator starting in 2007. The fiery Foote and Arians used to get into it in practice back in Pittsburgh.

“Oh yeah, he has an edge about him,” Arians said. “Nobody used to talk more [expletive] than me. And it was usually him on defense in Pittsburgh giving it [right back to me].”

Foote made such an impression on Arians that he recruited him to Arizona to play linebacker in 2014, which was his final year as an NFL player. When Foote decided to retire in 2015, Arians immediately offered him an assistant coaching position, and the former linebacker coached the same position group for the Cardinals through the 2018 season.

“He was an extremely smart player,” Arians said. “Larry could really diagnose things well. He played balls to the wall – he was all out all the time. He was a little bit undersized, but you never knew it the way he hit. Larry had great, great confidence about himself. He’s the first guy I ever hired from being a player straight to a full-time coach. Usually I make them sit out a year or intern or be an assistant to a coach. He ended up coaching the guys he played with the previous year. It was an easy transition for him.”

Foote Made His Mark Early In Tampa Bay

Foote loved the idea of reuniting with Arians in Tampa Bay in 2019 and joined the staff as the team’s outside linebackers coach, where he helped Shaquil Barrett lead the league with 19.5 sacks, which set a franchise record. “It’s awesome – me and B.A. hit it off way back in the Pittsburgh days when he was just a wide receivers coach,” Foote said. “He was always a fiery guy and we always clicked off the field. When he became a head coach, my last year I came out there and played for him in Arizona. That’s where I got to meet Todd Bowles and we won a lot of games. B.A. always knew I was an ‘above the neck’ type of guy when I was playing. As a player, I thought I was the best athlete out there, but Coach told me I stayed in this league long because I could think out there on the field.

“When Bowles left, Mike Caldwell went with him and B.A. said, ‘No, you’re coaching my linebackers. I’m not letting you retire and go home.’ I just slid right in there. Some of my former teammates I played with – Hines Ward, even Joey Porter – that’s not the norm. Former players just sliding in and getting your own room – that’s not the norm. It just happened to happen that way for me, and I thank God for it. My next step, I would love to be a coordinator in this league and to bring all my experience to the game. I’ve been around a lot of great coaches, so I’m just going to emulate what they taught me.”

Arians thought so much of Foote that when he hired Jen Welter to be the first female assistant coach in NFL history, he paired her with him in the linebackers room.

“He was also the guy that when I hired the first female, I put her with him – with the inside linebackers – because I knew he could handle it,” Arians said. “He did a great, great job with Jen Welter. Foote was coaching inside ‘backers, and of course he played inside ‘backer, and we moved him to outside ‘backers here. He’s a coordinator-in-waiting.”

Foote’s wait is over.

How do you have “co” defensive coordinators. Someone gets to call the plays. Who is it?

Everyone gets a trophy!! I wish they’d just name one.. maybe it’s an open tryout?..

I agree with the apparently unanimous majority. How can you have TWO defensive coordinators? Name one! Foote seems to have all the requisite credentials, so just name him to the position and be done with it.

Imagine waiting a long time to get a coordinator gig, then when you do, you find out you will have to share it. Are they sharing the salary as well, or will the Bucs be paying for two DC’s?

One on the field calling plays, one in the booth. This is to get Foote a little experience. All a part of Arians ongoing mentoring thing.

I would love to see the pillars of the 2002 Bucs come and coach up the defense during training camp. It would be great if Derrick Brooks could come and mentor Devin White. It would be awesome to see Ronde Barber working with Jamel Dean and SMB. I would love to see Simeon Rice working with JTS. And maybe even have Warren Sapp working with a rookie 3-technique. Maybe the 2022 season can be the mirror image of the 2002 season. In 2002 it was a fiery offensive coach coming in and making the offense just good enough for a… Read more »

Good luck to both of these guys. I hope they are able to improve our defense. Go Bucs!

Last edited 3 months ago by pinkstob

The brain dead continue to emote stupidly on these comment pages about stuff they know not a damned thing about (how many of the whiners here ever so much as coached Pop Warner, let alone an NFL championship team? besides none, of course). Talking shit about the coaches of Texans or the Panthers is one thing … mouthing off about our Bucs coaches and the decisions they make is in another universe of stupid.

Or…….you could just have enough tact and class to say you disagree with “Person 1” for reasons “A and B” and you disagree with “Person 2” for reasons “X and Y”. But no, you just continue to insult people en masse as if that somehow makes you appear smarter and more experienced. Here is a clue for you Naplesfan. Jr. High School was over a LONG time ago, your bullying tactics no longer play well. The amateur psychologist in me says you are probably overweight, balding and out of shape and still reveling in your days of picking on people… Read more »

Funny! I always thought it would be a hoot to get one of those police sketch artists to draw what we perceive people we’ve never met look like. Me, I’m very handsome. LOL!