Bucs OLB In A Boot At Thursday Practice

Home » Articles » Bucs OLB In A Boot At Thursday Practice 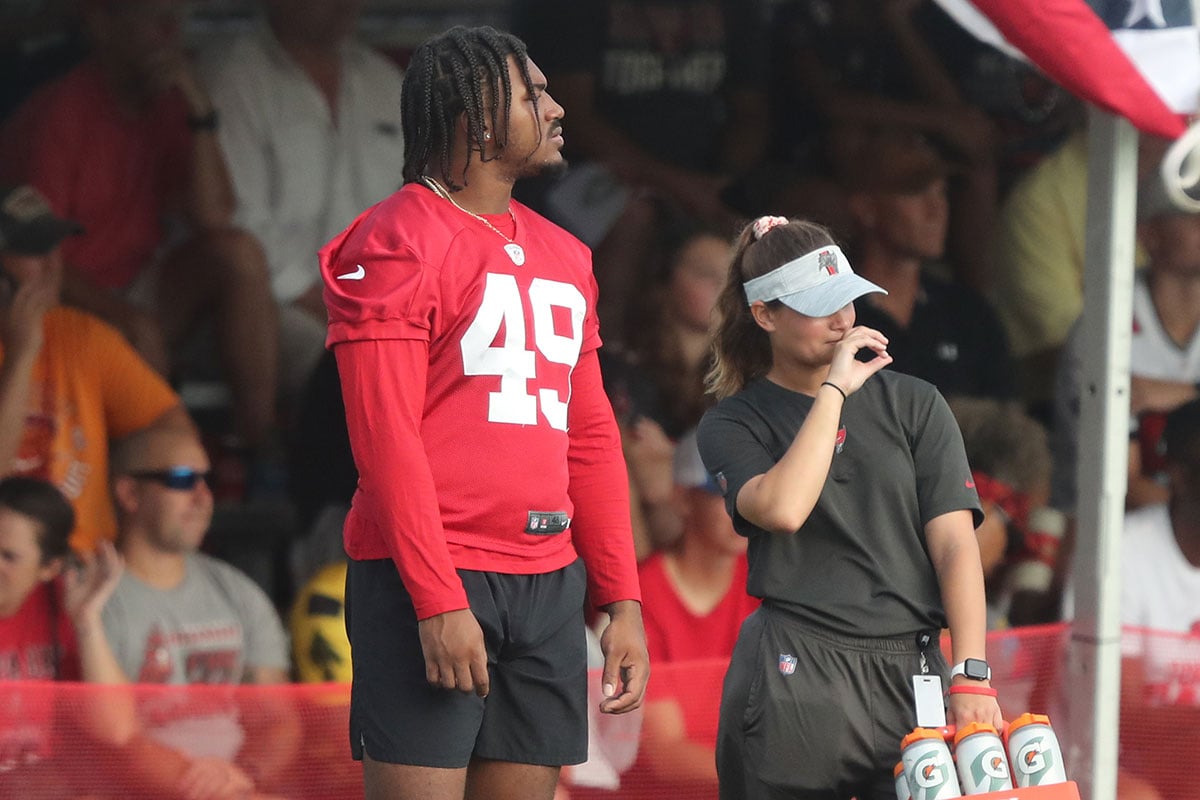 Bucs OLB In A Boot At Thursday Practice

Home » Articles » Bucs OLB In A Boot At Thursday Practice

After returning to practice on Monday and Tuesday, Bucs OLB Cam Gill appears to have suffered another setback. Gill, who sat out most of the first two weeks of camp with an injury, missed Wednesday’s practice. On Thursday, the second-year defender was spotted at Bucs practice wearing a boot on his left foot.

An undrafted free agent out of Wagner, Gill impressed as a rookie, making the final roster and becoming a four-phase special teams player. Gill appeared in 12 games during the regular season, recording six tackles while playing 227 special teams snaps. After playing just 22 defensive snaps in the regular season, Gill got 13 reps in the playoffs. He recorded two tackles and a strip-sack of Patrick Mahomes late in Super LV.

Gill also served as the team’s left tackle on punt team last season. LB Joe Jones has replaced him on that unit during training camp. On defense, OLBs Quinton Bell, Elijah Ponder and Ladarius Hamilton will see an increase in reps with the third team during Gill’s absence. Ponder has played well as a pass rusher in camp, showing some burst and flexibility off the edge.

Gill was expected to compete with Anthony Nelson for the team’s No. 4 outside linebacker spot this offseason. If Gill’s injury is significant, we could see the team move him to injured reserve in the near future. Under the new NFL rules, which will continue this season, he would be eligible to return after just three games.

The NFL just made it official in a memo to clubs: Unlimited players can return from a team’s injured reserve list in 2021 and they’re eligible after missing three games, rather than eight weeks, per source. A popular change spawned by COVID challenges stays for another year.

If I understand this year’s IR rules correctly, in order for Gill to be eligible to return from IR this year, we’d have to first have him on the 53-man roster. This is to prevent teams from stashing players on IR. We can put him there before then if we want to, but for him to be allowed to return, he’d have to have made the team first. Meaning, obviously, that we’d have to cut someone else we plan to resign once we add Gill to IR and expose that player to waivers, which is an obvious risk. This is… Read more »