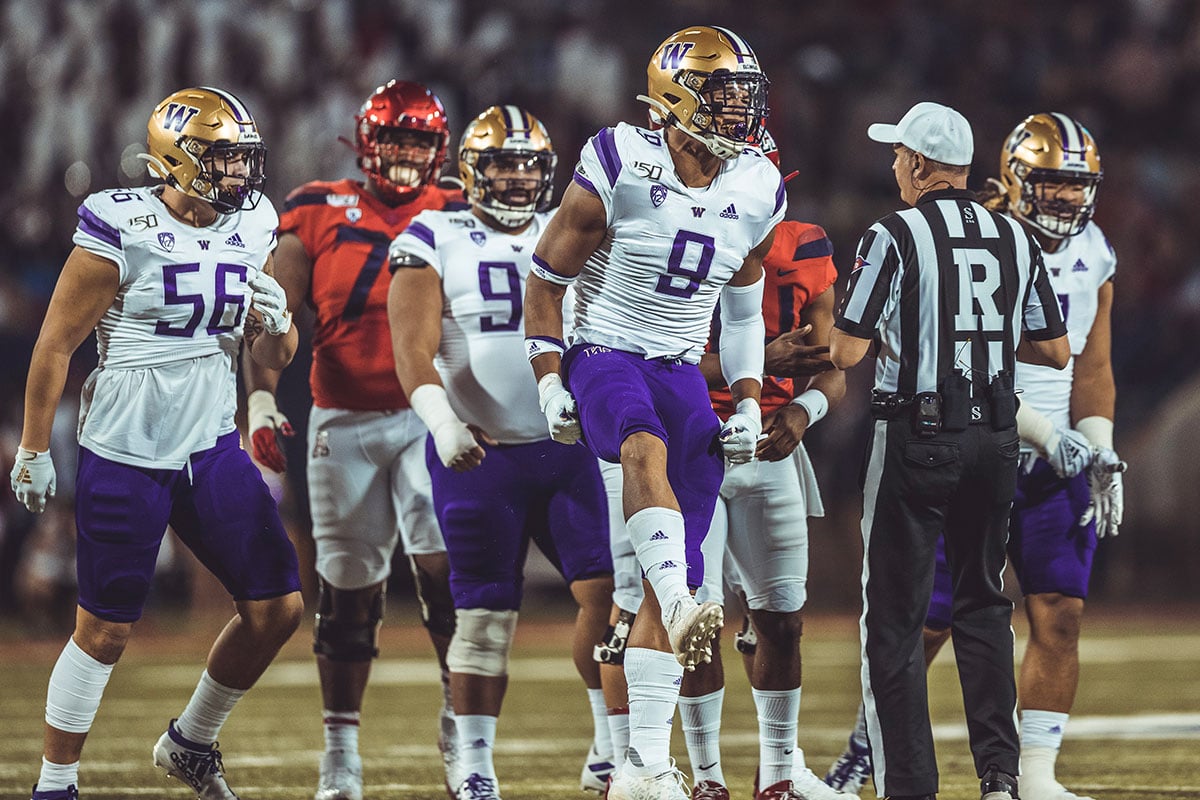 The much-anticipated debut of Bucs first round pick Joe Tryon is going to be delayed awhile longer. Bucs head coach Bruce Arians told reporters that Tryon sat out Friday’s rookie mini-camp practice because he has not yet passed his physical.

“He still hasn’t passed his physical,” Arians said. “He had a slight scope and he’s real close, but we’re not going to take any chances.”

Arians later added that the scope occurred a few weeks ago on Tryon’s knee. The injury is not expected to keep the Washington edge rusher sidelined for long.

#Bucs HC Bruce Arians on why first round pick Joe Tryon did not practice today. pic.twitter.com/6BFz5UVgCK

The 32nd overall pick in the 2021 NFL Draft, Tryon opted out of the 2020 season due to COVID concerns. It has been a long time since Tryon has seen live action on a football field, but Arians expressed optimism that the rookie will return in time for mandatory mini-camp June 7-June 9. Tryon worked out with a trainer on the side during Friday’s practice, but didn’t participate in drills.

Arians says that they won’t rush getting him back.

It could be soon, it will definitely be before mandatory mini-camp. https://t.co/Qduc4Q9hFy

Bucs rookie mini-camp practice continues on Saturday afternoon at 1:20 pm. Tampa Bay recently released a list of 26 players who will attend the two days of rookie mini-camp, including five veteran players on tryouts. Former Bucs WR Amara Darboh is one of the older players trying to earn a spot on an NFL roster once again.

Ok so we passed on Ojulari who was far and away superior to Tryon on tape, reportedly because of medicals. But took Tryon who looks like a late 3rd/ early 4th pick on film despite him not being able to pass a physical and being in need of knee surgery.
None of this makes any sense at all.

So you are the only guy in the world who thinks Tryon is a late 3rd round talent, But then again you probably think the world is flat so why should we be surprised.

The guy who wrote this article literally had him ranked as a 4th rounder before he bumped him up to a late 3rd rounder later on in the process. I guess Jon Ledyard is a stupid flat earther too. Right?

A couple of things, a scope is a minimal procedure to diagnose and possibly treat a possible injury. If all he had was a scope then that’s not at all concerning. If the scope didn’t find anything then it usually takes 6 or so weeks to fully heal. Whatever was done was minor.
Jon also said Rousseau was the 12th best edge yet he was picked 4th. Walterfootball had Rousseau as 3rd best and Tryon as 6th. In fact the order was wrong but all picks in the first round were all 6 they projected.

I understand it’s not a major knee surgery. And while Walter football may be good at projecting what round a player will be drafted in, they aren’t exactly the best at determining which players will be successful at the next level.

And you are saying Jon is? Heck even professional scouts for all 32 teams would be ecstatic being right 2 out of 3 times. Most would be happy to be right 50 percent of the time.

Last edited 1 year ago by TCB2W!

I don’t think he was projected as a late third or fourth but like the rest of the draft picks, it does seem odd. The guy didn’t play all of 2020 but he is getting his knee scoped now. Pardon me while I scratch my head.

No way to spin this but extremely worrying. A young guy needing knee surgery already at age 22 that plays a position that requires lots of twitchy movements and bending. And he didn’t even play last year. So why the need for knee surgery?
One has to wonder if the Bucs knew about this because it’s the type of thing that drops guys down draft boards.

Why now? The guy didn’t play last year. And it wasn’t even Injury related. That’s definitely a concern

The guy without the scope was bit of a risk as pass rushers have high bust rates. Not saying he’s a bust at all but he’s a project that didn’t play last year now having knees issue? No way to spin that as good news.

Also I know friend that researched the hell out of this for his own knee but lot of research and experts say “scope” has no upside over just doing regular physical rehab and only lasts about a year typically.

This kid gets a routine scope and everyone loses their minds haha. We have an edge rusher who lost fingers and later broke his neck…he still came back pretty strong. I’d say this scope is noting to worry about

Coach, is there a procedure call ‘slight scope’ ? What is it?

My goodness! JPP has his knee scoped nearly every off-season, including this one.Tom Brady also had a recent procedure. Yet folks are in a tizzy over our rookie who will be back on the field by Mini-Camp.