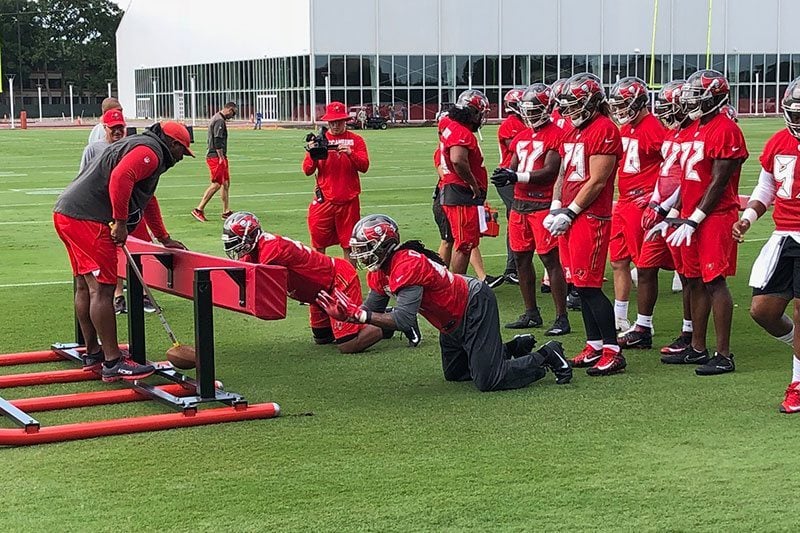 With Rookie Mini-Camp in the rearview mirror, it was time for the rest of the Bucs roster to join the newcomers on the practice field for the team’s OTAs.

Not all of the Buccaneers’ OTA practices will be open to the media (none are open to the public), but Tuesday was the first one that we were able to take a peak at and get Bucs fans some notes on.

These were our big takeaways from Tuesday’s practice.

Jackson Back In Action

See who caught that deep ball from Winston?

The reason why Jackson’s attendance is so important to many is because these practices are still voluntary. Jackson often does his own thing over in California with a speed trainer for most of the offseason, and though he has been out there to do some of that, it was still a question mark as to whether or not he would come back to Tampa Bay before the mandatory practices.

He did, and tat could go a long way in his chemistry with quarterback Jameis Winston.

#Bucs DE Jason Pierre-Paul and CB Brent Grimes were not in attendance at today’s OTAs (as were LB Kendell Beckwith and OT Demar Dotson due to their injuries).

There were two different categories for players who did not participate in Tuesday’s OTAs: those who were still there and those who weren’t. Of those there, standing on the sidelines without helmets, were offensive tackle Donovan Smith, wide receiver Justin Watson and offensive guard J.R. Sweezy. Those who weren’t out there were defensive end Jason Pierre-Paul, cornerback Brent Grimes, linebacker Kendell Beckwith and offensive tackle Demar Dotson. Beckwith and Dotson were the expected ones due to their injuries.

Rookie safety Jordan Whitehead was also not present. He missed the last day of Rookie Mini-Camp with a hamstring injury.

Gerald McCoy and Beau Allen were the first DT paring for all the DL warm-ups: pic.twitter.com/qBDgjMyJ0d

Defensive tackle Gerald McCoy and defensive tackle Beau Allen were the two interior linemen who were taking what you would call the “first reps.” That sort of hinted to us that they would be the top pairing when it came to 11-on-11, too.

That was indeed the case.

Above were the starting lineups for both base and nickel defense from the first practice of OTAs that we were able to observe.

Now, of course, there will likely be some changes. Grimes and Pierre-Paul not being at practice are two that you can plug in and change. But, for starters, that’s a good look at how this team seems to be approaching the new talent on their roster.

They were right. #Bucs DE Will Gholston looks like he lost weight. Looks more comfortable. pic.twitter.com/8uldcyzGyY

Noah Spence wasn’t on the first team for the base defensive, but was rotating in on nickel situations, situations that call for longer down and distances with more potential for pass rush.

What a year it has been for running back Peyton Barber. A year ago Barber was getting the last or second to last reps in the running back drills behind Doug Martin, Jacquizz Rodgers and Charles Sims. Now, as of Tuesday, he was the first man in line.

Barber also started as the team’s top running back during the 11-on-11 drills. Rookie running back Ronald Jones was the second man in.

And since we know you all were wondering, Bucs free agent kicker Chandler Catanzaro made all five of his field goal tries on Tuesday while rookie kicker from Northern Texas, Trevor Moore, went 4-for-5 with his one miss going square off the upright.

The next media OTA is this Thursday. Make sure you check back in with PewterReport.com between now and then for future updates.

Good stuff! Great info today! I spent some time writing for Bucs Report and if these are the types of things I can expect on a regular basis then you guys have a loyal follower who doesn’t mind spreading the news and helping get it out to the Bucs community!

Expect this and more!

Thanks Trevor!! Great job with the info. My only question is this, is there any way to make the videos a little longer? At least on a couple of them. Case in point on the P Barber video. I like getting a glimpse of the players in action, but it looked like R Jones was next in the drill but he was cut off, I would have liked to see ROJO run through the drill, or maybe even all the backs just once, kind of like the D-Line drill. I know, just nit pickin’, but other than that it was… Read more »

By the way, just my opinion, but I really hope we find someone other than Hump to be the punt returner for this season. Actually wouldn’t mind getting 2 new return men. I think Hump does an OK job and he is pretty reliable back there, but we need more speed at both return positions. Hump is just not explosive or fast enough to get me very excited back there.

The RB from Duke might be good for it. MJ Stewart has done it, I think. Jordan Whitehead could be a really good returner if given the chance.

Give Bobo a shot at it

I’m really liking that defensive line rotation, even without JPP. Once he’s added in there we’re looking REALLY good. CB rotation looks pretty promising too. The way he seems to be progressing, I wouldn’t be surprised to see Grimes, Davis, and Hargreaves in the slot. At WR we have a very good problem right now. There’s no way to get everyone on the field who deserves it! Baring injuries, we will be able to rotate them and move them around the field to create some nice mismatches and keep everyone fresh! Can we just skip to the preseason like in… Read more »

Does the rep order really mean anything? Like the coaches tell them exactly how to line up before a drill?

And whats wrong with D Smith?

Disappointing JPP didn’t show up. I know it’s not mandatory, but you would think he’d show for a team who gave up a lot to get him. Superbowl champ Allen needed to lean on Gerry for line calls so there’s much to be learned coming to a new team. I’m wonderring if G- men would’ve released him due to his salary, and we could’ve got him without giving up a draft choice.

Giants wouldn’t have released him, he would have just got traded to a different team. From my understanding we weren’t the only team who had an offer on him.

Yo JPP we need you holla back.

I’d like to see Djax doing the punt returning.