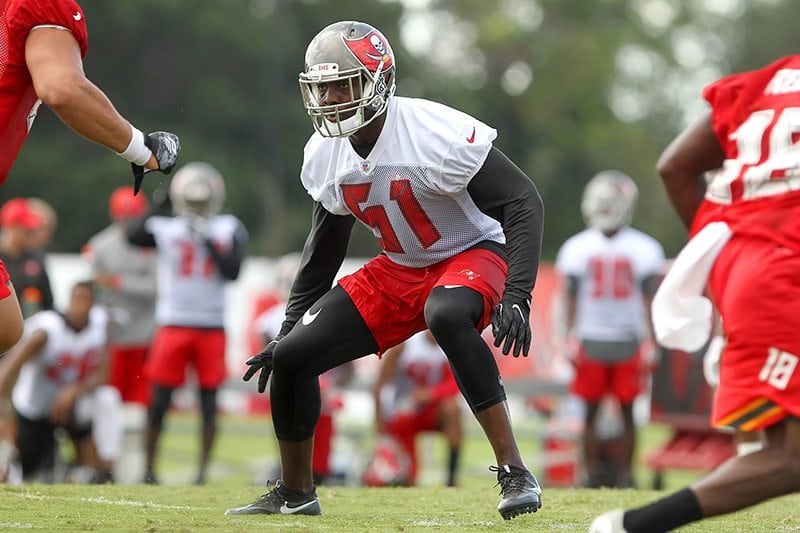 As rookies reported for training camp on Monday and the veterans were set to show up on Wednesday, the Tampa Bay Buccaneers announced that linebacker Kendell Beckwith will not be suiting up with them, at least for now, as the team has placed him on the active/non-football injury list to start camp.

Beckwith underwent surgery to repair an ankle that was fractured in a single-car accident last April. He has since been recovering and rehabbing, and the team has seemed to be positive about his progress. This move for Beckwith to start training camp does not mean there was a set back, as the team wasn’t even sure if Beckwith would be able to play in Week 1 back when the injury occurred.

“Right now it’s unfair to give a timeline as well with him,” Bucs general manager Jason Licht said. “We’re very fortunate that it wasn’t life-threatening for him or the [driver]. We’ll probably hold him — he’ll be out of OTAs, and in training camp we’ll have a better idea of how far along he is.”

The Bucs can activate Beckwith at any time during training camp while on this list, so the next month will be a real evaluation for how close he is to being game-ready. If he is not re-activated to the team by the time the Bucs announce their 53-man roster at the end of the preseason, they will have to place Beckwith on the physically unable to performa list (PUP), which will sideline him for the first six weeks of the regular season.

This guys leg injuries are most unfortunate. I hope he can recover from this as well as he did the ACL.

This sucks training camp not even started yet and an injury making a problem. Hope LB starters stay healthy. Beckwith played special teams too I think last year…

I think that LB Kendall Beckwith will be back before the end of camp and ready to play before 6 weeks into the regular season. He has a strong work ethic and has recovered ahead on schedule with his previous ACL injury. Rick Stroud reported that RT Demar Dotson, who missed the final five games last season with a torn PCL and also underwent meniscus surgery in the off-season, is expected to be cleared to participate in training camp but will be evaluated by the team again. So that’s good news. In other news, after the Bucs late-June release of… Read more »