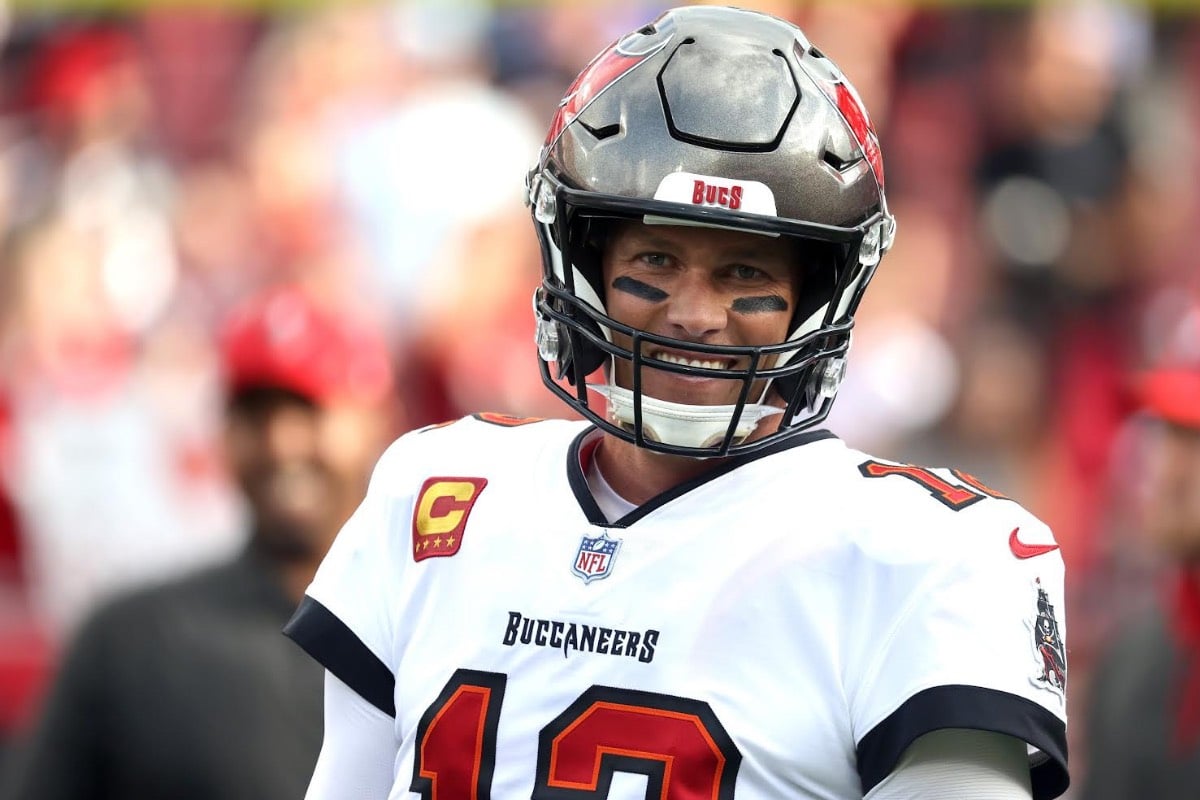 When Bucs QB Tom Brady announced his retirement a week ago, Bucs fans were ready. Days earlier, ESPN’s Adam Schefter and Jeff Darlington reported that the news from Brady was coming. And listening to the star quarterback’s own words on his “Let’s God!” podcast with Jim Gray, it’s clear he had been thinking about retirement.

But just when acceptance was setting in for Bucs fans, Brady left the door to hope cracked. On this week’s edition of the “Let’s Go” podcast, Brady made it clear that he won’t completely rule out a return from retirement.

“You know, I’m just gonna take things as they come,” Brady said. “I think that’s the best way to put it and I don’t think anything. You know, you never say never. At the same time, I know that I feel very good about my decision. I don’t know how I’ll feel six months from now. [Something could] change, it most likely won’t.

“But I try to make the best possible decision I can in the moment, which I did this last week. Again, I think it’s not looking to reverse course, I’m definitely not looking to do that. But at the same time I think you have to be realistic that you never know what challenges there are gonna be in life. Again, I loved playing. I’m looking forward to doing things other than playing.”

That’s a pretty interesting response from Brady. He could have simply said, “Never say never, but I’m almost definitely not going to ever return.” Instead, he talked through his feelings about a potential return pretty extensively. Of course, it’s highly unlikely that Brady returns. But until the GOAT completely takes it off the table, speculation will run rampant until Week 1.

To listen to “Let’s Go!” on Sirius XM in it’s entirety, click here.

Translation: I literally only retired to placate Gisele. If this doesn’t work and my marriage continues to go south, I’m 100% going to rush back to the game as quickly as I can get to it. I only gave it up because I love my wife too much to lose, but if it turns out that that’s happening either way, then I’ll play until my arm falls off.

Giselle is the driving force to Brady’s retirement but I believe he stays done. Marriage is far from going south. He loves her and after 22 years, he’s got nothing left to prove.

I think any marriage in which one person gives up the thing they love most in the world to make the other person happy is necessarily on thin ice. I genuinely hope he doesn’t grow to resent her for her seemingly making him give up football before he actually wanted to. Time will tell. I obviously don’t know them, but just going off of some maybe speculative reports, along with reports of them being in marriage counseling….I’m just saying. If they were having a tough time, and TB gave up his passion in an attempt to fix that, and it… Read more »

To be fair, I don’t think we’d care too much about marriage advice from someone who’s been in multiple failed marriages, either. I mean, who better to talk about the reasons for failed marriages, but clearly they aren’t actually knowing what right things to do – or right people to be married to – if they keep ending up in divorce.

We didn’t realize that you’re an expert marriage counselor.

Just like your an expert coach, GM, and overall know it all moron.

It’s just him, not the room. He’s always an asshole.

You’re quite the piece of work, taking the opportunity of the mildest of all possible ribbings of another commenter and using it to go off and prove yet again that you’re an insufferable flaming asshole.

You are in dire need of immediate psychiatric intervention.

He’s had “nothing left to prove” for some time now. For guys like Brady, that maxim is not one that they use to keep going. They use different maxims.

i mean guys retire than come back, it definitely happens. Gronk did it, Jordan did it, among others. Brady might be a little different because of how old he is, but the man can definitely still play. For the love of God please come back Tom

Yea, I could go for a “Haha just kidding, let’s run it back” any day now. Would make at least 2022 a much more fun year.

The longer we go into this off-season with Gabbert and Trask being the top two QBs on the depth chart, the more convinced I’ll be that there’s an unpublished “Brady’s returning” tweet on all the beat writers accounts that’s just waiting for the “send” button to be hit.

Can we please move on…….he’s not playing this year so what’s the plan? There’s more of a story – not this crap.

Here here! This is what you get during a slow news period, basically girlie gossip.

He’ll come back a 9er.. the final box to check for him, donning the uniform that he fell in love with first and started it all…

You may have a point here, because also in the podcast, he mentioned that if a team needed a quarterback due to an injury or something it could be enticing. I don’t recall him mentioning the Bucs when he said this. So this made me curious about what he might have been hinting at. Is it possible that his relationship with the Bucs has been fractured, leading him to exit earlier than he was normally was planning? Something to think about…

This is funny reading as a few Buc fans are in denial. GOAT is just marketing his product . Next thing you know, he’ll be part of the “Reverse Mortgage Spokesperson and the new Replacement for Progressive Insurance person; can’t forget the Kentucky Fried Chicken guy either; first though, will the Guest MC for Saturday Night Live gig. It’s over folks; let it go. This is now and get on board and support our Bucs!

Here’s the thing, when training camp starts and Brady is sitting at home watching it on the NFL Network, he’s going to start thinking to himself; “What have I done? I was an MVP candidate! And now I retire? I screwed up!” Or possibly; “What have I done? I just won the league MVP! And now I retire? I screwed up!” Either way, he’s going to realize he screwed up and maybe left too soon. Once your done at his age, your done for good. There will be no coming back after sitting out a year. It would be much,… Read more »

See, I think Brady would be much more content going out looking like Peyton than going out like he (currently) has. At least with Peyton, you know there’s no questions left about whether you can still do it or not. Peyton (and Brees, and Big Ben, and pretty much all the other great QBs of the last 20 years) were clearly washed up and incapable of being proficient QBs anymore. Brady threw for 5000+ yards and will be likely the MVP runner-up. As incredible as it is that he has shown zero signs of being washed up at 44 years… Read more »

Turn the page. Brady is done. It’s more than surprising that he lead the Bucs to a Superbowl in his first year, even if there were no fans and many players missed time or opted out due to Covid. It would be nice if the Bucs had a young gun slinger to compete with the new wave of star QBs that dominate the AFC. Mahomes, Allen, Herbert, Jackson, and Burrow will be dominant forces for years to come. Bucs should have given their own home grown 1st overall pick some consistency at the coaching position, but alas, that’s not what… Read more »

JMO but I am not buying that retirement was Tom’s or Gisele’s Idea. It was just to get the talking heads off the topic so he could decompress like anyone would do before making a real life changing decision. Clearly, the Brady “haters” want the retirement to be permanent. In the end the real decision hasn’t been made. The whole spend more time with the kids and family is BS as these NFL players spend more free time with their family than any normal family in which the father works. Gisele, while she still does modeling from time to time,… Read more »

You’re not buying that it was Brady’s idea to retire? Lol.

Wake up. That is foolish. He is done. No conspiracy or outside forces pulling his strings. No reason to lie to the world. He was 100% certain he was ready to retire from professional football.

Being a Colts fan, I’ll bet you’re thrilled that Brady retired. Too bad he exceeded your expectations before doing so.

Obviously it would be great if TB12 came back for one more season but the team needs to make other plans. We as fans need to stop holding out hope that the GOAT comes back and put our support behind whoever our QB is this coming season. Ideally, Trask will get on the field and prove all the doubters wrong. No matter who is under center, we’ll be looking at a drop off (possibly steep) so the team will need to build up that defense to make up for any offensive dropoff.

You and I think alike on this one Plopes. I think the roster, on both sides of the ball, has more talent than most teams, and doesn’t need the GOAT to achieve a degree of success. Teams, not elite QB’s are what wins games………just ask Mathew Stafford. You need a little of both. I’ll be cheering for whoever becomes the QB and certainly won’t hope they fail because of an agenda.