According to the NFL Network’s Tom Pelissero, free agent running back Ronald Jones is headed to the Kansas City Chiefs. The deal is for 1-year with a payout of up to $5 million. Jones was drafted in the second round by Tampa Bay in 2018 out of USC. The 24-year old fell off drastically in 2021, his fourth season with the Bucs.

Ronald Jones can earn up to $5 million in Kansas City, which continues to add after the Tyreek Hill trade. https://t.co/n77MgDSbwB

After a disappointing rookie season where he barely saw the field, Jones produced two very solid seasons in 2019 and 2020. Over that stretch the running back carried the ball 362 times for 1,702 yards (4.7 ypc) and 13 touchdowns. He also caught 59 passes for 474 yards and a touchdown during that stretch. In 2020, Jones nearly reached 1,000 rushing yards. But a late season bout with COVID and a fractured finger kept him from the milestone. 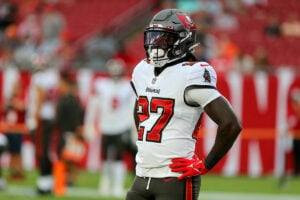 Jones entered this past season as the lead running back for the Bucs, but lost the role early in the year. Issues with ball security, drops and mental errors in pass protection led to significantly less playing time. In fact, Jones finished the season with a pedestrian 101 carries for 428 yards and four touchdowns. As a receiver, he managed just 10 receptions for 64 yards. For his career Jones has registered 488 carries for 2,174 yards and 18 TD’s along with 76 receptions for 571 yards and a touchdown.

Jones’ departure is of no surprise after he fell out of favor last season. Throughout his time in Tampa Bay, consistency eluded him despite his talent. Now he’ll slot into a backup role in Kansas City behind Clyde Edwards-Helaire, where they’ll hope he can blossom in his third offensive system.

Although Jones’ absence may prove to be addition by subtraction, it leaves the Bucs thin at running back. Leonard Fournette and Ke’Shawn Vaughn are the Bucs only running backs from last season set to return. As a result, Tampa Bay could be searching for a running back in free agency and in the draft. Stay tuned.

I keep writing mean stuff and deleting it.
Good luck, bro. Hope you find your groove in KayCee.

Good for RoJo. But that division is going to be a battle this comming season- I don’t see KC as a clear #1 this year.

Before a few of the..Nega-teers start like they did on that other website, I’ll just say, Good luck to you Roe Joe. And much thanks for your contributions to the BUC NATION. You are going to a good team and we wish you the best.

Good luck to RoJo. Unfortunately he was pretty much a bust here. Seems like lot of money for a RB with band hands, can’t pass protect, ball security issues etc, but that’s their problem now. He is a good pure runner at times for sure. Bucs want to get better at running the ball so this is a good start and not a surprise like mentioned already.

Only you would consider RoJo a bust. He may not have lived up to your lofty standards but his hands improved and he was always a good RB. If you want to blame his lack of pass catching skills on anyone, throw your shade at Licht. What was he doing using a high No. 2 draft pick on a RB who didn’t have pass catching skills and putting him in a pass first offense.

When we Drafted him, catching passes wasn’t a necessity for our RB. His hands did not improve either, he was always a hold your breath kind of guy whether running or passing. I hate it because he was actually a very dynamic runner. He had much better vision than Fournette ever has, he just never could get past the nervousness of not dropping the ball and struggled mightily in protecting the QB. A change of scenery may do him good. I always always rooted for him but we need new blood, someone who can do it all and has better… Read more »

Rojo reminded me of a Jerry Eckwood decades ago. One play he would look great the next two plays, eh?

There’s a blast from the past Horse. I have Jerry Eckwood’s #43 practice jersey and always wear it to the Throwback Game. Jerry’s career ended too soon due to injury. I remember the Chief’s playoff game in 1979. Jerry took 28 pitch (aka student body right) and was running down the right sideline with no one near him and he simply dropped the wet ball. He and the late Ricky Bell were the original Thunder and Lightning.

I admire RoJo for all he overcame during his time here in Tampa Bay. He has the “want to” required. He was not blessed with the catching skills and experience needed in our current scheme. He was drafted for the previous coaching regime’s purposes. I wish him well!
________________
Go Bucs!!!

He’s still very young (hasnt even turned 25 yet) so we likely havent seen his best yet. Pass pro skills and hands can develop. I wouldnt have hated seeing him signed on a cheap, longer term deal he could continue to grow under but it wasnt in the cards for us. He could thrive in the right system, maybe KC can make better use of him.
With us signing 3 and losing 4, are we now in line for a comp pick in 2023?

Last edited 3 months ago by Bucc My Life

i don’t know whose dog house these guys get into but once they are there, it’s hard for them to get out.
First Justin Watson and now RoJo. Seems odd they aren’t good enough to play for us but the Chiefs were happy to snap them up.
I actually think RoJo’s hands improved as the seasons went on but he did keep blowing pass coverages. He might get away with it with the more mobile Mahomes but it was a bozo no no around here.
As a runner, he’s better than Lenny.

I agree with everything you said. Not sure about Watson being in a doghouse. In my view whenever Justin had his opportunities he didn’t make the most of them with injuries, drops and incorrect routes. Kid has a lot of physical ability. I hope he puts it all together.

Bucs kept the RB that Brady wanted them to.

The best to him.

Good luck RoJo. Best pure runner we had. When we drafted him it was to run, not catch and block with BA it became square peg…. 2020 prove what he’s capable of. Best of luck.