The Bucs opened their OTAs on Tuesday with all of the veteran starters absent. That was just fine for second-year running back Ke’Shawn Vaughn, who needs the reps and has some catching up to do after a lackluster rookie season.

“It was mostly the older guys who weren’t here,” Vaughn said. “The ones who were here wanted to get a jump start on it.”

Vaughn, a third-round pick last year, had modest production as a rookie. He rushed for 109 yards on 26 carries (4.2 avg.) and caught five passes for 34 yards and a touchdown, which proved to be the game-winner in a 17-point comeback against the Los Angeles Chargers in Week 4.

Two early season turnovers buried Vaughn on a depth chart that included veterans Leonard Fournette and Ronald Jones II. Add in another veteran offseason signing in Giovanni Bernard and it will once again be a challenge for Vaughn to get touches in games – or even dress on Sundays. 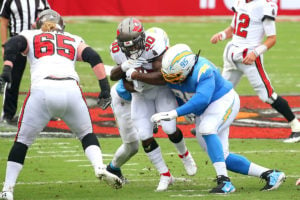 To see more playing time Vaughn will have to excel on special teams and do a better job of catching the ball. Vaughn was targeted nine times last year, but had three drops, according to Pro Football Focus.

“What I was working on this offseason was getting used to catching the ball,” Vaughn said. “Not getting used to it – but getting more comfortable with it. Then learning the playbook and understanding the details my teammates are looking for running these routes when I’ve got the ball.

“My job is just to go out there every day and compete. I leave the rest up to the coaching staff and whoever decides who plays and who does not. I can only control what I go out there and do. Besides that, I love the running back room. We have good energy in there. I met Giovani probably last week or so. He’s a good guy to be around and learn from. He gave me some good pointers on his game.”

“We talked about it a little bit today – catching the ball off balance, twisting, turning, working on his hips and getting a little more flexible so he can catch some balls behind him because he’s got really good hands,” Arian said. “Just little things like that. He’s got great vision and we’ve always loved him as a runner, so it’s just a matter of continuing to improve as a pass receiver.”

Vaughn is donning a new jersey number this year. He switching from No. 30 to No. 21 in honor of his idol, LaDainian Tomlinson. Vaughn admitted that last year was a challenge for him transitioning into the NFL without the benefit of an offseason program or a preseason to get necessary reps.

“The most difficult thing for me was mentally rather than physically,” Vaughn said. “I wasn’t getting a lot of reps and things weren’t going my way. … I came into it with Tom Brady expecting you to be ready right now. His expectations for me were high. It was a lot, but mentally I figured it out and slowed the game down. Now I’m ready.

“When I’m out here at practice it’s showing them that I’m capable of doing everything – catch the ball, run the ball, block – whatever needs to be done. That will gain their trust. Once I gain that trust everything else will fall in place.”

While some Bucs veterans are opting to stay away from the voluntary OTAs, Vaughn doesn’t have that luxury. He’s trying to make up for lost time.

“This offseason is going to play a big part being that I know what the expectations are,” Vaughn said. “Coming in last year I didn’t know what to expect. I just knew I was going to the league – I didn’t know how practices were run. I didn’t know the intensity. And I didn’t know the expectations of other players on the team. Everybody out here is good. Details will set you apart because everybody is so good. That’s something I was learning last year. Small details matter. It doesn’t matter about 60-yard touchdowns. What matters is helping the team get a first down and keeping the drive going. That’s something I’m picking up on. While most of the team’s veteran starters likely won’t be at One Buccaneer Place until the mandatory mini-camp in early June, Vaughn once again expects to soak up as much knowledge as he can when they arrive.

“Just being on this team with so many future Hall of Famers around there’s nothing you can do but learn and steal parts of their game and kind of put it in your toolbox,” said Vaughn, who was inactive for Super Bowl LV. “That’s the big thing. Taking what’s around you and using your resources – Tom Brady, Chris Godwin, Mike Evans – whoever is around. Those are future Hall of Famers.

“Being around those guys makes me want to work harder and be that future Hall of Famer. Then the expectations are already set. I know what it takes to get there. I know what needs to be done to get there. For me it’s playing in a Super Bowl – that’s my next step. I won one. Now I want to play in one – and win one.”

Lofty goals for this young man. If he just keeps working hard. His opportunity will come and once you show and prove you can produce he will get a chance somewhere.

Thanks Mr. Scott Reynolds! I’ve been dying to know why he changed jerseys!
Go Bucs!

Talks about being a Hall of Famer, but was shocked by Brady’s expectation level. SMH.

The Bucs raved about this guy’s pass catching and receiving ability when he was drafted. I remember reading quotes from Licht and co even using it as a big reason why he was drafted in the 3rd.
Didn’t make sense to me then given he was coming off an average receiving year in college. And looks even worse now.

I wish you guys a PR would quit harping on his “two” fumbles since one of them was when Brady led him into a vicious hit by a Bears safety. You guys make it seem like he has a fumbling problem which I don’t think he has.
Other than that I love the fact he is attending OTA’s and soaking up the experience and knowledge of getting more reps and practices. He has a great attitude and I think he will be a good back this year if he gets the chance.

I agree with drdneast, he doesn’t have a fumbling issue. I like this kid, he has some wiggle to him and just needs reps. Knowing when and we’re to be on the field on every snap will get him the playing time to showcase his talent. I think he runs alot like Emmitt Smith when you watch the college tape.

Having his positive attitude and motivation will help him along this season.. Not having any offseason work definitely didn’t do him any favors.. I like the way he ran last season, and was disappointed when they stopped giving him the ball after the 2 fumbles..

Vaughn’s sample size was too small to conclude anything and he was a rookie. I am glad to be hearing him heading in the right direction.