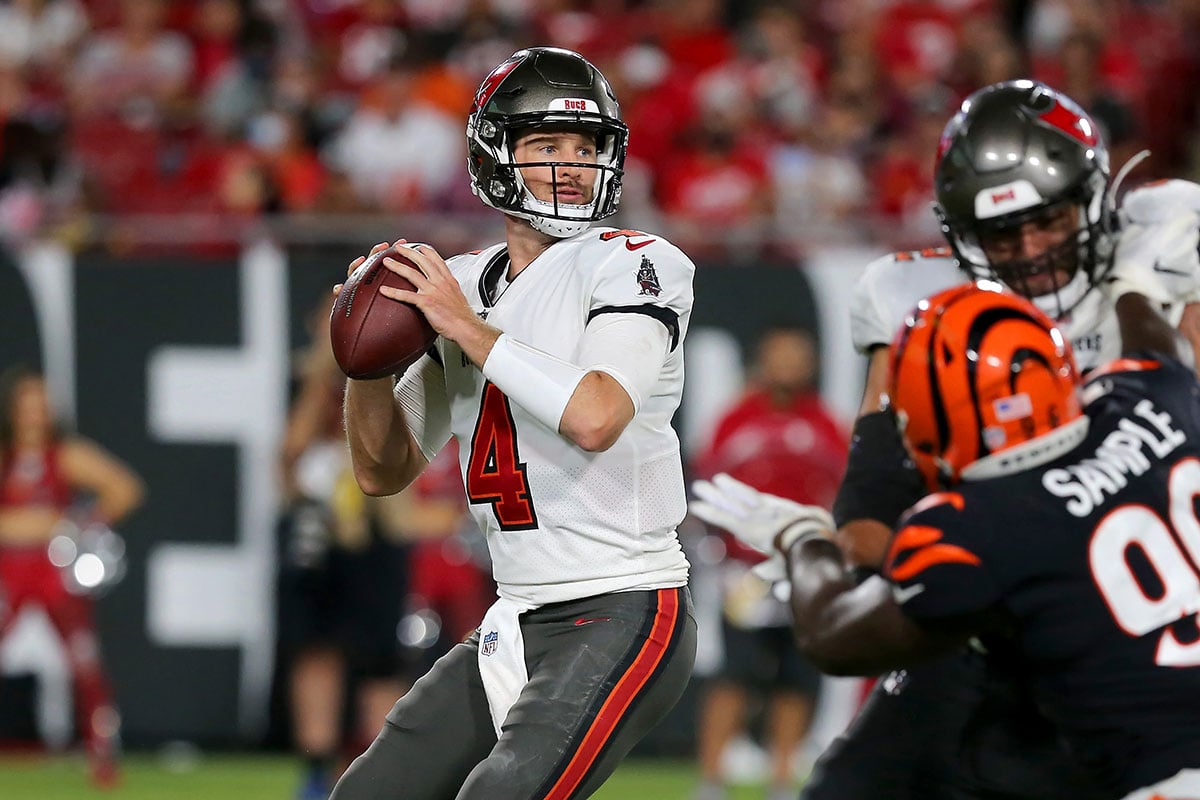 On Thursday, the Bucs announced that they have re-signed backup quarterback Ryan Griffin. The move gives the team three quarterbacks on the roster in Tom Brady, Kyle Trask and Griffin. Last year’s No. 2 quarterback, Blaine Gabbert, remains un-signed at this time.

Griffin is already the longest-tenured quarterback in franchise history after playing his seventh season with the team last year. Now the 32-year old will try to extend the streak as he vies for his eighth season on the roster. Griffin spent most of last season on the practice squad, failing to dress for a single game. In his career, the backup has thrown just four passes, completing two for 18 yards.

The Bucs are likely to give Trask every opportunity to win the No. 2 job this offseason. Griffin shouldn’t present much of a challenge, as the veteran struggled mightily in preseason action last season. If Gabbert is re-signed, there could be real competition between he and Trask. But the Bucs may just want Trask to assume the responsibility, letting Gabbert chase a chance at playing time elsewhere. Either way, don’t expect Griffin to be a factor unless the Bucs face a rash of injuries at the position.

Forget Suh and that extra edge rusher we need so badly, now we are locked and loaded. Start booking those flights to Glendale.

… not without Blaine Gabbert we aren’t. Abandon Ship!

It’s almost like a gag that they just keep rolling with just because. I mean, he probably knows the Offense better than anyone and can tell you where the good doughnuts are in the morning. Hopefully he will just be heading up the Practice Squad again. If the Staff has any brains, they will attach Trask (and Griffen if he comes back) to Bradys hip, dress them both every game, and hope they soak up as much knowledge and awesomeness as they can.

They can certainly gain a lot just by watching how Brady conduct himself and run the offense.

Story of the year developing. Brady and Trask go down in the first half of week one and Griffin leads the team to a perfect 20-0 record to win Super Bowl 57. Scoff as you like, right now this has a better chance than one of us winning a major lottery.

Not seeing the need for Gabbert. Use the money for Gronk & Suh.

Gabbert is realistic the back up to Brady, we need him signed

If we don’t re-sign Gabbert it will say a lot about how our people see the progress of Trask. Even if we do, after the draft the QB pecking order is going to be fun to watch as it unfolds.

I think the Bucs keep Trask at #2. Gabbert is gone.