Bucs Ride With Another Bronco, Pick Boise State RB McNichols In Round 5 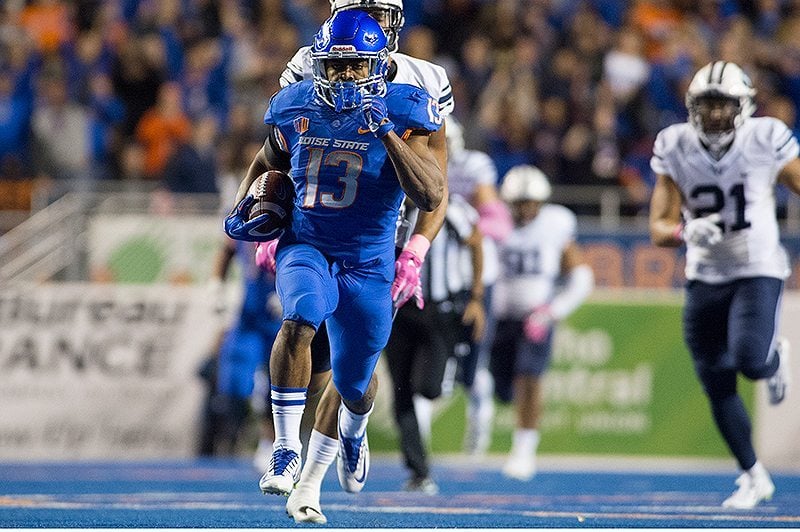 Bucs Ride With Another Bronco, Pick Boise State RB McNichols In Round 5

With the 162nd pick in the 2017 NFL Draft, the Tampa Bay Buccaneers selected Boise State running back Jeremy McNichols.

With with 162nd pick in the 2017 NFL Draft the #Bucs use their fifth-round pick to select Boise State RB Jeremy McNichols.

McNichols (5-foot-9, 214 pounds) ran for over 3,000 yards in his two years as a starter at Boise, recording 43 rushing touchdowns in the process. He also has more than 1,000 career receiving yards and 11 receiving touchdowns in his career. McNichols ran a 4.49 40-yard dash with a 35.5-inch vertical jump at the NFL Scouting Combine last month. Though he may not be a bruising back due to his size, he has power to get through contact, and, of course, an elusive play style that is easy on the eyes.

McNichols is the first Boise State running back drafted by the Buccaneers since the team drafted Doug Martin in 2012. The team made it clear on Friday evening that they believe in Martin’s progression and his potential return to form as the starting running back. But, drafting McNichols gives them insurance at the position, if nothing else, but for if or when an injury happens.

Productive catcher and runner and good value in the 5th round. Worth it as a project to keep around to develop.

Haha , it’s like Tampa said here is your clone Dougie. If you don’t succeed, you will be replaced. All joking aside, he’s a much better catcher than Dougie. His measurables are almost identical to Dougs coming out of the combine. It was definitely the best RB left on the board in terms of production so that’s a good thing. I’m rooting for him as we need a little infusion at rb.

I would not be surprised if McNichols replaces Sims once Sims’ contract is up. But yes, this is the plan B for the Bucs if Martin has another slump.

I agree. Sims has been a let down, IMO. This guy appears to have much better hands and can/wants to pass block plus has had monster production in college. He is also coming in already familiar with Koetter’s offense. I dunno where he’ll end up on the depth chart but he looks to be a lock to make the roster and will improve our group of RBs. Sims might stick and Barber might be the one to go though.

Not so sure about that one…I think Barber has been impressive between the tackles. This guy seems to fit the mold of Sims a little more

I agree to an extent and that went through my mind. Barber is probably the closest thing we have to a “pile mover”. Also since I posted that I didn’t have the complete picture of Sims injury problems. He is too often hurt. Sims is also a liability when he has to block in pass coverage. This morning I’m leaning more to dumping Sims if room is needed. You now I really like what I saw from Jack Rodgers last year. He’s a no nonsense hard runner. I hope he can come back this year strong and healthy. I noticed… Read more »

Agreed, our passing game looks scary! Pick your poison, there’s no way to cover everyone. This should also open things up in the run game as well

After the first round this draft is an D-. Wasted chances. An injured LB?? That’s going to be helpful and we actually moved up for him. Might as well have moved up and drafted another kicker.

That injured LB will anchor SAM once he returns. Bank on it.

I’m surprised that so many are missing that we were way too thin at SLB and we lost a guy too from last year. In a nickle package we can use Spence but we needed a true run stuffing SLB. The reports I’ve read say he’ll be healthy by preseason.

Love the name “Ron”. They’re missing it because they don’t really pay attention to the current roster which, by the way, lost it’s starting Sam LB and expected either the 2016 6th rounder coming off an injury, (Bond……Devante Bond) or undrafted F/A’s (Lynch, Knox, Glanton) to replace him.

Good news is he’s already running and cutting. He should be ready in time for camp. We needed a Sam to fill the void left by Daryl Smith retiring and we found one in the bottom of the 3rd. Time will tell but it seems like we got a good value thanks to the injury

Evans will be a steal if he can correct his problem with missing tackles. his aggressiveness in the back will be something this defense has missed in the back side for a while. he has awesome range and can really make this defense special with his elite physicality. think about the difference in energy we get from kwon compared to David. both great LBs but kwon has a level of aggression that’s infectious to our front 7. that’s the same effect evans can have to our back end. Great pick Bucs !

I see a lot of fans upset, primarily about the Evans pick more than any other. I don’t watch college ball so I won’t gainsay someone else’s preferred pick but just wanted to add something that has been referenced but not said outright that I’ve seen in these comments. Tackling, and open field tackling especially has a lot to do with will and drive as much as anything else. Especially when tackling a 240lb back or tight end. Evans CAN be taught how to tackle in the NFL, how to have a better sense of when to go for the… Read more »

Did you notice that Licht is from Idaho? That explains why he has stuck with the Muscle Hamster from Boise State, despite his durability and trust issues and poor production last year before he was hurt, and ignored our local USF Superior Running Back and all FSU Fans wanting Cook right along with Jameis; both these backs can take it to the house. Instead he has used our fifth pick to draft another Boise State poor clone of shrimp Dougie. Hopefully the new guy is no druggie like the Muscle Hamster. When Peterson is running all over the Bucs for… Read more »

There’s only one “m” in Sims. Why do people keep adding it?

All the backs we now have will have to earn their jobs. I think Barber, Quizz, McNickel wil stick. We’re only going to keep four backs. When Martin is ready to return week four a decision barring injury will have to be made.

love this pick, hoping they would get him. I follow BSU, watched most of his games. He’s a great pick especially getting him in the 5th. I think he’ll jump ahead of Sims quickly.